I have a dilemma, a 7mm mag im loading for with H1000, 168 vld's and 215M primers shoots really well at min load and a bit above max load, that's it. The load above max is shooting 3080 fps out of a 26" barrel and showing slight ejector marks. I would like to be able to find a way to safely load this higher node. So my question is has anyone had luck changing to a different primer that isn't quite as hot as the 215M, slightly lowering velocity and still keeping the same accuracy?

A change in primer will change the ballistic of the load. 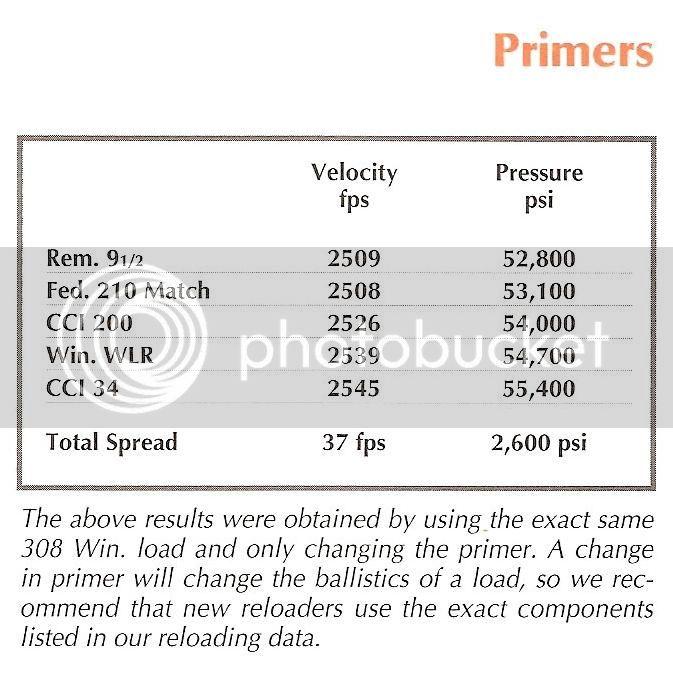 Yes it will but it will be a lot more influential and noticeable on small capacity cartridges.
S

So in looking at this it seems that various primers are "hotter"? That seems like a fairly drastic change in CUP. 2600 PSI could take a load that is ok to one that is blowing primers. Are these primer numbers linear across the board or do they vary between different calibers/case manufactures etc?
C

Yes, some times one primer will be "THE" one for a certain cartridge, powder, bullet combination.
I had tried H1000 in my 30-338WM when it first came out and could never get it to work very well. I was using magnum primers because it is a magnum cartridge, makes sense. I gave up on it until years later I came across someone who was using cci200's so I thought it may be worth a try. I worked up a load that shot well with the 200's and then shot groups with the same load using every primer available. The groups went 1/2" and larger till I got to the F210's. Same load went under .2"!!!
I normally keep some of every make of primer on hand and if a load doesn't come together fairly soon I will try them all.

Str8shooterTX said:
Are these primer numbers linear across the board
Click to expand...

Nothing in reloading meets this condition. Anything you're absolutely sure of -fails tests elsewhere.

There are other variables other than the primers themselves, that are usually overlooked. Your powder is the biggest. There is local seating and striking of primers. And load peak pressure, and flash hole sizing..

Size of the cartridge as a factor will fail tests. A 6PPC loaded to common pressure node with N133 will wiggle a bit in results from different primers, but relatively little(to most of us). That peak pressure of ~75Kpsi greatly covers for initial ignition quality.
But if you're running a lower pressure load that just nails it, then regardless of case size, it will be very sensitive to ignition quality/variance. A given primer might not be the root cause of an issue here. It could be firing pin spring, pin setting, trigger geometry/release. It could be pocket variance and primer seating variance.
C

Any time a component changes you have to re-test and adjust if necessary. Even if you stick with the same brand but get a new lot, testing is a good idea to make sure the load is still on point with what you want.
R

I recently did a test of my own on the primer subject.. Fed215's vs RWS LR primers to be exact. The research I-did (before-hand) showed the Fed215 to be the most abrupt and hottest ignitions of all large primers. What I did to test it was load single-charges for my caliber in one-grain incriments (with each primer & each brass-brand) until I hit pressure. Then, once settling on a safe max loaded five of each to to record what I saw for difference...

The way it went was as expected. Fed215 showed roughly 50fps faster loads with tighter ES in velocity (vs the RWS) in ALL the brass brands I tried, however, the group-sizes themselves weren't effected like I thought they'd be. Whether that is because I settled on an ideal accuracy node or what, and the velocity spread between primers didn't sway enough to take the load outside that node, I don't know. But to answer your question, depending on your bullet/caliber & how the load itself was dialed in, a primer change may not hurt your group at all-- but attention should be given to re-verify things in a proper manner

In your case it's very possible a softer igniting primer will help come (slightly) off and away from that pressuring ejector mark.. but take that as a possibility only! Load a few up and try it to see. Good chance it'll work.

...only other thing you could do is try a different batch of brass. Neck tensions almost always vary between "lot's" of brass (even of the same brand) & that will alter pressure, as will the capacities of the different brass. The pressures are without a doubt effected by those two things and sometimes it is drastically* But that does open a whole subject in-itself. If a guy's going to ride that line on max, you have to have it-all down to an art, it's not advisable, but it is doable.
B

I then used the same load but switched to a std F210GMM primer.

Switching from a 215m primer to a Br2 in my 257 Weatherby allowed me to shoot the same load with no pressure issues.
You must log in or register to reply here.
Share:
Reddit Pinterest Tumblr WhatsApp Email Link