I headed out last week to hunt Unit 62 in Colorado in the Uncompahgre NF. I ended up hunting by myself due to a couple friends drawing tags for different seasons, but decided to make the best of it. I went out into the hills a couple days before the season started and verified my zero on my 7mm Mag and Pentax Ballistic Plex reticle. I found some rocks at 400 yards and nailed them with several shots straight. After that was done, I drove around and did some glassing of several different areas looking for deer. I put about 100 miles on the truck and looked at several different locations but only located any deer at all in one small area. I saw 7 different bucks with one of them being a definite shooter. He was a 4x4 with decent forks and a spread out to the ear tips. There were a couple smaller but decent bucks and the rest small 3 points or fork horns.

Opening morning of season found me still hunting along a bench where I had seen most of the deer. After about 45 minutes of easing along I spotted some deer on the opposite hillside but they spotted me at the same time and took off at a trot. They were all bucks and one of them was the nice 4x4. I dropped down into the ravine and tried to head the deer off as I angled up the hill through the trees. If I had gotten up there about 10 seconds earlier it would have worked. As it was, the nice 4x4 trotted out ahead of me and stopped to look back at me. I didn't have a clear shot through the quakies, so after he stood for about 10 seconds I watched him stot over the hill. I don't know where went after that but I did know that I had spooked him twice in short order.

I looped around to another flat on top of the hill and eased along until I saw a group of does. One of them saw me but I had the morning sun to my advantage and I stood motionless until she started to feed again. I could hear brush cracking behind the group of does and hoped it was more deer. As the does fed away I saw movement through the trees and identified the deer as three bucks looking through my binocs. One was a small 3x3 and the other a fork horn but a third buck raised his head up and his antlers caught my attention. His right antler only had 3 points but they all came out near the same spot like a trident with a palmated beam. His left antler had 4 points on the main beam with decent height. His spread was narrow for a mule deer but I decided to take him as he was the second best buck I had seen.

The shot wasn't long at all, maybe 80 yards offhand. At the shot the buck took off running in a circle. I could tell he was hit but wasn't sure of a fatal shot so when he stopped I shot him again. Down he went.

Luckily I was only about 300 yards from a jeep trail so I drug the deer over to the trail and walked the half mile back to the truck. I drove the truck over to the deer and butchered him right there and put the meat straight into the cooler. Not the biggest buck in Colorado but my best mule deer and first one with a rifle. The shot wasn't a long one either but I was prepared for a long shot should the need have arisen. 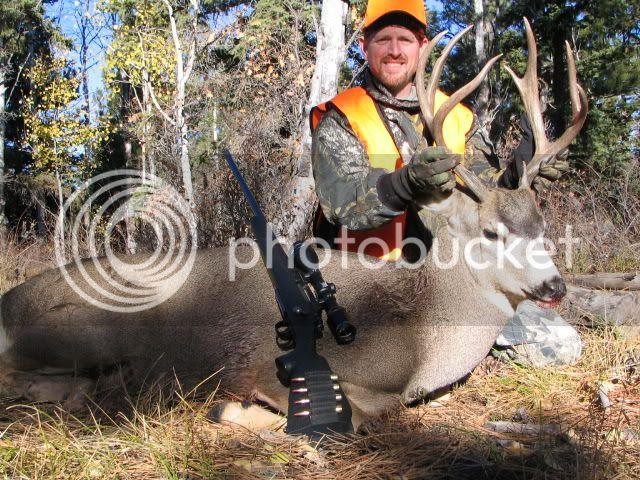 Nice deer and good story! I have hunted 62 a few times. Where were you when you got the buck? I mostly hunted the Spring Creek area, up and down a few miles. Where did you camp? Looks like like no snow where you were.
C

thanks for sharing,congratulations well done.
K

Nice buck, it's good to have the ability to take game at longer ranges, but you definitely don't turn down closer shots.

p.s interesting that your and mine usernames both end in 3006 but we both use 7mm mag!
H

Congratulations!!!
Great buck and a very nice story, thanks for posting.
I like the height of its beams.
S

liltank,
I used the 150 gr BT. With my handload, it matches the ballistic plex reticle in my scope to a "t" and is a good suprisingly tough bullet.

long450,
I camped along the Delta-Nucla road. I didn't see any snow anywhere, the daytime temps were in the 60's. It was colder back home in Missouri! I had plenty of warm clothes and tire chains, which turned out to be dead weight but other years they definitely haven't!
B

Sambo3006,
Thanks for the story and nice buck my dream is a long shot like some of the guys have taken on this site (but) I'll take a close shot and be just as proud anyday. What part of colorado did you hunt the reason I ask is because my grandfather told my dad that he wants us to take him out their next year he is 70 years old and we would love to see him get a shot on any legal size buck . We have four wheelers to eas up on his walking .

Great story Sambo. Thanks for sharing.
4

I am LH too, maybe we otto hunt together next fall. I too frequently hunt alone.
S

Silvertip,
Put up another post, man. Your post count is on an evil number!
I have been hunting with friends for about the last ten years but it just worked out that none of them were going the same time as me this year. What is your primary LH LRH rifle?
Share:
Reddit Pinterest Tumblr WhatsApp Email Share Link