Has anyone tried the Berger 150 vld in a 270 wsm yet? If so, could you share your thoughts and experiences with this combo? I mainly hunt whitetail and was thinking off tring the 150s around 700 yards. Thanks
M

I shoot a 270 WSM but I dont shoot bergers. I have an opinion though if you are interested. I live in wyoming and the people who made the Berger bullet popular the -best of the west live about an hour from me. My cousin and her boyfriend work there they like the berger because of it high ballistic coefficient and it is a highly accurate bullet, However the berger is designed to go in a few inches and turn to shrapnal. I dont see how that wan lead to consistent long range clean kills. If you can hit every animal perfectly behind the front shoulder then yeah it will probably work but what about when you have a monster elk standing there at any range and your only shot is a shoulder shot or a running shot in the hip to put it down? I know you hunt mainly whitetail but they can be tough too its just an example. I dont think its gonna do the job like a bullet that retains its weight and can do some bone crushing and penetrating. I shoot an accubond in my 270 WSM it has a great BC is very accurate and retains weight well. Not saying thats the best bullet but I like it. If you are shooting long range then obviously you have some sort of bullet drop compensating scope so comprimising the killing ability of your bullet because it flies better doesnt make sence to me. I am not trying to discredit berger they make bullets well, but your scope will compensate the drop of a premium huting bullet just as well as it will a berger. Partitions, accubonds, tripple shocks, all great bullets for putting down game.

Thanks Mike, I only use Barnes XLC 130s up to around 330 yards with excellent results now. I have just made a place to shoot deer at 660 yards and just haven't tried the Barnes in anything to see how they would open up at that distance. I was thinking that maybe the Berger vlds would be going slow enough at that distance to open up and penetrate with an exit hole. I know the velocity is getting pretty slow for a Barnes to open up well at 700 yards. I know for a fact under 400 yards I would never think of using anything but a Barnes! As far as the Accubond, I have not used them a lot. They are too close to the Ballistic tip, which i have had very inconsitant results from. Some BTs work great and some wouldn't. I know the Accubond is a different bullet but....
S

I've been shooting the 140 Berger, the 140 Accubond and the 110 TTSX. I have only taken game with the Berger and Accubond and I haven't taken anything over 400yrds so not real long range.
The 140 Accubond does a good job on deer, very accurate but a shot behind the shoulder will likely result a running but very dead deer. It does tend to blood shot a little more than I like, it will hold together very well through bone and is not the piece of junk the Ballistic tip is, it doen't open up as much as I'd like with a behind the shoulder shot.
We shot alot of Bergers this year and the 140 Berger in the 270WSM was awsome. It will clean a deer or elks clock. It reamed the cow elk, went in through the meat behind the shoulder and just started opening, punched through a rib then augered a hole the size of your fists through the heart and lungs, nearly zero blood shot.
I was apprehencive about the Berger so I loaded Accubonds as well but after this year I will only load the Berger. The Berger does not function like the Barnes but that has no bearing on weather it will kill or not, on the .277 Berger the worst I had was it going in and blowing the chest cavity to jello and farther out it did a slower gernade both in the center of the chest.
There BC of the Berger for long range is not about compensating for drop it is about windage and bullet speed, comparing a 140 TSX and the 140 Berger at 800yrds the TSX has 17.3 MOA of drop and 7.2 windage and it going 1545fps now the Berger has 14.8 drop, 5.3 windage and is still going 1822fps. The Berger has more leway for being of on a wind call and it is still going fast enough to fully function. The Accubond is very close to the Berger during flight but I don't think it will function at the lower velocities that the Berger will.
Load some and shoot a deer and see if you like how they work you may like them you may not. IMHO for what it's worth
Last edited: Jan 2, 2010
M

Hey, this is the kind of info i was looking for. What Velocity are ya'll shooting the Berger 140s at? I may have to try the 140s, I have an 11 twist and may not shoot the 150s(10 twist recommended). Thanks
B

Are you guys crimping the 140 Bergers? I have just gotten a box to start loading. I have not crimped for other rifles I have loaded, but I am concerned about these banging around in the magazine of my Savage 12 and being pushed back while cycling. Any comments or experience?

I'm also curious about this topic. I have a Sako A7 in 270WSM (they're 1 in 10" twist) and it seems to really like the 140 AccuBonds. I haven’t shot 140 Bergers though it yet, but I plan to work up a load. The advertised BC of the 140 AccuBonds is .496 and the 140 Berger Hunting VLD are advertised at .487 BC. It seems as though the 140 AccuBonds should shoot well at long distances, but I'm worried about the bullets performs at those lower velocities.

Does anyone have any experience with 140 AccuBonds at long range or lower velocities? How well do they open up below 2,000 or 1,800 fps?

BROWN TROUT said:
Are you guys crimping the 140 Bergers? I have just gotten a box to start loading. I have not crimped for other rifles I have loaded, but I am concerned about these banging around in the magazine of my Savage 12 and being pushed back while cycling. Any comments or experience?

I'm running them out of a Model 12 also, I found .015 of the lands to be the sweet spot. No crimping. Also try the slower powders, Retumbo, H1000, Magpro are real good.

I recovered a Accubond out of the dirt after shooting through a buck at 345yrds and it did not hit anything real hard as it was a high lung shot and it hit him around 2500fps. I was not super happy with the performance as it didn't open up real good, an elk would open them better. I would shoot the Berger at all ranges!
If I was shooting something with a 1-10 twist I would try the 169.5 Wildcats when they come available, you can run them around 2900fps, awesome ballistics!
Here's a pic of the bullet, the petals that are sheared of were where it hit a rock. 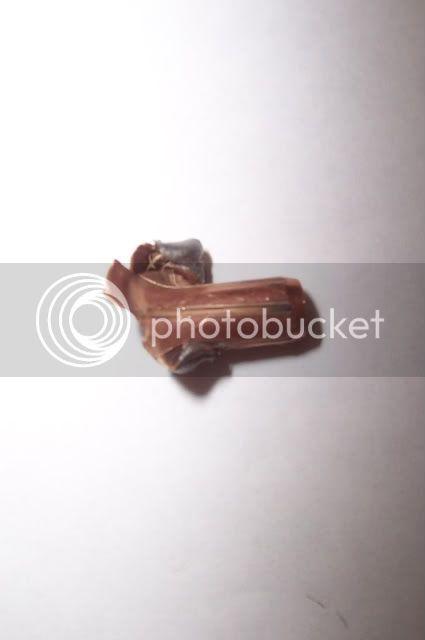 I have taken 2 Texas boars with the 140 Accubond and have been very pleased, but the distance was less than 100 yards on both. The largest was 290lb and the bullet entered the front of one shoulder, shattered the ball and socket, mutilated the lungs and heart, then plowed through the rear of the other shoulder, through the ribs and lodged in the grissle plate on the opposite side hide.

I am just starting to load for this rifle and am starting with H4831SC and RL19. I have not been able to find MagPro or Retumbo locally. What primer are you using with these?

I use Fed 215's, CCI200's and BR2's did well also but I didn't have many BR2's and the CCI200's would through an occational flyer. I actually loaded all the primer combos I could and shot them on one board side by side and the Fed 215 was the clear winner.
I think the Accubond is awsome, but there performance on the game I shot showed that one thinner animals with no bone hits they may be a little slow to open, thicker animals like elk or bear they are totally awsome, I have yet to recover them out of an elk but they blow through the heaviest of bone so far.
C

im from New Zealand and i use the 140grain hornady sst (which has a better B.C than the 140 Berger vld) with 70 grains of adi 2217 powder (dont know if you can get this in the U.S. but there are equivalents) this gives me 3200fps and very good groups i have shot red deer (one shot kills)with this round out to 400meters and beleve will kill out past 500 easily gun)
Share:
Reddit Pinterest Tumblr WhatsApp Email Share Link