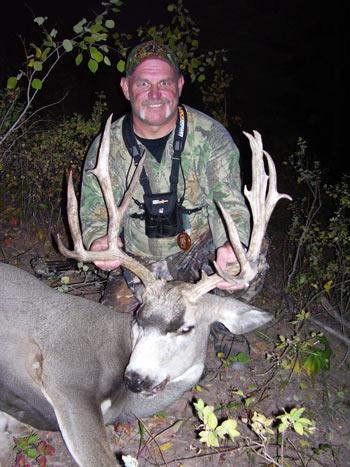 At the start of the 2011 season, my main hunting goal for the year was to let my 15 year old shoot his first elk. He has killed two antelope and two mule deer bucks, all with a rifle, but he has wanted to take an animal with his bow. The problem that you face with a youngster wanting to hunt is getting out them of school to do so. Being a high school teacher and having a mother who is an elementary school teacher, and with him being in high school, it makes it that much harder for me to pull him out, but we managed to pull it off. I am going to start off with the BUCK part of the story, and then you can hear the rest of his BULL story later.

I wasn't able to make it out on the opening day because the first of September fell on a Thursday, and also my son was involved in a fall sport. On Friday after school got out, my wife went out with me to our first day of hunting. We arrived in the area where we had planned to hunt. As we got to the canyon, we were already hearing bulls testing their bugling skills. We rode up the west side of the ridge on horseback so that we would be able to get above them. We rode to a certain little grove of trees where we would tie off the horses and go the last couple of hundred yards on foot.

As we were hustling up the ridge, my wife right on my heels, the sounds of bugling bulls were heard all around us. As we got a little closer to this sage outlook over the canyon, one bull started to sound like he was a little interested in what we had to offer and was starting to move in our direction. We moved to a little grove of trees farther up the ridge and cut our distance in half. My wife sat down in the grove of trees and continued to cow call to try to lure this bull in. The bull sounded like he was going to try to drop below us to catch our wind. I dropped off from our location thinking that I would cut him off. As soon as I did, he changed his direction and went straight towards my wife and I was caught in the wrong spot. I could now see him as he disappeared and reappeared through the trees as he excitedly approached my wife while feverishly bugling and going through his pre-rut antics. My wife, who was weaponless, sat in awe and amazement over the spectacle. For me, there was no way to catch him or cut him off before he got there. My wife said that he came to within 20 yards, close enough that she could hear him breathing and see him urinating all over himself, not to mention the blood curdling bugling that he blew in her face. She said that it was an awesome experience being that close to a bugling bull and being able to see the fire in his eyes.

As I was contemplating what to do, I thought that if the bull spooked, he would return to the safety of where he had just come from, but he never spooked, he just got bored because he wasn't able to find his cow, so he just kept going the same direction that he was going. While I was waiting for that bull to return, I heard a branch break behind me and turned to see a set of antlers coming straight for me. It was close to dark, almost out of shooting light. I could tell that this was a mature bull. I didn't have time to range him as he turned broadside and stopped. From where I stood, I couldn't see any obstructions between us. I guessed the yardage to be 45 yards. I drew my Hoyt back, settled the pins behind the shoulder, and released my Easton ACC arrow. The shot looked good and then I heard the un-mistakable sound of the arrow bouncing through tree branches. I was unsure if the arrow made it to the elk. I immediately went to where the elk was standing to see if I could locate the arrow, blood or anything to tell me whether the shot was good. My fears came true, as I couldn't locate anything. No blood, arrow or bull. As it was dark by now, we were looking with the aid of our headlamps. Since we weren't able to locate anything, we felt it best to come back in the morning and take a look in the daylight.

The next morning found my son and I right back in the same spot before daylight, listening for bugles. We went directly to the spot that I shot and began looking as soon as it was light enough to see. We looked around for about an hour, covering as much area as we could to try to locate the elk, but to no avail. We abandoned our search to work a bugling bull in the next canyon over. After catching our wind, the bull quietly exited the canyon not to be heard from again that morning.

A couple of days later we came back into the same area to hunt one evening, with my good luck charm, my wife. As we were getting close to the same area, we came upon a couple of people carrying out a quarter of an elk. As we were talking to them, two guys emerged from the trees with the antlers and another quarter. The bull on his back looked real similar to the one that I had missed earlier in this story. It appeared to be about a 330 bull. After leaving this foursome, we were a little distraught, one knowing that bull had been taken that morning, and two, they had spent all day in this canyon, cleaning and packing this bull out making all kinds of noise. I felt that they probably spooked everything out of the area for a few days, since it wasn't a big area. I was wrong.
Next page: Wyoming Buck 'N Bull >