Article Reviews (5) Gallery Discussion
Leave a rating
A quick note about the title: The General Spike Elk Hunt in Utah is often described as Unicorn Hunting. Also, our 7mm rifles were called “squirrel rifles” on Instagram during rock chuck season and we enjoyed the nickname enough to keep it going through the fall big game seasons. Now to the story…

The text came through on the evening before the opener of the Utah Spike Elk hunt: Josh had found a big herd of elk and put them to bed in an area we could hunt. Early the next morning I stepped out of the warm truck and into the cold darkness with hopes of getting into the herd Josh had seen the night before. It was still a few hours before sunup, and I was meeting Josh and Tyson to get the horses ready for the day’s activities. Tyson was already working on the animals but informed us that he had an ulcer flare up in his eye during the night and he wouldn’t be able to accompany us to look for the mythical Utah Unicorn. It put a real damper on my mood and I hoped it wouldn’t be a bad omen for the rest of the day, but 30 minutes later the horses were loaded in the trailer and Josh and I were headed to the trail head.

Once at the parking lot, we gave the saddles their final cinch, loaded the rifles into the scabbards and hopped on the horses. The amazing beasts hauled us straight up the steep trail and hardly paused as they raced against the sunrise. The pleasing aroma of warm horses filled the air as we arrived at the spot where we would be tying them up for the morning. With our fresh legs, the remaining climb to the top of the hill was made in short order and we set up to glass for some unicorns. It didn’t take long to hear a large animal walking in the stillness, and we scanned the hillside intently until the unmistakable brown hide appeared through the trees. A lone bull walked out of the trees a mere 200 yards away. Another hour of glassing yielded a few does and another lone bull with a neat drop tine, but the main herd had vanished overnight.

With nothing close by, we turned our optics across the large canyon behind us and immediately found a group of elk over a mile away. The problem? Getting to them would require dropping all the way to the bottom of the canyon and then climbing another 1500 vertical feet. We continued to watch them as two small herds emerged and then fed back into the timber to escape the sunny rays appearing on the hillside. We studied the terrain and planned out how we would get to them for an afternoon ambush. The plan would require that we hike in on foot, so we headed off the mountain and returned the horses to their corral. Since we had the luxury of being in town, we also stopped by A&W for a hot meal before we headed back up the mountain. 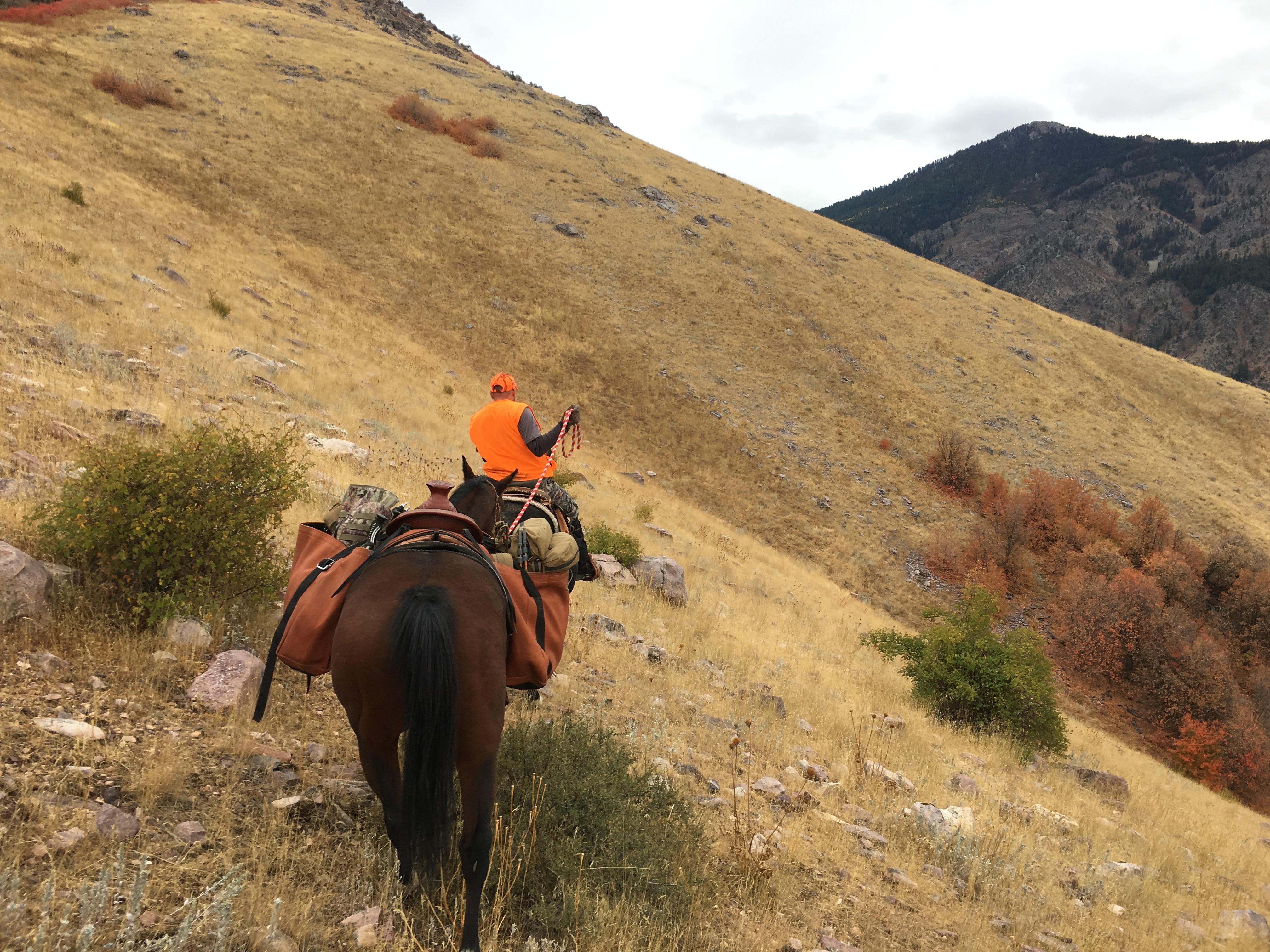 Heading back to the truck

4 o’clock found us back in the mountains and checking our packs for all our necessary gear. We bid the truck adieu and began to bushwalk our way through the thick maples on the steep hillside. After a while we broke through onto a long open face and continued to rapidly gain elevation with each arduous step. We finally arrived at the predetermined ambush point and set up for the evening glassing session.

The two herds of elk we had seen earlier in the day had bedded at different elevation levels and Josh and I both agreed we would only take an elk from the lower group to avoid any more elevation gain on our legs. However, it didn’t take long before the group near the top of the mountain began to feed out from their beds in the pine trees. Even though we had agreed to ignore them, both our spotters focused in on the animals and suddenly a unicorn was identified! A quick check with the rangefinder showed he was a little over 1100 yards way and completely clueless to our presence.

“It’s too bad that spike is in the wrong group of elk, he just isn’t worth the effort” I said. Josh began to egg me on and reminded me that I had practiced all year to be ready for a shot opportunity just like this. We debated back and forth for a few minutes on whether it would be worth the hike up to retrieve the animal. Josh finally got sick of my excuses and firmly informed me that I could shoot the elk, or he was going to. That was the final motivation I needed, and we began to set up for the shot.

Josh and I have spent countless hours shooting and hunting varmints with one another and both of us knew our jobs to get the shot sequence rolling. Since I would be the shooter, I went to work on finding the perfect position to get prone and still be comfortable with the 20° uphill shot and Josh began to get the spotter and camera set up. Once I had got in a comfortable position, I grabbed the shooting solution for the elk with some Zeiss Victory RF binos and confirmed it with my Sig2400 ABS. Josh gave me the wind call and I dialed in the necessary corrections into my Kahles K624i. As I settled in behind the rifle Josh whispered to me that another spike had fed out a little bit closer and was presenting a better shot. I found the animal in my scope and pulled another shooting solution from the binos and the Kilo; they both displayed 965 yards with a 19.25 MOA correction. I settled in behind the rifle and decided to change my wind call from 0.5 to 1.0 MOA in case the wind over the ridgeline was stronger than what I could feel, or see, at my position.

“On him?” I asked. “Yup waiting for you” Josh confirmed. I applied a few more ounces to the TriggerTech Diamond and let the 7 SAUM roar. The 180 grain ELDM rocketed out the end of the barrel at a velocity of 2920 fps and arced almost 200” above sightline before beginning its deadly decent like a heat seeking missile. 1.210 seconds after ignition, the bullet slammed into the neck and shoulder intersection and dumped all 1541 foot pounds of energy into the lungs and spine with the largest fragments of the bullet coming to rest just behind the shoulder on the offside hide. “Dead as ****, by the squirrel gun!” Josh proclaimed as the elk barrel rolled down the steep hillside until it stopped at its final resting place near the bottom of the draw.

Glancing back up the hill, the remaining elk were still standing around and were unsure why their young compadre had so quickly left their presence. Like a well oil machined, our roles reversed, and Josh flopped behind his rifle as I got the spotter and camera fixed on the original spike we had found. The Kilo2400 returned a range of 1125 yards and Josh dialed in the correction into his Sightron STac. “Is that the shot you want?” I asked as I puffed my wind indicator. “The wind is still the same” I let him know as I watched the small cloud float away. “Ready?” Josh asked. “Sure am” I replied.

The death dot of the Sightron reticle locked on to the elk’s upper shoulder and the silence was broken as his 7mm Rem Mag launched a 195 Grain Berger on its final journey. The Berger landed right on his aiming point and severed the spine right above the shoulder, instantly incapacitating the elk. “Second squirrel gun takes down a second spike” I smirked as we watched the elk slowly tumble down the mountain.

Now we really had some cause for celebration! In under 3 minutes we had just shot 2 elk with two well executed first round impacts at a combined distance of 2090 yards! It was all smiles and laughs as we reflected on the feat we had just accomplished and how well our practice from the previous year had paid off. The fun ended and the work now began as we ascended the hillside to break down the animals as darkness crept over the mountain. We finished the task under the light from our headlamps and hung most of the meat in some pine trees to cool in the crisp fall air. We packed out the backstraps and tender loins and arrived back at the truck well after midnight with tired legs and ambitions of some sleep. The next day we grabbed the horses and were able to get them most of the way to where we had hung the meat. The horses made the work easy and in just under an hour we were back at the truck and our elk seasons had come to a successful close.

With the end of every hunt one should reflect on lessons learned and add them to your memory bank for future reference. In years past, we had been tricked by a wind that was stronger across the canyon than what we could detect at our location and had hit an animal further back than we wanted. Armed with this information, I had dialed in a little extra wind into my shot. This extra correction was only about 5” worth and would give me a larger margin of error to keep the bullet in the vitals. If my original wind call was perfect, I’d hit the animal right at the neck/shoulder junction and if the wind was stronger than what I could see, the bullet should drift right back to my aim point. As it turned out, I had perfectly read the wind and the bullet landed a little bit forward of where I was aiming but was still a good shot location to bring the animal down.

Another lesson learned deal with shot angle. Due to the 20° uphill angle of the shot, Josh’s bullet impacted right where he was aiming on the high shoulder, but the bullet angled up into the vertebrae and didn’t allow a pass through into the far side of the animal. The elk was completely incapacitated with a broken back but did require a coup de grace to finish it off when we arrived at the animal. Looking at the photo taken thru the spotter the angle doesn’t seem that steep, but the angle shown in the figure lets you see just how important it can be to consider. 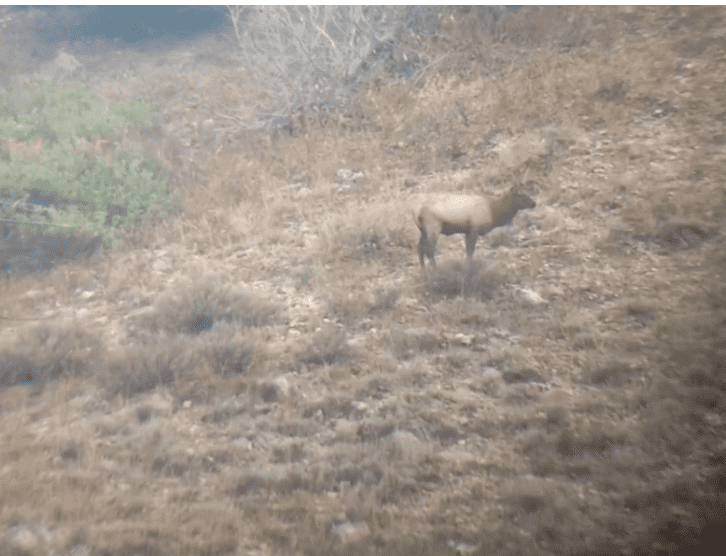 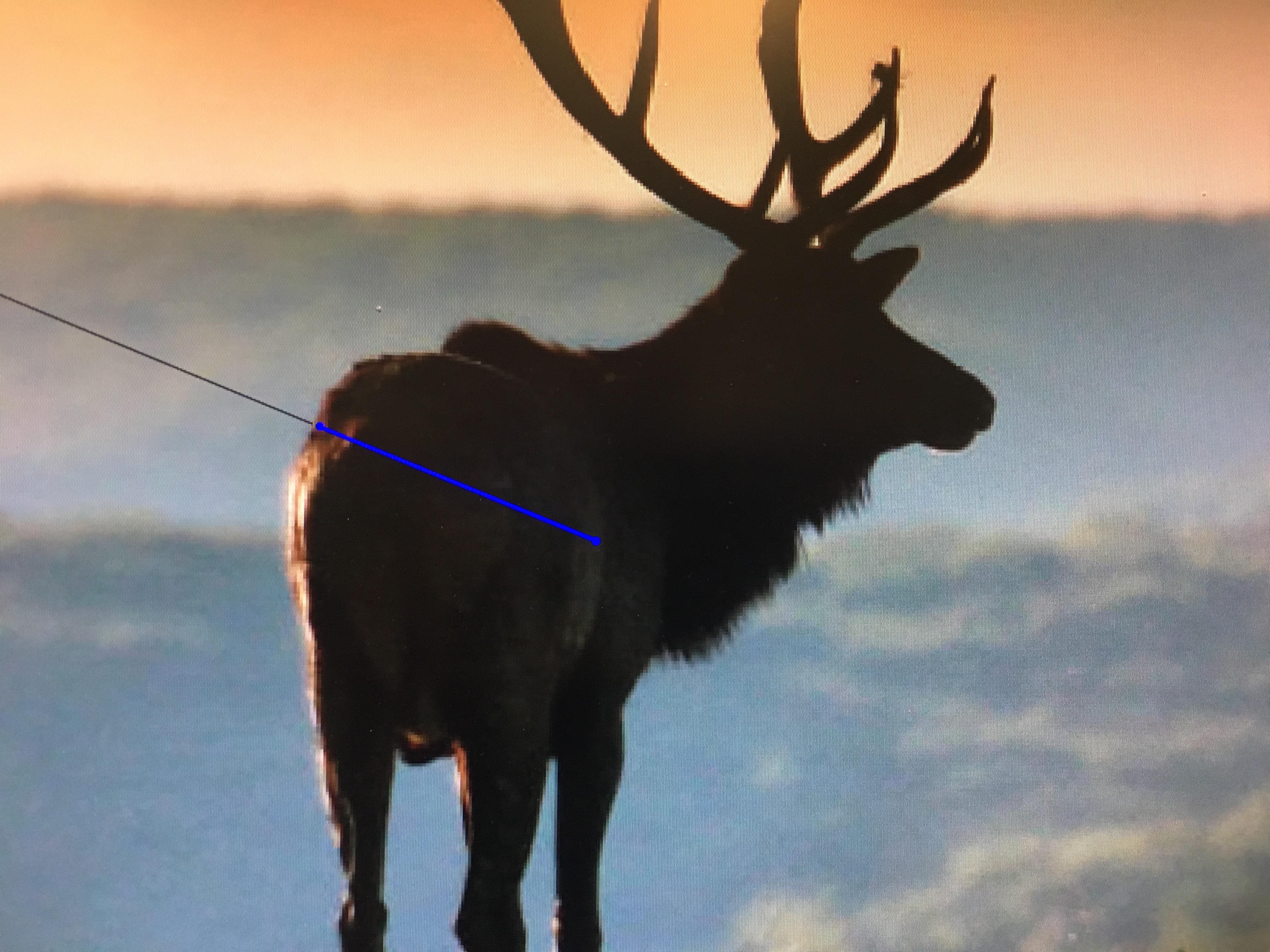 Sounds like a great trip and two well made shots. I don’t have a problem with a spine shot. It makes for less tracking I have made that shot on more than one occasion myself. Great right up as well.
Reactions: william baird
I enjoyed the article and the fact that the OP stated that they had practiced long and hard at long distances to get ready for just such a hunt. Don't understand the criticism from other who have rated the article but you always have at least one in every crowd. Can't make everyone happy! Congrats...
Reactions: william baird, Phillipw52 and Browninglover1
Well done. A good team up. Two hunters two shots two elk! Sounds like you had alot of fun. What Im actually surprised at is how well you placed the shots. Well done!
Reactions: william baird, Phillipw52, Browninglover1 and 1 other person
Read more…