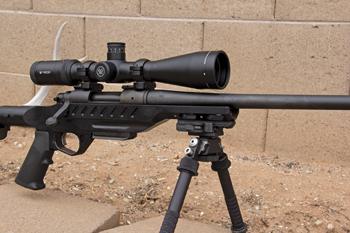 In the last 20 years, we’ve seen dramatic improvements in optics, laser rangefinders, factory ammunition, barrel production, triggers, and scope mounts. However, the bolt-action rifle hasn’t changed significantly in the last 100 years. Some of the finest custom rifles made today are built on Mauser actions that we actually machined in the first decade of the last century!


Even though there have been significant advances in rifle stock materials and production, the basic design of the hunting rifle stock hasn’t changed significantly until the introduction of the metal “chassis” rifle stock sometime in the last decade. I realize how vague that may sound, but after hours on the internet, I couldn’t begin to piece together the evolution of the chassis style stock. Whatever it may be, the Outdoorsmans has put its stamp on this history with the introduction of their own rifle chassis system designed specifically for hunting applications.

Why a Chassis System?
The chassis stock is simply an aluminum stock. While every serious shooter and gun writer will have his own opinion as to why they like the Outdoorsman Chassis System, I’m intrigued for two very important reasons.

Reason #1: Consistency. The Outdoorsmans Chassis System provides a perfectly stable platform for the rifle action and a completely free-floating barrel. It’s common knowledge that a wooden stock is susceptible to slight warping when it absorbs or releases moisture. This ever-so-slight change in shape changes the pressure applied to the action or the barrel, causing a shift in bullet impact or a decrease in accuracy.

Synthetic stocks were invented to minimize this effect and were a giant step forward, but precision rifle shooters were still not satisfied with the consistency of engagement between the action, recoil lug, and the stock. So, they machined pillars of solid aluminum with tolerances of .001 of an inch and bedded them into the stock in order to alleviate one more variable. Of course a solid aluminum chassis answers all of these problems by delivering the greatest probability of repeatable accuracy.

Reason #2: Adaptability. With the huge interest in AR-15 style rifles, there are literally hundreds of butt stocks and pistol grips being produced by aftermarket manufacturers. The Outdoorsmans Chassis System can be fitted with a number of these components, allowing the shooter to customize the rifle’s geometry without a trip to the gunsmith. With a collapsible stock like the Magpul MOE, you’ll have a .5-lb stock with a range of adjustment of more than 3” to the length of pull (LOP), all for just $39.95. Mission First Tactical offers the Battlelink Minimilist stock with the similar LOP adjustment and it weighs in under 6 oz!
Next page: Outdoorsmans Rifle Chassis System Review >