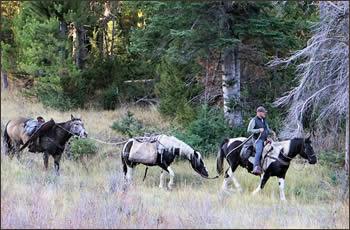 When I think back to this year's LRH Group Elk hunt with Non-Typical Outfitters in Western Wyoming, the first thing that comes to mind are the wonderful people my father, Len Backus, and I were fortunate to spend a week with. Of course, I also think about the adventure, beauty and excitement of hunting elk the way most guys dream about it, on horseback in the rugged Rocky Mountains, but I just can't stop thinking about the fantastic camaraderie.

Oh, and then there were the 6 bulls killed in the first 3 days!

Dad and I drove out to Wyoming from our home state of Wisconsin a total of about 22 hours of windshield time. We left very early Saturday morning and made it to Gillette Wyoming in time to spend a couple hours at Chuck McCoy of Mac's Gunworks shooting range verifying some things and shooting steel out to 1000 yards. One of our group hunters, Todd, met us there too. Todd is in his mid-thirties and works for a division of John Deer responsible for the GPS based systems that allow the tractors to navigate themselves. Todd was driving from North Dakota and this would be his first ever elk hunt so he was pumped. His wife is pregnant with their first child so Todd figured he better get this dream hunt in before his free time becomes much more scarce. It was great to meet him after emailing and talking on the phone a few times and he banged a lot of steel himself that evening. The shooting session ended with a stunning sunset over the Wyoming landscape - a great start to the trip!

One of two Elk Hunt Camps at NTO


We spent the night in a motel and were up early and heading to one of Non-Typical Outfitter's two elk camps. After pulling off the pavement, we drove on gravel and then dirt forest service roads for about an hour up into the mountains. One of the things we really like about Non-Typical hunts is that we can drive our vehicle right to camp. This allows us to bring as much gear as we want and not have to worry about going extra light. Camp is unusually comfortable for a wilderness setting and consists of canvas wall tents with wood floors and wood stoves for the hunters and guides along with a large canvas mess tent with a kitchen tent off the back where culinary-school-trained chef Robert always keeps the tent warm and inviting and serves outstanding meals. There is a very nice double outhouse and even a special trailer with a propane heated hot shower. The wall tents are very spacious for two hunters to share and the cots have very nice mattresses and pillows. In the evenings and mornings a generator is fired up and electric lights light up all the tents which is very handy. Camp is perched up high in the mountains with beautiful views all around. Even though we drive our vehicles there, and camp is especially comfortable, it definitely feels like the true mountain hunting experience that we all dream about.


We arrived at camp around 3:00 in the afternoon and met another of our group's hunters, Jim, who I'd spoken to on the phone several times. Jim had driven out from Iowa and is in his mid-fifties. Jim had archery hunted for elk over the years and called in some bulls that friends killed, but had never gotten a bull of his own. It had been some years since he'd been in the mountains hunting elk. Jim and his brothers own an excavation contracting business and a lifetime of physical labor has taken its toll on his body. He tells us he will be getting a hip replaced in the next year. Jim is one of those guys, like my dad, who knows the number of years his body will allow him to enjoy mountain hunting is numbered so he has decided to do it as much as he can now while he still can. Jim killed a nice mule deer buck on a previous LRH Group hunt in a different area.

We also met two of the previous week's hunters who were packing up and getting ready to head out. They have hunted 10 straight years with Non Typical Outfitters and have taken many fine bulls over the years. This year, Mark took a beautiful bull which, if I remember correctly, was his best to date. He told us that, because of the unusually warm weather, the hunting had been pretty hard with lower than normal bull sightings. We had been disappointed while monitoring the weather forecast leading up to our hunt knowing that it was going to be warm. In fact, it felt just like it had a month earlier on a DIY archery elk hunt I did in the Colorado high country and it was unusually warm then too. For it to still be that warm was disappointing.

The next members of our group to arrive were Frank, his son-in-law Alex and their employee and friend, John. Alex and John are in their thirties and Frank is in his Fifties. They own and run a medical equipment manufacturing business in Ohio and this would be the first elk hunt for Frank and John and second for Alex. The last hunter in our group was Justin from Kentucky. Justin is in his thirties and did two tours in Iraq and is now a train conductor. Justin brought his dad Johnny along to hang out in camp and enjoy the mountain experience. They spent a couple days vacationing in the area before arriving in camp and told us this would not only be Justin's first elk hunt, but his first time in the mountains and first time ever riding a horse!


The owner of Non-Typical Outfitters, Robb Wiley, took our group to a flat area where we checked our zeros at 100 yards and then moved us to the side of the mountain to give us some advice and training on shooting in the mountains. Robb has tons of personal experience shooting in the mountains and, of course, has guided thousands of hunters over the years. He pointed out that even excellent shooters like our group often are out of their element in the mountains and he has seen many fine hunters crumble under the pressure when a big bull or monster muley presents itself and the shot setup is unfamiliar. Robb trained us on how to use our packs as rear support and shooting sticks up front to shoot cross-canyon from a downhill position. Robb had steel targets set up at 400, 500 and 700 yards. I've been trained by Robb on these techniques in the past so I was able to help some of the guys get their positions set up just right. I just cannot stress enough how valuable this training is. None of our group had ever set up in this fashion before and several of the guys would use similar techniques to kill bulls in the days to come. This instruction only covered a tiny bit of the knowledge Robb has about shooting in uneven terrain. If you have a western hunt planned in your future or if you hunt in any kind of uneven terrain, mountains or not, consider taking one of the shooting classes Non-Typical Outfitters and LRH will be giving in the summer. By the way, I should mention that not every member of our group was interested in shooting beyond 3 to 4 hundred yards and that is absolutely fine. We are happy to invite shooters of all kinds on our group hunts and don't want anyone to feel like they have to shoot 1000 yards consistently to fit in.