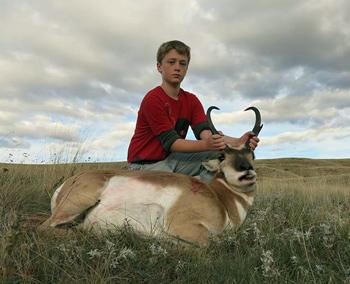 If there is one lesson I hope all my children will come to understand it is that determination is an absolute key factor to success. This point was brought home by this year’s antelope hunt. I applied for a unit this year with low odds of drawing in hopes of just attaining another preference point for Montana. I never expected to actually draw the tag. In this particular unit I knew antelope numbers were/are super low, so finding any antelope, let alone a buck, was going to be very difficult. Then add the fact that 90% of the land any antelope would be residing on would be private land, and permission is difficult, at best, to obtain. Well, you have your work cut out for you.

I spend a ton of time outdoors hunting coyotes and fishing in antelope country. For the past 3 months I could count all the antelope bucks I have seen on one hand and still have fingers left over. (That is NOT an exaggeration by the way.) There are just darn few around. About a month ago while out killing some problem raccoons for a friend of mine, I spotted a herd of 21 antelope on his ranch. There were 20 does and one buck. While not a really big buck, he's the best I've seen around here all summer.

I often hunt coyotes on my friends place, but I knew he ran the big game hunting super tight, and basically kept it just for family. However, I decided to take a chance and ask for permission for antelope. To my surprise he granted me permission and even said he'd keep an eye out to let me know if any were around. I tried to keep tabs on this little herd of antelope for the entire month prior to opening day. However they disappeared about a week before the hunt. Opening morning my youngest son and I went looking for them, and lo and behold we found them about 10 minutes into the hunt. Could it really be this easy? Only problem, they were on the neighbor’s property. So I drove over to their house and asked for permission to go after the antelope. They were kind enough to give me a green light. So it was game on!

My son and I watched the antelope through binoculars and figured out a route to close the distance. It was relatively difficult due to 21 pairs of eyes always on full alert for danger. However, we were able to get about 230 yards from them. I had forgotten my rangefinder so I wasn't positive of the distance. I did go back later and range it though. Anyway, I laid down, got my rifle steady on the bipod. I looked at the buck, full well realizing he would be one of the smaller bucks I've ever killed, but also realizing beggars can't be choosers this year. Besides, I had my youngest son by my side, and this was his first time hunting big game with me. I steadied the cross hairs on the antelope's closest shoulder as he was quartering towards me. I didn't have any buck fever and wasn't really all that excited. I squeezed the trigger and full well expected to see the buck drop. To my complete amazement, I missed. How or why, I have no idea. I've replayed the shot in my head a zillion times, and I don't know what I would do different. For whatever reason it just wasn't meant to be. I was super disappointed as I really had wanted my son to experience all that goes with successfully harvesting a big game animal. I spent the rest of the morning trying to close the distance and kill the buck. While we made many stalks, we were never able to close the distance to within rifle range again. They were super spooky.

In the middle of opening day I took a break to help a friend put up some firewood for the winter. After finishing splitting and stacking the wood, I asked if I could fish on his place. He has some great fishing. I’m glad I asked as it gave me a minute to try and get over missing that antelope earlier that morning. I only fished for a 1/2 hour as I really wanted to get back out in the field and look for that buck. For only fishing for such a short time I was very pleased with the results.

It’s hard to beat a chunky rainbow like this one: