For those of you who shoot this cartridge I'm looking for a good baseline.

This will be a deer hunting rifle.

I have one/had one, don't know if I still have it. I shoot the 264 STW mostly now instead which is about the same thing and I can give you loads for that if you are interested. They would be close enough for starters. These two require lots of slow burning powder to reach there potential and require a longer barrel than yours. Your rifle will not be able to outperform the 264 win mag by much because of this. I have clocked these two at over 60 fps gain per inch of barrel. You are going to achieve a lot of muzzle flash.

My 6.5-300 wby shot best with H-870 and H-570. The latter hasn't been made for about 30 years though. When I worked with it all the new stuff wasn't made yet. But the STW likes all the ones you mentioned and is about the same thing. I think with that short barrel you will need to go with a faster powder though for best performance.

I have a 264 Win mag with a 27 3/4" barrel and it loves Retumbo. 66.5 grs and the 130 Accubond averages 3350 fps and is a one hole shooter at 100 yards. I killed 4 deer with it this season and I really like the Accubond bullet. I recovered one from a buck that I shot at 111 yards in the front edge of the left shoulder as it slightly quarted toward me. The bullet destroyed the shoulder made soup of the vitals and was found in the right ham. The bullet was a text book mushroom with the lead core still in the jacket and the recovered weight was 71 grs. The other three deer were shot through the shoulders or in a shoulder and exit behind the offside shoulder. All were exit with golf ball size holes. All were bang flop shots from 98 to 275 yards. You have chosen a good bullet to try. With your barrel length I agree that you may want to go with a bit faster bruning powder than Retumbo. H-4831 would be a good one.
W

Thinking it was a build problem, my gunsmith pulled the barrel to confirm there was nothing wrong with the build which turned out to be the case. He also had the 6.5 - 300 WM reamer & this wildcat is a simple neck size which doesn't require any major fire forming, I figured I'd open it up to get some more speed out of it. Plus he cut me a great deal on the re - chamber job.

I owned a 264 WM before this one that would easily run 3200 FPS with 140's & a 74.5gr charge of H870. That was my goal with this new one, such was not the case. Sold the old 264 rifle because it had a Magna Port & I hated the noise. To chop the barrel down on that one would have left me around 23"'s to boot which I wasn't excited about. That Magna Ported barrel copper fouled something fierce but it did shoot good.

The chamber has been re-cut already, so ditching it is out of the question.

I wouldn't write it off to being a slow barrel just yet. With the data that has been supplied to me, I'll see how close I get to his speeds as I work up. I don't think my goose is cooked just yet. Stay tuned.
W

Here is how they stack up beside each other. 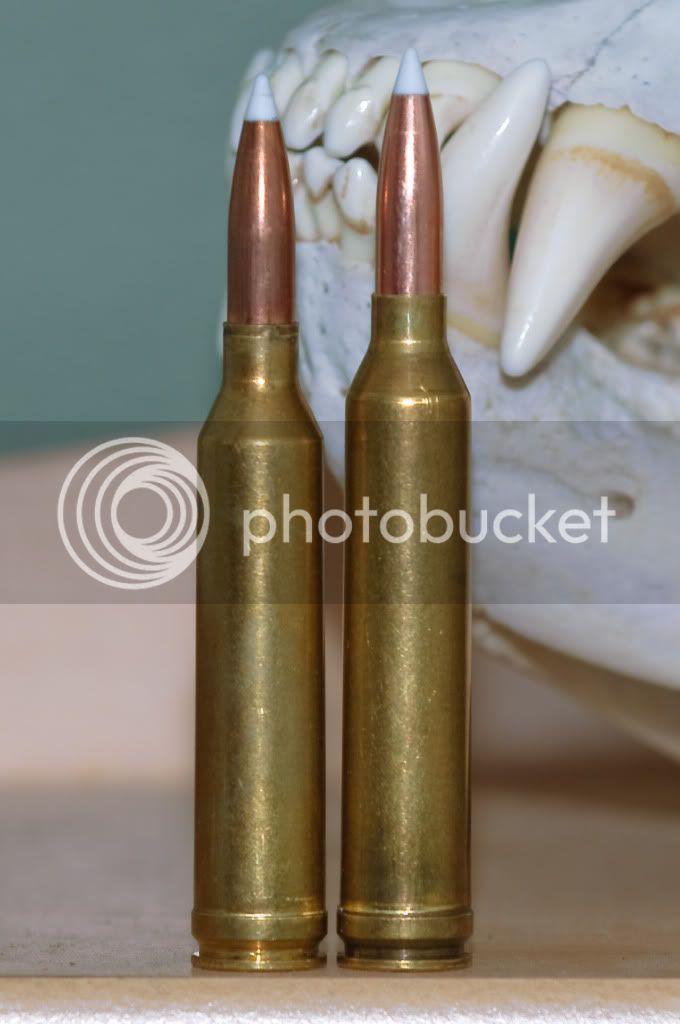 I hope she is good now. On his test fires he ran it up to 65gr IMR 4350 which is 9gr over max 264 WM data. Bolt lifted fine & primer was just starting to crater, so things look promising.
W

Well it was -31 this morning when I put it to paper. Today was our last day of Whitetail season, so I wanted to load it with something accurate & fast enough so I could just put it to paper & continue on my day hunting.

Last night I pondered where to load this thing at. I decided on 79gr H870. Why? I figured this would be enough powder to get me some speed & not get me in trouble. I also sized & loaded the two test rounds after the build to see if I was going to have a once fired issue again. Bot rounds fired & extracted no problem. Here is what it did. Keep in mind it was -31 & the shooter may have rushed a bit. Mind you I do like what I see

Top shell was the 2nd shot after a horizontal & vertical adjustment. The first shot hit the target beside this one (not shown). The next 2 were fired after another correction & the last three were after another adjustment. I am not sure why the rifle wandered a bit back to the left? There was no wind it was just bloody cold. After the 3 shot group I made one more correction to the right & fired at the other target (not shown) & it was dead center of the top dot. Good enough to go hunting. Man what a muzzle flash though

The chrony did not work in the AM, but I did set it up when the sun poked out for 1 cold bore shot. 15 feet from the muzzle gave me 3274 FPS Judging by the group I think I may be pretty close. Some tweaking when it is warmer out & we should be in the ballpark.
I did neck size one round when I got home and put a primer in the case. Primer pocket still very nice & tight. Not like some reloads I have done over the years The re-sized shell goes back in the chamber like nothing

Here is the load details

Nothing to shoot at today, not even a coyote Had one doe tag left, but in -31 weather it was going to have to be big to get my hands dirty.

So far all looks good.
W

Here are some updated photos of my 6.5mm-300 Win Mag. It now sports a 4.5x14x40mm 1" DPLX with CDS. The stock will be painted in a spiderweb paint finish in the new year. I may have the barreled action powder coated also. 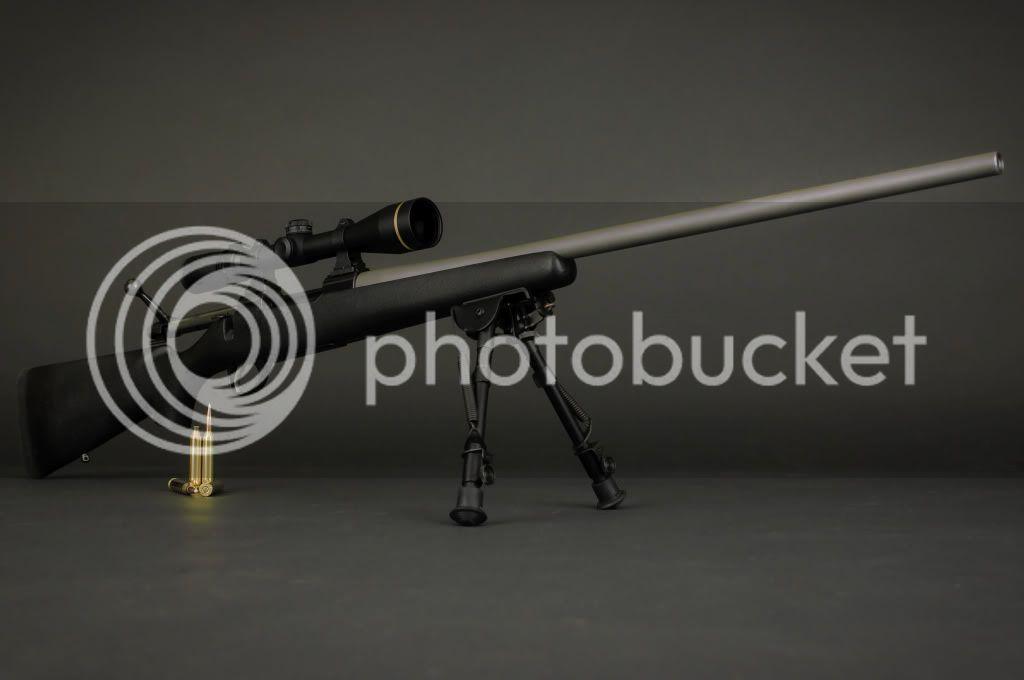