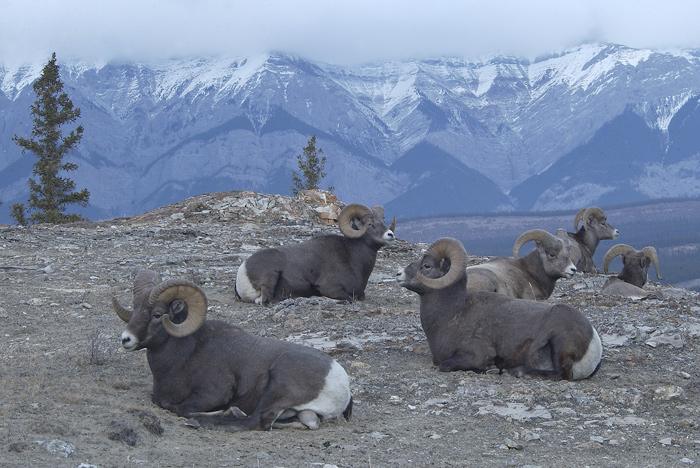 These big boys were enjoying their lofty view in Jasper National Park in Alberta, Canada several years ago. Interesting that even though they obviously were habituated to humans, they still picked a spot that gave them a very broad defensive view of the valley below.

I had, by now, spent a couple hours with these sheep following them along the side of the mountain. When they moved to the top of this ridge, I immediately knew I wanted an "environment" shot to really tell the story of just where and how they live.

When I first encounter my wildlife subject, I grab a few quick insurance shots. Then I really start to work the opportunity. I try different angles and compositions. I try different camera settings. I try to think ahead, asking myself how can I make this even better? What shot should I next try to set up? And yet, when I get back home and view my pictures, almost always I want to go back and do it better...or differently.

In this case, I had already gotten enough single ram shots, including frame-filling close-ups. So now I searched for the perfect spot to set up for my environment shot. I wanted the tree in the left corner to convey a sense of depth to the picture. I wanted a foreground, a middle and a background. I liked how the clouds had started to move in over the snow-covered peaks in the distance.

It was very late in the day and light was failing fast. To get the extreme depth of focus shown in this picture, I shot at a mere 1/3 second shutter speed with an F-stop of 16.

That is an absolutely stunning photo. From my personal prospective, it truly captures the essence of LRH.

It’s a beautiful shot and compositional wise I don’t believe it can be improved much if any. The tree on the left balances the photo nicely making it pleasant to the eye. Your right, there really is a well defined cense of depth by the way all the rams all placed.

In my humble opinion, the one thing that could have improved this photo would have been adding a warming filter lens to get a bit rid of the blue that was in the midst when the photo was taking. And how much would be a personal opinion. As for me when the white patch on their butts become “white” is just right!

Len's Nature Photo Of The Week

That is a really nice shot. Remember, man is not there only predator and they still have to stay alert for wolves and bears. Those bighorns are so much more massive than our Dall sheep up here in AK. Very impressive.

Unbelievable pic. Background and surroundings. Thanks for sharing.

Don,t have to drive they come down in my front yard

awesome pics from both of you, id love to have some in my yard!
F