I love the Mil-Dot, I have used quite a few different scopes brands. I know in David Longs book "public land mulies" he mentions that he uses Leupold Vari -X111 6.5-20x50 AO and sends them back to Leupold to have the mil-dot reticle put in it. I zero mine in at 200 and then find out where each dot is going to hit so I know which dot to use whether its for MOA or to compensate for wind drift. Where I live the desert south of me is all military ground, just have to pick a day thats not too hot and they are not out there playing army, their guns are just a tad bit bigger then mine. They have A-10's flying around and M1A1's running around out there. But come hunting season this year I expect to be dialed in to 1000 yards. Just bought a new Leica CRF1200 range finder and it works awesome, better then the bushnell 450 I had been using. So as long sightron doesn't try to start saving money and scrimp on the quality of their products I will use their scopes for the rest of my hunting life. I can't see paying $2,000 for a Swarovski, am sure they are good, I am willing to put my $800 sightron up against a Swarovski and I bet there is not a whole lot of difference.
N

freebird63 said:
Where I live the desert south of me is all military ground, just have to pick a day thats not too hot and they are not out there playing army, their guns are just a tad bit bigger then mine. They have A-10's flying around and M1A1's running around out there.
Click to expand...


Please tell me you aren't trespassing on GOV land and shooting on an impact area!!! I'm not judging you, just saying it's not your best alternative!

No not tresspassing, I guess its been kinda an open agreement, when they are out on manuvers they let you know and you stay out of that area, its all open to the public. They have signs posted that you are entering a military training area. Generally the first weekend of each month and then a period of a couple weeks during the summer when other troops are here training. All is safe.

Got it, the National Guard closes the area during drill weekend and annual training.

new shooter said:
Does sightron 111 have a zero stop ?
Click to expand...


No, it doesn't have a zero stop. This and things like the illuminated reticle are the advantages of the high end NF scopes. As always, you get what you pay for.

The Sightron offers a basic level of reliability in lieu of the extra features we would all like to have. That said, you can use the lack of a zero stop to your advantage, such as dialing down for head shooting a nice meat animal out to 200 yards, rather than the usual 3" high setting/ aim low business we are all so accustomed to.

By the way, we checked the sight picture at night recently. It was just after dark, hints of red still in the sky so not completely dark but the sun had been down for some time. Our target was a pile of offal at 300 yards at the bottom of a bush gully- baiting for pigs. At 24 power, the sight picture was, as can be expected, abysmal. The picture became clear at 6 power, better than our Leupolds, slightly less clear than my Leica BRF 10x42 binoculars (its hard to beat these anyway). One interesting factor is how strong the Sightron is at 6 power. Some scopes are marked '6' but the power seems less (see the first pics I put up of the S111 at 6x). Anyway, the 6 power gave us an adequate view for shooting and the crosshairs stood out nicely. No suitable pig was spotted so we tried again the next day. The irony of it was frustrasting. The owner of the rifle in these pics, wanted a nice young pig for spit roasting whole. All we saw was a fairly good sized boar!

Next evening was the same, so at 8:30pm, as the air temperaturs cooled and allowed for a stalk up the valley without an updraft, Derek made his way first down into the bottom of the valley, then up the valley floor into the gloom. Just on dark, a small, perfect for the job pig was spotted at 25-40 yards. The target was easily aquired at 6 power and promptly dropped with a head shot. So much for long range shooting, not that one discipline should ever be regarded as the optimum hunting method.

We caught up with derek thereafter and took a few pics. Here is a pic I sent him, the vital ingredients of a successful hunt. 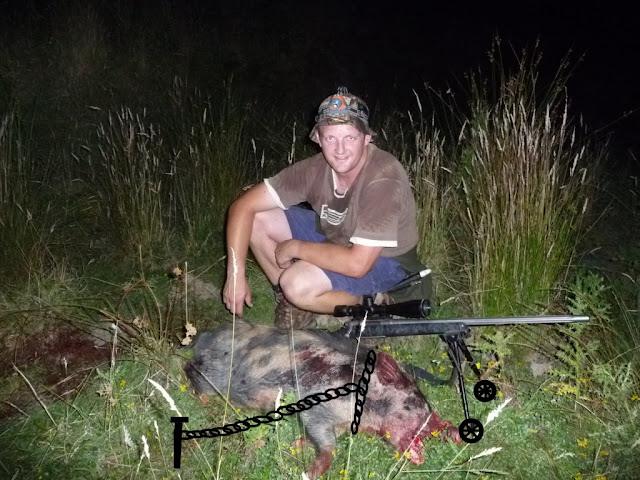 After all, what a friends for.

Nate, what are you guys using for Leupolds? I ask, because I would like to hear some feedback on the differences between the Sightron SIII and the Leupold Mark 4. Specifically the Mark 4 6.5x20x50.

The Loopies were just VX1 models. This is why I used the Leica as a high end comparison. We were also wondering about the MK4 model you are talkng about- the question certainly came up.
Share:
Reddit Pinterest Tumblr WhatsApp Email Share Link