I have been hunting in this area (gmu113) for 6 years and have never punched my deer tag there. It was the fourth day of the Eastern WA deer season, and the next day it was going to start raining, which means it will be fogged in on the mountain. I talked my older brother into coming with me the night before.

We were at the trail head at about 5:30am and started our long walk up the mountain. We had just made it to the first pile of rocks when I spotted a coyote above us standing on a rock about 125 yards away by the time I decided to shoot it was off the rock and looking at us i put my gun on my pull cats and touched off. He fell instantly, deciding we would find him later we kept moving around the mountain.

After seeing about eight mulie does moving up the mountain we had made it to the spot that I sit. While I was glassing the mountain, I looked down to the timber line (about 500yards) and saw what looked like a big bodied deer coming up the mountian. My older brother put his binoculars on him and said he has antlers just as he disappeared behind a thin string of trees that went vertically up the mountain in front of us. I ranged a small opening at 344 yards with my leica hoping he would walk through it.

I set my gun on my pack and waited; a doe came through the opening. This was a good sign. A moment later the buck came. I had to make sure he was legal (3 point min) he was legal and still moving. The trigger broke before I had the cross hairs where I wanted them to be. My .257 Wetherby barked, craping a 115 gr berger out at 3360 fps. I saw it roll him on his back, I lost sight of him as I chambered another round. My brother said he saw him scooting down the hill draging his back legs. We waited about 10 minuets and worked our way over to where we saw him last. He was about 50 yards down the hill stuck in a tree still alive. I put one in his neck to finish the job.

Here are some pix of my first mulie and a day me and my brother will not soon forget. We dident have a camra that day these are from the next day when we cut and packed it out. 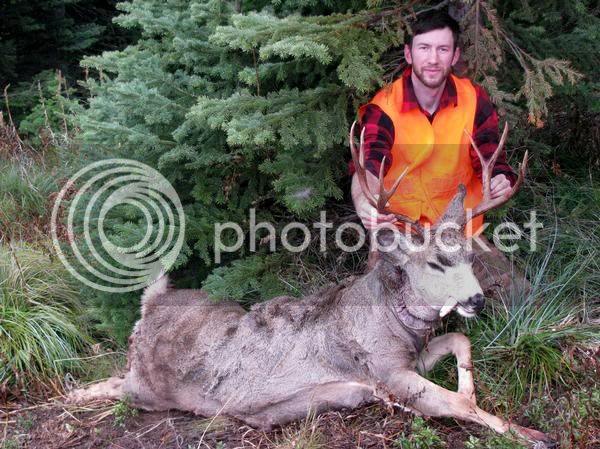 Geting ready to cut him up and pack him out. 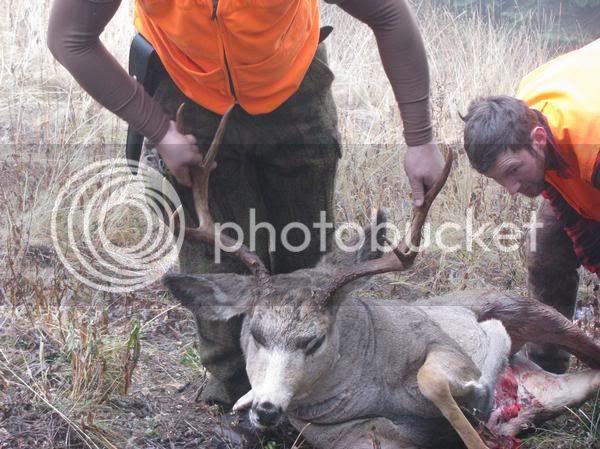 Packing him out my brother on the right and some of are frends. 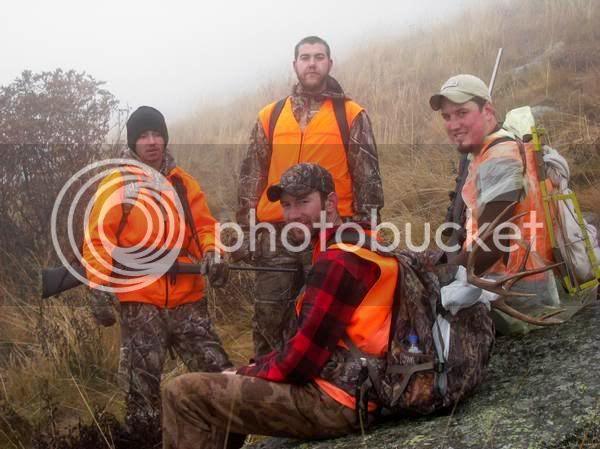 The mountian i hunt the green is where is shot from ruffley and red ruffley where thay were. 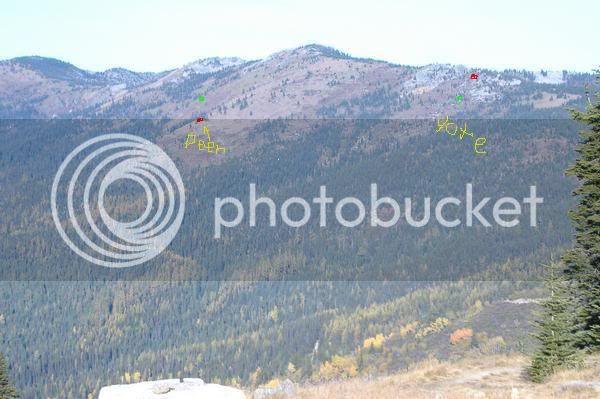 Dident get pix of the yote.

WTG thanks for sharing your hunt
N

guy m
just wonderd if you have checked the BC of those bullets and if so what you were geting.
T

Nice deer and a great hunt with your brother. Congrats.
M

Wow, very nice buck. Sounds like a great hunt for you guys.
You must log in or register to reply here.