has anyone had any experience with howa rifles.
I

there top of the line in my book.
D

I have 3 Weatherby Vanguards and they are Made by Howa. All are great shooters.
B

I have a .223 in a Howa it's a great shooting little rifle and was cheap too. Triggers pretty much suck unless you like a REALLY heavy pull. I put a Timney in mine and it made for a really inexpensive great shooting rifle.
E

Great rifles, great trigger too once it is tuned , my one broke like glass at 700grams. It was tuned by Roedale Precision. Overall I think the stainless version is worth the extra. Some have complained about thin blueing on the standard one. Stocks are as many other factory stocks not great, the laminated ones are OK when pillar bedded. The tupperware is throw away.

Typical 5 shot group out of my 22-250 sporter. Only trigger and crown done.
Sitting in a lightweight composite stock. Rifle was not even bedded.
edi 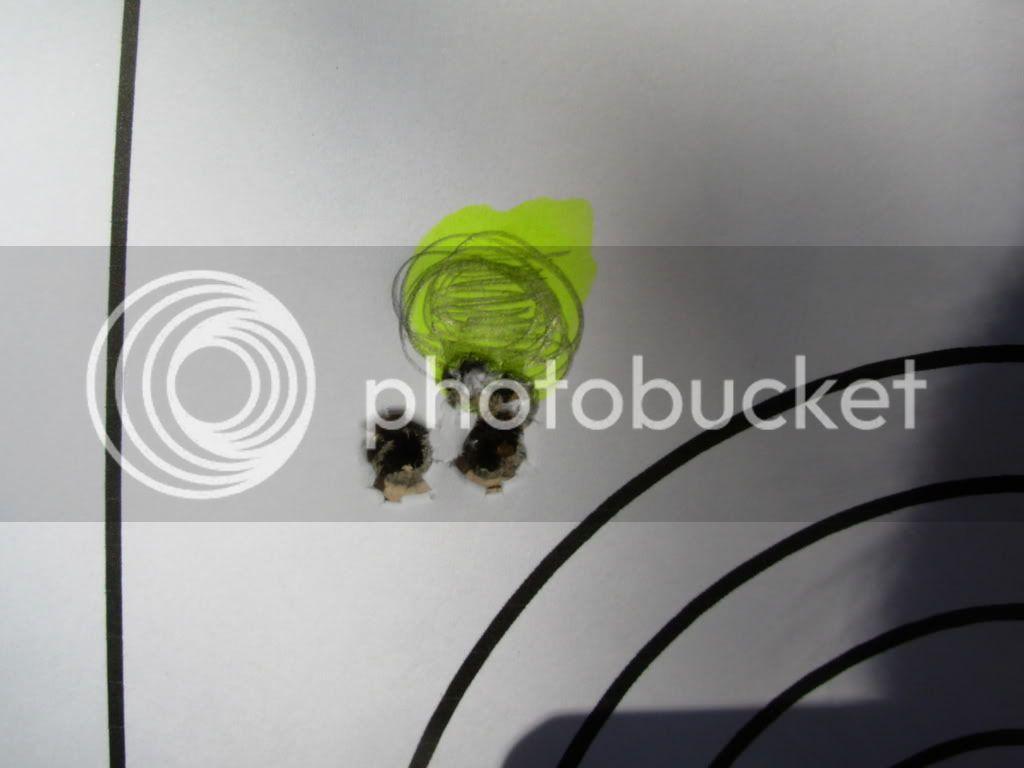 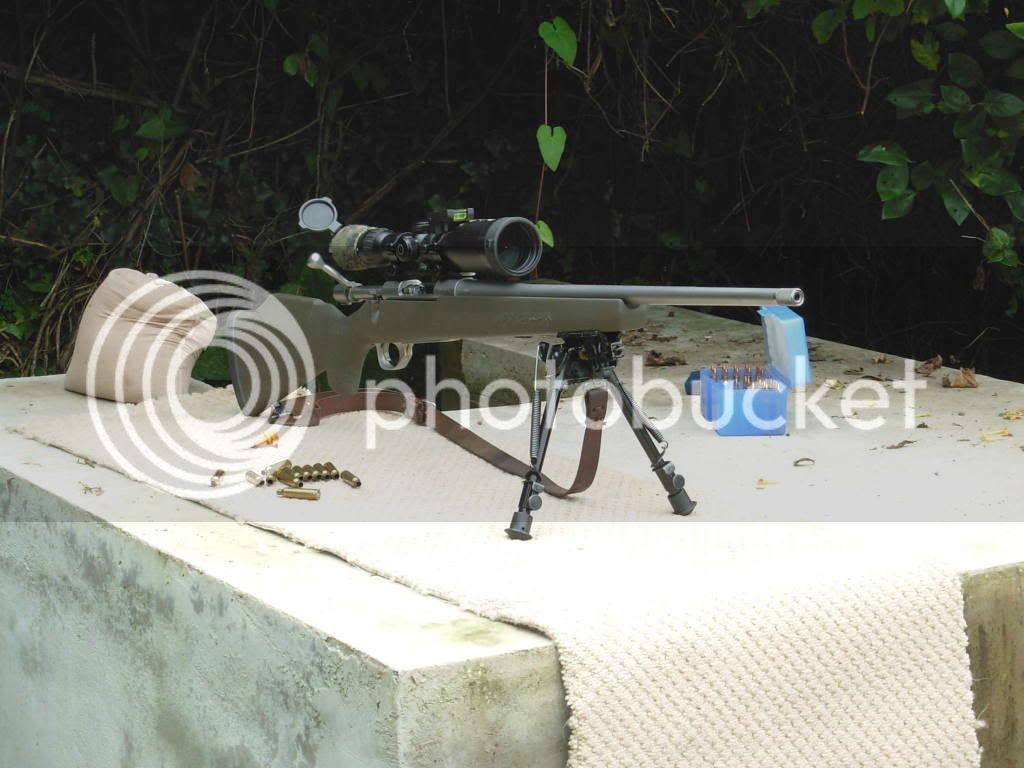 I just finished mounting a scope on a new Weatherby Vanguard Sub-MOA 300 WSM in stainless and I am heading to the range. I am extremely impressed with the rifle. Fit and finish was just about perfect. Trigger was right on for a hunting rifle, really nice. Rifle weight was right there were I wanted for a 300 WSM at about 7.5 pounds. The test target had a .500 inches three shot group using regular factory ammunition. I am on my way to the range as soon as the weather clears.

In the same order I purchased a new stainless Howa barreled action in 7mm WSM. The trigger has way too much creep. I am online now looking of for the adjustment procedures for the Howa trigger.
C

A few years back I bought my brother A Howa 1500 in 243. Its a great little walk around rifle. It groups at an inch but the trigger is whats holding it back. So far my brother has taken three Boone and Crocket Deer with it and he loves it. You guys that talked about trigger jobs and aftermarket triggers where are they? I would love to put one in my brothers rifle.
T

The Howa trigger is adjustable:

1. Make sure the weapon is unloaded and remove the barreled action from the stock.
2. There are three screws on the Howa trigger assembly, all three are
RTV'd. Remove the RTV from the front and back screws.
3. The front screw is the return spring adjustment (Pull weight): Back
this screw all the way out, then install to at MINIMUM 1.5 threads. This
is the lowest trigger pull setting that is recomended by Howa. It will
give you around 2.5 lbs. Re-RTV the screw.
4. The rear screw is for Sear engagement. Adjusting this screw in will
give you a finer engagement and less creep (there is NO creep in my
factory Howa trigger), adjusting it out will give you creep. RE-RTV the
screw.
5. Reinstall the barreled action into the stock, place a stap cap (or
expended shell) into the chamber, cock the weapon and smake the rifle butt
HARD a time or two to see if you have gone too light on the sear
engagement. If you don't have any 'slap fire', your good to go.
T

Every time I thought I had a Howa trigger juuusssst right... the safety wouldn't engage. The Timney is great and comes with a three position safety.

HI-SCORE GUNSMITHING will machine your stock Howa/Weatherby trigger to better than the Timney for about half the price but only do it with the entire barreled action. After the cost of shipping you're likely better off with the Timney.
T

I recommend that you take the rifle to a qualified gun smith and for $50 he will turn the Howa trigger into a jewel or you can try to adjust the trigger yourself, possible mess up the trigger and yourselgf or an inocent bystander and pay out dollars for the Timney trigger.

The following is information I copied off another web site.

Howa Trigger
Dear Shooter:
The way that Howa trigger works is it is factory set for sear engagement, based upon a dimension from the front of the trigger to the round pin of the safety; this gives a long, mushy pull I agree.
If you set your sear engagement where you want it (and safe) then just remove the trigger and you will be able to see where the safety pin hits on the front of the trigger! This keeps the trigger from going forward and firing the gun. Now, just stone that area down on the trigger where the round plunger blocks the forwad movement of the trigger SLOWLY, until the safety plunger will just go in and give NO movement to the trigger (of which the top part is the sear) and test several times! You might slightly radius the plunger where it travels in to ease it.
This is just the way I do the factory Howa trigger but I take no responsibility for the work unless I do it. Not that you cannot do it.
As you know, "the safety on your rifle is located between your ears and is adjusted by strking your temple area with a blunt object!"
Never trust a hammer/sear block safety! Mauser was the best because it withdrew the cocking peice from the trigger mechanism. If you are willing to be careful and test the weapon by closing the bolt smartly, banging the butt of the stock with the safety OFF, you'll be O.K.

tgh97531 said:
I recommend that you take the rifle to a qualified gun smith and for $50 he will turn the Howa trigger into a jewel or you can try to adjust the trigger yourself, possible mess up the trigger and yourselgf or an inocent bystander and pay out dollars for the Timney trigger.
Click to expand...

You're making an awful lot of assumptions.

As far as recommendations go, I recommend you continue to cut and paste your little tidbits of information and links from other sources and leave the conjecture out of it.

Enjoy your Vangard. I suggest you take it to a qualified gun smith so he can load it for you because you might shoot an innocent bystander.
S

i've had 3 vanguards, all excellent shooters. 2 had reaaaally crappy triggers, and i replaced them with Timneys. that was an easy install, just had some minor tweaking to get the new safety to fit. was recently at Wal-mart and saw a vanguard in .30-06 with the tan carbelite stock with black webbing for $349. had 'em get the box, and the 3-shot group measured .519 inches across, which makes for a pretty decent group when you back out .308. so i got that one too. oddly, this one has a perfect trigger- no need at all
for the Timney on this one.

the heck of it was, i wanted another tikka, but just couldn't give up the vanguard tack driver. the vanguard is a little heavier, but i'll deal with that later....

Thank you for the information everyone. I have a 15 yr old cousin who was messmorized at watching my savage 30-06 bust milk jugs at 600yds. Obviously no big deal really but he was hooked and wants an entry level rifle to start this great past-time. He saw a Howa axiom and thought it was a great looking rifle but I had never shot one so I came to see what the experts had to say!
You must log in or register to reply here.
Share:
Reddit Pinterest Tumblr WhatsApp Email Link