A week ago, my son, Erik had the time to work on filling his antelope tag. Gregg Richter was also able to spend the day with us. The antelope would not cooperate. What is usually an easy hunt turned more challenging. There was several times where we were crawling because of the terrain. Basically we made multiple stalks on this group that had two bucks in it. This year, I decided that it was time for Erik (15 years old) to begin to do more things himself. He was using my McRee aluminum stock rear grip XP-100. McGowen barrel with Holland's Radial brake and Barrel Attitudes fluting/rubber filled flutes. 6.5-284, using Berger 140 VLD's. Scope is a Leupold Mark 4 FFP 6.5-20 with Holland's ART Reticle. He had a shot at 425 yards. I told him the distance, and had him check the drop chart. For some reason, he had it in his mind it was 375 (realize that over the past couple of hours the distances had varied a lot). He put in the MOA for 375 instead of 425 yards. He doped the wind perfectly and at the shot I heard the meat report but the animal did not act fatally wounded, and covered 50 yards and stopped. We were both surprised that the buck didn't go down. I hurriedly glanced at the drop chart on the side of the stock and glanced at the turret and noticed that the scope didn't seem to have enough MOA in it for the last shot. I again looked at drop chart for 425 yds and asked him what he dialed for. He said, "375 yards." That is not the concern at the moment (this happened very quickly), and I told him the MOA for 475 yards and he dialed it quickly and gave him the wind dope. At the shot I again heard a meat report and he went down. Gregg was pretty sure he was down for the count, but I thought I could see his head up. There was a lot of sage, so it was hard to tell. Now, I make a mistake. In order to get there quicker, I grab the XP and Erik follows me. I zero the turrets on the way. IF, I had let Erik carry the gun he would have had an easy 150 yard shot when the buck managed to stand up-My bad!
Well, I don't know how the buck managed it, but he went down the draw and to the left. We regrouped and found him bedded, not wanting to move even though a whole herd vacated the area. Erik did the finishing touches @ 350 yards. Sometimes antelope act as if a slingshot will drop them and at other times they act like elk. I have seen the toughness of antelope this year, that has given me more respect for the hardiness of this animal. All in all, Erik and I learned some good lessons. Erik was really mentally down for awhile after he put in the wrong dope, but worked through it. For a 15 year old to do this showed me his mental toughness to focus on the shot regardless of what had gone wrong before-Many adults cannot do this well under pressure. I am very proud of him. Gregg was great to have along and was also a good encourager to Erik when he was down on himself-Thanks Gregg! Photo by Gregg Richter 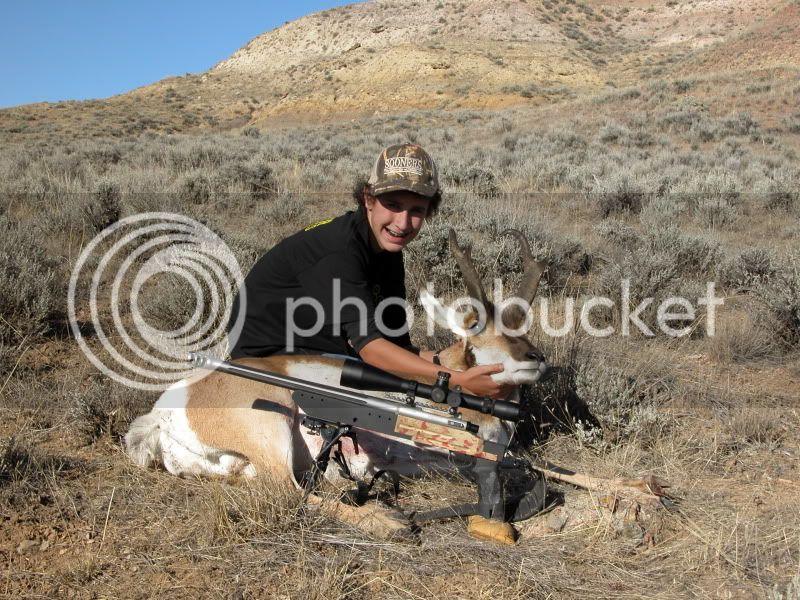 Congratulations Erik!!! Nice buck and it sure doesn't hurt that you had the best equipment and coach available.

Congrats Erik! That's a beautiful buck. First of many to come I'm sure. Thanks for posting Ernie.
H

Erik and Ernie,
Congratulations!!! Nice buck, and nice story, thanks for posting.
Where was the antelope hit the 3 times, could you figure it out?

First shot was low on the body and it got at least one of the legs, maybe both. The last shot was great placement and we had that tracked well. It is the second shot that was a little confusing. Best we can tell (We didn't gut the animal and we were in a hurry) is that the 2nd shot went through part of the same area the first one did and we are thinking got part of a lung or lungs. One thing is for sure is that shoulders were trashed. That is another reason why were shocked this buck kept going. He must have been "dead buck trotting" after the 475 yard shot because he was incapable of getting up when he took the bedded shot @ 350.
As you can tell, I am not sure.
H

Well done Erik, You overcame the frustration and made a great third shot. Sounds like you made a great impression on Greg as well.
I tell ya , that antelope hunting sure can become addictive, I am already counting the days till next year in WY, hope we get a chance to hunt with your dad again and hopefully you can join us next year.
again great job!!!!!!
nmhunter
Last edited: Oct 25, 2009

Congratulations Erik and Ernie, well done. Pretty soon he'll be spinning the turrets for you Ernie...