Don't become predictable , change your sounds , stand locations ect. . My dogs know what day and time the garbage truck comes to empty the dumpsters as it's the same every week . Do your best to not fall into that rut .

Do your stellar stands have anything in common?
D

If we take the time to think on our stands we will find some thing, or more then one thing , that the good stands have in common . They may be on higher ground , easy to get to without making much noise or being seen , over looking good coyote lay up spots , or habitat for pray , ect. . Over time we just get a feel for what looks to be a good spot from what has produced for us in the past so keeps notes , mental and written . geo4061 that is a nice looking piece of equipment in your picture .
D

I don't like to wear any shinny things when I'm hunting . My watch , glass's and I even have a beard to cover my face and keep it from being a stand out . You don't have to put together a gillie suit just blend in with your area . Here in the dry grass lands of the west carhartt brown duck clothing that has been washed and faded blends in well with the grass and most of the dirt . A sun shade for the objective of the scope or a cover that is made to keep the scope glint down helps . It depends on your budget how much you can buy and how much you can come up with by thinking about what you want as to your amount of concealment needed . If you weren't trained in the military about cover and concealment tactics then find some good reading on the subject of cover and concealment .

Just got through watching Carnivore. Gary reminded me that it was important to think about elevation when you are picking stands. Two of my stellar stands have elevation. Remember to take the high ground,

Take the high ground but make sure you do NOT sky light yourself.
D

It really doesn't matter what you are hunting sky lining your self isn't a good idea . move with a purpose think about where you want to end up for your stand , look over the area you will be moving through and pick a route before you begin to move toward it . As you move toward your destination you may need to change your course as you encounter obstacles that were un seen at first . Watch where you put your feet and what you need to move through to limit the amount of noise you make as you move . Make your movements slow and steady use the terrain features to your advantage , use low areas to move in and keep from sky lining your self , stay behind a hill or high ground as you move into your stand area . Cross ridge lines in low areas , saddles with some cover in them then set up on the back side of the ridge line lower down then the top of the ridge . Set up in front of bushes , rocks ect. but don't stand out like a lump from the side of them or have your head and shoulders above them . Watch for ants and other critters where you want to set up your stand , no body wants to be in the middle of a stand and be bitten , or stung by them . Might mess up your whole day if that happens . Relax and enjoy being where you are when you are there if you think you are in a hurry to get it done stay home for then un till you have the time to take your time , animals don't have a clock to punch they live life as it comes at them try to do the same when you are in their world . Listen to the birds and insects around you they will tell every thing around you that you are there as well as tell you that some thing else is near you . Let them return to their normal activities after you set up before you start to call . Above all else just relax you smell bad when you are tense or excited , have fun with it that's why most of you are out there to have the out of door experience not to make a living or to do predator control work . When you are at home or your job that you make your living at practice being aware of your surroundings , what am I going to bump into , Where do I want to put my feet , how high do I need to lift my feet to make the least amount of noise and not trip over some thing . It all becomes second nature to you and after awhile you just do it that way . Think about the young people in your life and how they are so clumsy when they are starting out learning to move around in their new world that is the way most of us start out in the world of hunting clumsy and awkward as we live in a different world most of the time .
T

something that I have adapted to doing for the last few years is using my ecaller to do the "stop" barks instead of using my mouth. My Lucky Duck has some really good aggressive barks on it that I use.
It seems to 1)work and 2)keeps the coyotes from looking at me as I'm often in pretty wide open country, and 3)the barks seem to really work well when I have multiples show up at the same time. I like the fact that the barks don't stop when I decide to shoot and often times the constant barks seem to confuse them.
I figure that a guy uses the ecall to bring the coyotes in, so why not use it to make them stop for the shot too.
R

TRnCO, Lay out a scenario that you have successfully called in 2 or 3 and killed them all. Be very specific on what you do as this is a detailed bunch and we are waiting with baited breath, as there is always someone that is smarter than me.................

So since getting my 1st suppressor 8 years ago, I have successfully killed 7 quads and a six pack on a single stand. Along that same time is when I shifted to nearly 100% ecall, and along the way have learned that coyote vocals are a very powerful tool, especially when we get into late season/breeding season.

So I'll give the details of one specific stand that I called in a quad, that all came in together, and killed them all, and never fired a shot at a moving coyote.

This particular stand is one over looking a large flat pasture with very little cover. I usually enter this stand in the dark hoping to get in without being detected. I do have a few soapweed to sit in giving me a little bit of cover to blend in with.

On this particular stand I started with a series female lone howls right at first light. I immediately had vocal group response about 1/2 mile out. It was probably a little too dark yet really, so instead of pushing the issue, I waited a few more minutes before doing anything else as I didn't want them to come before I could really see well. After several minutes went by I did another series of the same lone female howls and again immediately got a vocal response, but much closer now. I was then able to locate the group with my bino, and they were already coming my way, so I sat and watched as they were committed and coming, coming good.

As the group came racing in I hit my #1 preset, loud barks. The first coyote was coming so hard that it actually got on by me before stopping, BUT #2 and #3 slammed on the brakes at a mere 35 yards, so I center punched the first one that I found in the scope. At the shot, all 3 remaining started to run off, but with the loud barks still playing, none ran very far before checking up, and at that point I settled the cross hair and downed #2. At the shot the remaining two coyotes started to run off at which point I hit preset #2 which is a coyote fight. Shortly after starting the fight sound, the other two stopped for a moment and then came running back in, and then I hit preset #1, loud barks, and got them to check up again, and I dropped #3 of the bunch. And once again, the last remaining coyote started to run off, so I hit preset #2 again, and once again, the coyote stopped and then started to come back in, but checked up at just over 100 yards, so that's when I downed him.

In wide open country, even where the coyotes can see everything around them, it's easy to fool their minds into thinking that they can't see everything. They are hearing barks, or fights, for example, and it'll keep them engaged and coming back for more.
The coyote vocals that we have available to us are very powerful, especially when multiples are involved. If a guy hasn't started to use them, he really needs to, and learn their value. here's another quad that I killed just a couple of years ago.

This quad all didn't arrive together, but ended up getting them all killed. I actually used bird distress to get the first three rolling in together and then used my loud barks to stop them and after I got them stopped and started killing, then I switched to my preset fight sounds. I got the first 3 all killed, again, without shooting at a moving target, and when I switched back to prey distress, the 4th coyote showed up a few minutes later.
I guess the moral of the story is as much the fact that a guy can kill multiples without shooting at runners and with the use of coyote vocals. I see so many guys kill the first and then just go to shooting at the runners and if only they could learn a little patience, I think more guys would kill more multiples with more success by learning patience. 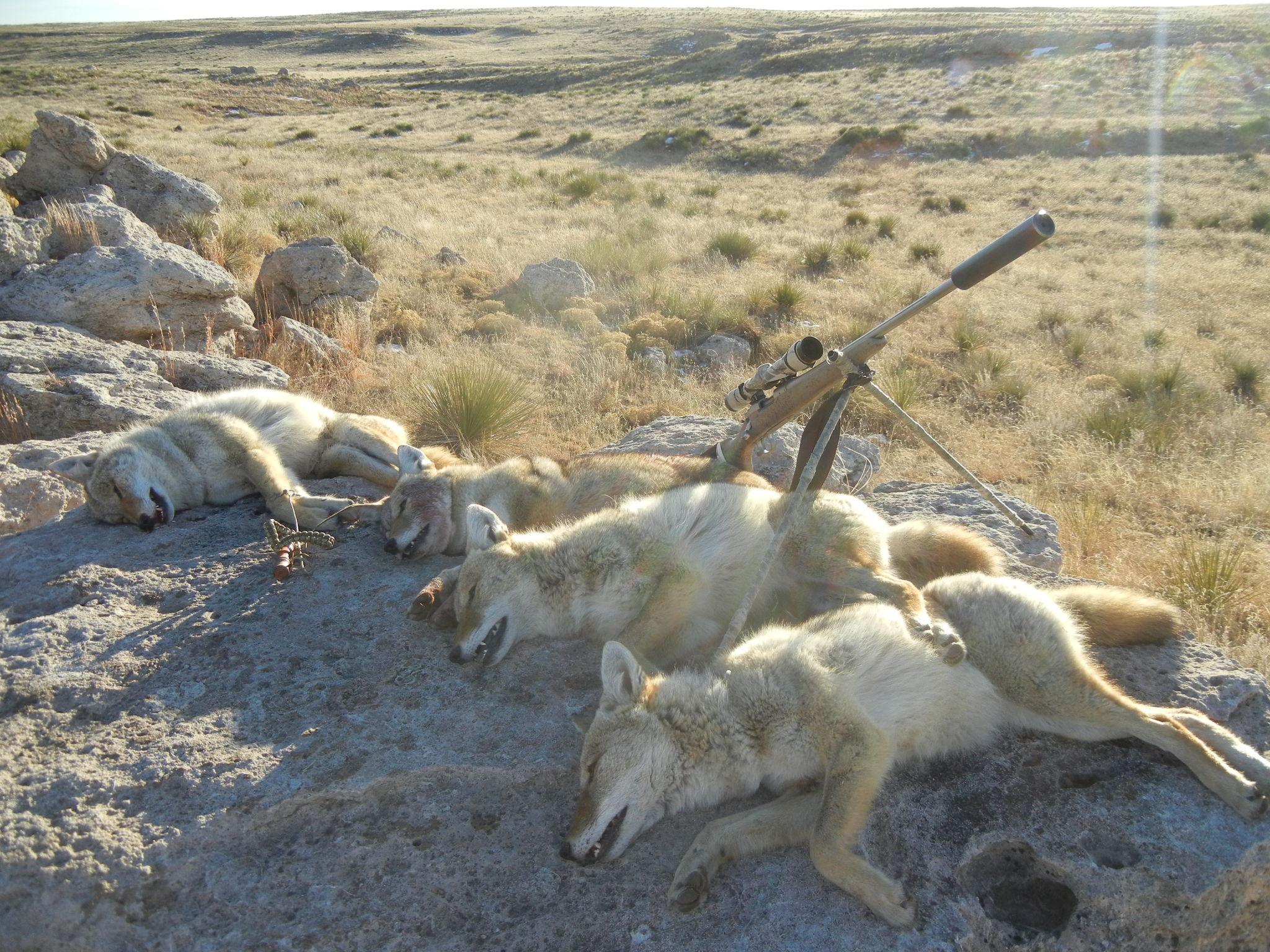 Thank you sir! That was great recollection, you obviously are able to keep your calm and close the deal, nice work.
D

It takes self control to remain calm as you say too many people get buck fever and just start dumping rounds especially with so many AR15's out there .
You must log in or register to reply here.
Share:
Reddit Pinterest Tumblr WhatsApp Email Link