A Minnesota Deer Covereed In Warts 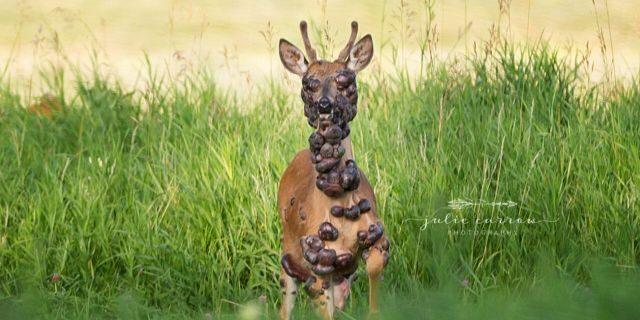 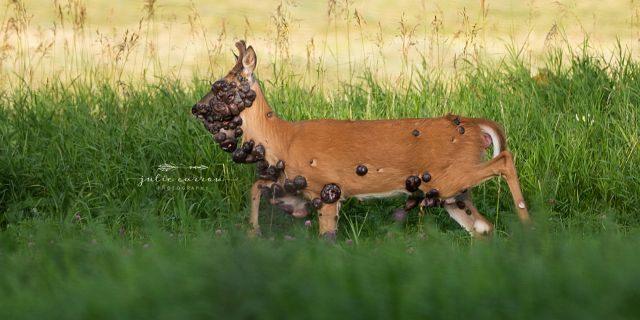 Poor guy, I hope he gets some relief soon.

An unfortunate deer covered with tumors has been caught on camera by a photographer in southwestern Minnesota.
Julie Carrow posted images of the deer on Facebook on July 25. “This to me is just heartbreaking,” she wrote, noting that she had contacted wildlife officials. “Hoping this post will help this little man,” she added.
Citypages reports that Carrow was photographing senior portraits in Pipestone when the wart-covered deer wandered by.


Minnesota Department of Natural Resources told Citypages that the deer was suffering from a very bad case of fibromas. “They are popularly referred to as skin tumors, or simply warts,” the Department explains, on its webs
Fibromatosis, however, is not a cause of deer mortality, according to officials, who added that the disease is not known to infect humans. The Quality Deer Management Association notes that particularly dense fibromas can impact a deer’s eyesight, breathing, feeding or mobility, which can leave them more at risk for predators.
“Its main significance lies in the consternation and concern experienced by the hunter who shoots a deer covered with ugly-looking lumps,” the Department says. “Though they don't harm the meat, fibromas are repulsive to most persons and therefore render a fine trophy aesthetically undesirable.”

Sad indeed,,, but this is part of the cycle of life... We see lots of crippling things on furry critters in our parts...

3 legged Grizzlies,,, Deer and Moose... Deformities and of such...

Yes it is awful that this occurs,,, but the cycle of the food chain will continue with or without human intervention...

Lifes lessons for us to be aware of fore sure...

Would you pull the trigger? I’d let him walk

Oldschool280 said:
Would you pull the trigger? I’d let him walk
Click to expand...

I’d put him out of his misery.

That guy better be rich, cause he is not getting any doe love without it.

I know that laws are laws, but I would put that deer down and burn the carcass. I'm not letting that thing run around with the rest of the deer in my area if I can help it.
J