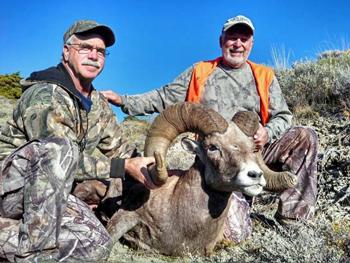 Okay, I confess; I have a love affair with the .270 Winchester Short Magnum (WSM) and reloading. This affair with the .270 WSM began when I began my quest for “The Lunchbox Hunter’s Long Range Rifle” or what I term a “Multi-Purpose Hunting Rifle” (MPHR). Currently, my MPHR is a Winchester Model 70 Shadow in .270 WSM. However, the research that led me to this rifle has piqued my awareness in the famous .270 Winchester.

My hunting partner in Montana, Bob Anderson swore by his Winchester Model 70 Featherweight in .270 Winchester. I see .270s everywhere. I recently received the 50th anniversary edition of “Handloader” which contained a reprint of the first edition. What was the Pet Load in that edition? You were right if you said .270 Winchester. While my awareness and interest in the original 27 caliber were piqued, the .270 WSM remained the apple of my eye.


My original love affair with firearms began in 1959 with a .22 rifle I earned for selling Christmas cards, and my second love affair with firearms began in 1966 with reloading. Two significant events happen in 1966. Event number one was I began reloading. Event number two was ”Handloader” began publication. In 1966 I worked at a gas station in Savannah, Georgia for $0.50 an hour. After two weeks of work, I purchased a Lee Loader for $9.95 in 38 special, a half-pound of Bullseye, 100 CCI primers, and a used Lyman bullet mold in .358.

The owner of Mack’s Gun Shop warned me on the use of the dipper in the Lee Loader and told me I needed to buy a scale. However, I was out of the money I had set aside for my new hobby. The owner did give me a copy, well worn, of a new magazine he had called “Handloader,” and told me that they were normally $0.75. He told me to pay attention to the article on “Basic Handloading.” He stated, “It contains instructions on your Lee Loader.”


In 1966, I was fifteen years old and owned a 38 Special, S&W Victory Model that was payment for cutting grass for a WWII United States Marine veteran for a whole summer. To keep it fed I began reloading. I would melt wheel weights in an old cast iron frying pan and holding my Lyman mold with vice grips mold bullets. I later obtained a Lee lube and sizing kit in .358 for sizing and lubing bullets, because of many hours of scrubbing the bore clean of lead deposits. Several older men at our shooting range, a local sand pit, called me the “Reloading Kid.”

A 38 Special reloaded by the “Reloading Kid”

I began reloading rifle cartridges when I obtained my Winchester Model 70 Heavy Barrel in .243 Winchester, after returning from Taiwan. Again, I used a Lee Loader. I loaded 100 grain Speer’s soft point spritzers over IMR 4831 with the kit for deer hunting, until I returned to Southeast Asia. In the mid-1970s I purchased my first press and dies manufactured by Pacific. I was bitten by the reloading bug and was a good mail order customer of Lock Stock and Barrel in Valentine, Nebraska.

A deer and coyote were recently taken by my Japan and Missouri hunting partner, John Bailey, with my .357 Mag. reloads. I took an 8 point Eastern count whitetail with my .270 WSM reload at over 350 yards.

John takes a coyote with my cast bullet 158 grain with my .357 mag. reload


I digress to my original statement: .270s are everywhere. The .270 Winchester was introduced in the mid-1920s and was made King of the Hunting Cartridges by Outdoor Life’s Jack O’Connor. Additionally, in ”Handloader” volume 1, in 1966, Ken Waters wrote, “For the first in our series we’ve chosen the .270 Winchester cartridge, a round that has been with us since 1925 but which is doubtless more popular today and more widespread use than at any time in the forty-one years of existence.”

I assert that his statement is even truer today some fifty years later. All major gun shops that I have entered have a new or used .270 Winchester or .270 WSM for sale. Gunbroker online auction has 371 of the .270 listed as of the date of the writing of this article. The .270 WSM was introduced in 2002 and brings the popular .270 into the twenty first century as a faster harder hitting round capable of dispatching all game in North America.

Three hunting partners own .270 Winchesters - John Bailey, Bob Anderson, and Brennen Maxwell. They love the flat shooting and hard hitting round. Although I do not currently own a rifle in .270 Winchester this does not mean I would not turn down the chance to own one. However, I still maintain that currently my love affair is with its oversized cousin, the .270 WSM.

Again, because of ammunition cost and the ability to tailor my loads, I turn to my second love, reloading. However, gone are the days of casting and lube sizing bullets as with my pistol cartridges of 1966. The choice of rifle bullets for the .277 has come a long way in 50 years. In 1966 my hunting bullet choices at Mack’s Gun Shop were soft point spritzers or round nose bullets.

My hunting reloads for my MPHR are an elk load of Hornady 150 grain GMX over AA Mag Pro and a deer load of 130 grain Nosler Ballistic Tips over Hodgdon Varget. Another excellent long range big game hunting load is the Berger VLD Hunting 150 grain over AA Mag Pro. Because of the .270 WSM’s moderate recoil and hair splitting accuracy, I believe the .270 WSM is the Prince of Hunting Cartridges of the 21st century.

Waiting for a .270 WSM to connect. Take one more step

Dr. Charles Watson Smith Jr. is an educator and an avid shooter and hunter. As a retired United States Air Force First Sergeant, he has hunted and shot in competition in Asia, Europe, and North America. Charles has four passions: (a) A passion for introducing hunting and shooting to his special education students and young people, (b) Long range shooting, (c) Reloading, and (d) Hunting and shooting with family and friends.
Reactions: corsair4360 and West Calamus