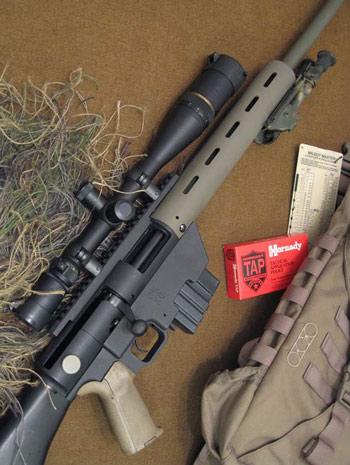 I was fresh out of Remington 700s - right hand, short action 700s to be more specific. Mine are the superior left hand versions, which are great unless you're right handed, as my boys are. So doing what any dad would do, I bought two right hand, short action Remington 700s for my boys. This will be the story of the first one. My goal was to make a switch barrel rifle so I could start out with a light recoiling caliber and then work up to a .308. I found a barreled action with a heavy barrel .204 and thought that it would be a good starting point. I found out why it was for sale after I shot it, but I'll get back to that in a moment. I already had a spare 700 .223 sporter weight barrel sitting in the corner and Mr. Del contributed a couple of .308 Heavy Barrel take-offs to the cause. I purchased a used sporter weight 7-08 barrel and was ready to roll.

This is a MAK XC tube gun kit, in its Tak-MAK switch barrel format. Inside the aluminum receiver tube is a Remington 700 short action with a factory .308 barrel cut down to 20 inches. The tube has been modified to retain the factory safety. On top resides a Leupold 6.5-20X scope in Burris rings, along with a Harris bipod, Magpul MIAD grip, AR-15 A1 stock, Alpha Industries 10 round magazine and 'Big Head' aft cap screws. It's in the company of a ghillie cover, Mildot Master, box of TAP ammo and an Eberlestock Gunslinger backpack with integral rifle pouch.


204
I started out by bedding the 26" .204 barreled action into a McMillan stock. With great expectations I set up some orange dots at 100 yards, grabbed four boxes of factory ammo and got the ball rolling with a 3.89" group with the 40 grain Accutip-V ammo. That's right - the decimal point is after the '3', not before it. But I wasn't discouraged - many of my projects start out like this. I tried some 40 grain Vmax ammo and shot a much improved 3.86" group. There's progress - at this rate, I'm just 120 groups away from the quarter inch club. Plan B - let's try some 32 grain bullets. The 32 grain Ballistic Silvertips shot 1.03" for three shots. The 32 Vmax was the velocity king at 4062 fps and produced a three-shot group that was one inch even. The second group was .88" with two shots touching. Still not too good and can someone tell my why the Remington 1:12 twist barrel won't shoot the Remington 40 grainers? I took a peek at the crown (my previous article not withstanding) under a 10x stereo microscope and didn't see any obvious problems, although I did notice that one of the lands had a gouge in it.

I decided to chop a couple inches off the muzzle to get back to "good" lands and maybe find a better, tighter section of barrel. I'm happy to say that the accuracy did improve with the shortened barrel. The downside was that although mama's little baby loves shortnin', the speedy little bullets didn't care much for it, losing about 100 fps. The 40 grain Accutips dropped from 3690 fps to 3615 fps. The 32 grain Ballistic Silvertips dropped from 3960 to 3855. The 40 grain VMax bullets dropped from 3735 fps to 3625 fps. I wondered about headspace so I got out the Stoney Point Head 'N Shoulders headspace gauge and checked some factory ammo. The unfired Accutip-V, Ballistic SilverTip and Hornady VMax all ran 3.555 to 3.557" long. By comparison the fired cases ran 3.559". No red flags there. The fired case mouth's ID was .206". Also OK to me. The cases resized in my RCBS dies measured 3.557" with the case mouth ID of .201".

I checked the jam length and found that I would have to load the 32 Vmax bullets out to 2.451" COAL to jam the bullets into the lands. Unfortunately, at that length the neck barely holds the bullet. I played around with different bullets, powders and cartridge overall lengths (COAL) and had success with Sierra 39 grain Blitzkings, in Winchester brass, BR4 primers, 28.0 grains of W748, loaded to 2.296" COAL. Those gave me a .15" three shot group at 3600 fps. Look out ground attack and airborne squirrels, the Squak-MAK is ready. A 'squak', by the way, is what my former boss, Bob Murphy, called squirrels. With Hornady brass, BR4 primers, 29.5 grains of W748 and 32 grain Vmax bullets loaded to 2.298" I fired a .44" group at a muzzle velocity of 3965 fps. These were with a recoil lug .189" thick.

I fired four types of bullets into 10% nominal ballistic gelatin at close range (25 yds). The 32 Vmax at 4062 fps produced a 5 inch spherical explosion of copper and lead fragments. OK- it wasn't really an explosion but a varmint would be in no position to argue the point. I've heard that if a jackrabbit gets hit with one of these, it looks like he ate a grenade. The 32 grain Ballistic Silvertip at 3962 fps penetrated 10.5 inches, with the first 6 inches containing a grapefruit size explosion followed by the copper base pushing thru an additional 4 inches. The 40 grain Accutip-V went 7.5 inches at 3691 fps. The 40 grain Vmax penetrated 6 inches at 3735 fps and also blew all the way through a vicious 'chuck intending to do me harm. These gel shots were fired before I shortened the barrel.


Since I wanted to make this rifle into a switch barrel I did my best to remove the barrel. I had the barrel vise and I had an action wrench. No dice. I contacted Remington and was informed that "most of the 700 barrels are Loctited on with red Loctite and they are installed with about 120 foot pounds of torque." I tried heating the action to soften the Loctite. No dice. So I sacrificed the recoil lug. I drilled .16" diameter holes in the lug from 9 o'clock up to 12 o'clock and around to 3 o'clock. Then I connected the dots with a MotoTool cut off wheel. Then, using a screwdriver and hammer I broke loose both thin arcs remaining, leaving only the bottom half of the lug pinched between the action face and the barrel shoulder. Using a pin punch and hammer I tapped the lug free. Even with the recoil lug removed, the barrel still wouldn't come out. So I heated it up once more and was finally able to turn it off once the Loctite softened. The lug that I removed measured .189" so I replaced it with a lug of the same thickness. You can buy used lugs for about $15, but they come in various thicknesses from about .176" to .189". I polish and thin out the too-thick ones, if they're close to what I need, on wet-dry paper. A surface grinder would be pretty handy for this too. You can also make shims from the steel shim stock that Brownells sells. It comes in various thicknesses.
Next page: Tak-MAK, Squak-MAK and Flak-MAK - 2 >