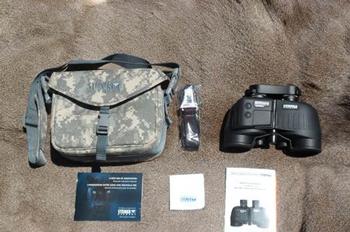 I recently received these binoculars from Steiner and thought that I would do a review on each of them. I’ll first start with the 10X50 LRF binoculars as these were of the most interest to me for the type of shooting that I do, tactical precision rifle competitions with most of the stages being at unknown distances. I also hunt big game in some fairly open country in NE Montana, so quality optics are a must for locating game. A very good LRF is critical for success in both my shooting as well as hunting. The 20X80 binocular has piqued my interest as an alternative to a spotting scope for long range hunting where I have the ability to spot game from base camp or while traveling the back roads in my vehicle.

In the past, I have utilized a monocular style LRF in conjunction with a standard binocular. The scenario would typically go something like this: I’d scan with my binocular to locate targets and make a range card with terrain features as marking points for the targets. After I found the targets with the binocular I would then pull out my monocular type LRF with a 7X magnification and acquire the distances to the targets. Many times I would be swapping between the binocular and LRF as I found the targets so that I was writing down my ranges as I went along. The result was that I spent a lot of time swapping between the different optics. Additionally, the binocular I have isn’t a cheap binocular and the LRF isn’t exactly cheap either, so I have a lot of money tied up in these two different optics combined. Hunting big game posed the same problems, locate the game with the binocular and then pull out the LRF to get a distance if time allowed.

I compared the Steiner 10X50 LRF binocular directly to a Zeiss Victory 10X45 LRF binocular on a partly cloudy day with temps in the 80’s. I chose to compare the Steiner to the Zeiss as these are both considered top end optics, but they also both have different optical design and features. The Steiner is a porro prism design and each individual eyepiece is adjusted for focus, after which no further focusing is needed for a change in viewing distance. This makes things very easy when scanning for objects as everything is already in focus. Additionally, this binocular design should be more robust as there are no internal moving parts. In a porro prism binocular, there are also fewer lenses for the light to travel through, which means higher light transmission to the eye. In contrast, the Zeiss is a roof prism binocular that utilizes a center focus wheel to focus on objects at different distances, but each eye has its own diopter adjustment.


The Steiner 10X50 LRF binocular weighs 44 ounces and measures 8.125 inches wide, 5.625 inches long, and 3.250 inches tall when laid flat. This binocular is a little bit bigger dimensionally than many other 10X40 to 10X50 roof prism binoculars but not much larger than similar magnification porro prism binoculars. For carrying, I received these binoculars with a very nice padded case with carry strap as well as a simple neck strap that can be attached directly to the binocular. The padded case is an additional item that can be purchased for the binocular. The objective lenses are protected by a nice set of rubber covers that are attached but removable. The ocular lenses have a molded rubber cover to protect the lenses and it can be attached to the neck strap.
Next page: Steiner 10X50 LRF Binocular and 20X80 Binocular Review - 2 >