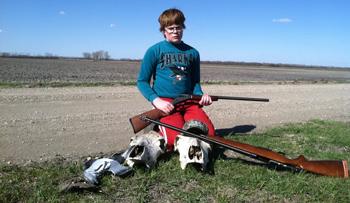 Since I began my lifetime firearms procurement program, which turned into a buy/sell/trade trial that has spanned over forty years, I have owned many single shots. From pellet guns in .177, to the Ruger #1 Tropical Rifle in .458 Winchester Magnum, my interest in things "single" has included shotguns, muzzleloaders, gopher eradicators, moose droppers, deer harvesters, predator plunkers, and varmint chasers.

My current bouquet of single shots includes a new H&R .357 Magnum, a .243, a .22 Hornet, a 30-06 Springfield, a 12 gauge shotgun, and a .50 caliber muzzleloader. Harrington & Richardson, New England Firearms, Thompson Center, and Marlin are the names imprinted on these long guns. All are accurate and have accounted for the game they were purchased for.


My anxiety at having to walk the woods with a single shot has never come when in the woods. Rather, it has come when considering what to carry into the woods. Once in hunting land I've never felt I brought the wrong tool for the job, and they've never let me down because of their singular construction.

Have I missed? Yup. But rarely when packing a single shot, and never because of carrying a single shot. The care taken before the shot has ensured success more often than not, knowing there is no fast followup. This has made me a better all around shooter, even when packing a repeater, because the same principles apply no matter what your weapon.

This is one of my sons, at thirteen, on our first pigeon hunt of that year. Single shot shotguns are useful in training youngsters in gun safety, ammo conservation, accuracy, and they are usually light enough to carry while chasing elusive critters - all day.


Years ago I pursued Saskatchewan moose with the aforementioned .458WM. I'm not sure if I could have beat the moose into submission with the crowbar that was its barrel, but my arms were six inches longer after that week. My right shoulder was a black and blue mess after 11 sighters off the bench, in preparation for shooting a barn sized target in the woods.

My physical health would have been better if I'd just used it to shoot a few gophers, before playing hide and seek with The Swamp King. I did shoot a few gophers with that Ruger before I retired it to a dealer's rack, though. I also knocked down a good sized tree for my father's entertainment once too with three of its 500 grain pills.

A couple of other Ruger #1s in 30-06 went through my hands, one of which poked called coyotes, excavating gophers, and marauding rabbits. The other went by so fast it never accomplished anything except being pleasing to the eye.