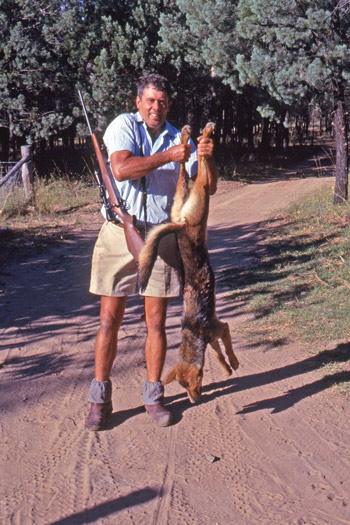 Much has been said, and written, over time about Old Folk ... mostly along the lines of: “Canʼt teach an Old Dog new tricks” ... Occasionally that may be true, but a much more apt line would be: “Never underestimate Old Dogs”!

The first sign of a dog "in"...A string of dead and dying sheep with bits torn off them...


As one born in 1946 I am probably getting close to the Old Dog tag, so had better be careful!! Most of my first 50 years was spent on a 12,000 acre property on the Western Darling Downs, between Chinchilla and Condamine in Queensland, Australia. We ran some cattle, mostly sheep and in later years when drought would allow we bred cross-bred lambs. With large areas of Forestry around us, and the Barrier Fence relatively close by, keeping an eye out for dog activity was second nature.

3rd of 5. As it says, this was the third of a family of 5. Caught this bloke leaving the scene of the crime at dawn … 130gn 270 Ballistic Tip as a going away present …

My family have had a generations long interest in natural history, so from a very early age I was encouraged to observe things around me very carefully ... something that easily became a life-long passion. Much of our property was light soil, difficult to make a good living from, but a wonderful canvas for learning to track different animals, though I am a novice compared with some of the old Indigenous Trackers.

The last one! Got her on the third attempt, as she killed her last lamb in full sight of me … confidence got her in the end, as did the 270 up the butt… An old dog.

It is still great fun though to figure out what has been going on during the night, and especially satisfying to be able to track a dog back from where he had been killing to where he was sleeping it off, and give him a little present.

The preferred view of dingoes in sheep country… Burdekin cane growing area around 2009.

My father gave me my first rifle when I was 4, a Daisy air rifle and he taught me how to use, care for, and respect firearms with that. A year later I graduated to the ubiquitous Lithgow single shot 22, along with most of young rural Australians, and the lessons continued with that. Now, a lot of years later, I can look back very happily at more than 60 years of active hunting, totally accident free thanks to the thoroughness of those early lessons mixed with a good dose of self-discipline!

The drives were called when someone found signs of a dog “inside” their boundary netting fence, normally dead sheep, and there were no obvious tracks leading back out again, meaning the dog was most likely still camped up somewhere in the paddock. Two groups of people were needed, one lot with shotguns who were spread quietly in a line on the down-wind side of where the dog was estimated to be, and then a line of beaters on horses or on foot who would start from the upwind side and make as much noise as possible, stockwhips, cow bells, tin buckets and a stick, or just yelling.... who would start off in a line and attempt to drive the dog(s) into gun range.

Occasionally we were not successful, but on the vast majority of drives there was the desired result, occasionally more than was bargained for! I can remember several where 2 dogs came out, and one where the beaters came right through to find that 3 dogs were down... One of the beaters looked at them and said he had seen a dog that was none of these, so a quick decision
was made to re-drive the block on the off-chance ... we got 2 more!!

The damage that these animals did cannot be underestimated. Almost like some humans,
they seem to kill for fun rather than simply for food.

The worst one we had that I can remember killed 56 sheep one the first night, 53 on the second, we trapped him on the third. This at a time when these wethers were worth roughly a weekʼs wage each and we had bought them barely a week before, a huge blow. We used everything at our disposal then to fight with, Lane brand dog traps were the standby tool. We added strychnine bound loosely in rag to one jaw so the dog would very quickly get a dose trying to free itself, so we normally found very dead dogs in the trap early next morning.

If we found that they were coming and going through the same hole in the netting it was a spot for the deadliest tool, a set shotgun with a trip wire across the hole, a “spring gun”. Very effective unless a wallaby made a silly mistake and crossed first. These could not be set in paddocks with stock, or across roads, though there were occasions where, in near desperation, they were.

There is the odd front wheel of a motor bike that has come to grief, and a few white hairs on the head of a forgetful rider..... Most of the dogs in those years were undeniably dingoes, mostly red or yellow, though we did get the odd black and tan. Towards the end of our time there, mid 90ʼs, the picture was changing, with “pig dogs” starting to appear. These were worse, they were bigger, stronger, just as blood hungry, and with little fear of humans, though fortunately we never had a physical attack from them.

I shot two that were very Alsatian in appearance. My little Lithgow lasted a few years before I gathered enough roo skins to get a neat Sportco 10a repeater, which I still have! I used to sit with my father in the “gun line” on drives and we managed to share the kill a couple of times, though my 22 probably did not add much to the load of #2ʼs out of Dadʼs Greener, which I also still have, now in the family for 6 generations ... still doing its job.

Next page: Shades Of Grey