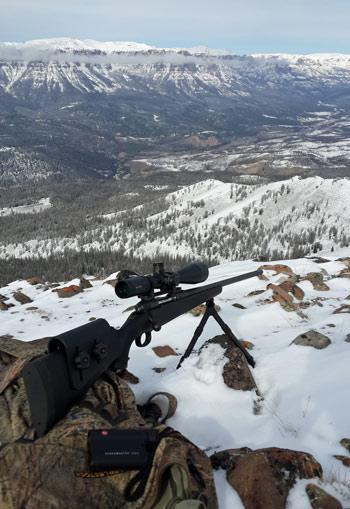 As I crested the last bend of the trail and looked up at the ATV’s a mere 200 yards away, my mind began to wander and I stopped to take it all in. I stood there in the sun, horns strapped to my back and turned to see my wife and three hunting buddies bringing out the last of the meat of my friend’s first elk. It’s hard to put into words the sense of accomplishment and relief that hits a person when you get done packing an elk to your destination. The weight that’s lifted off of your shoulders when you unload your pack isn’t just a physical relief, but an emotional burden is lifted as well.

As everyone got their loaded packs up to the ATV’s right behind me, we started to jokingly talk about where we were going to go eat when we got back to town. We all got on our respective ATV’s and headed back down the road to our pickups that we had left earlier that morning. My mind started to wander on the trip back down and I started to re-live everything that had happened to me in the previous days. During most years I feel fortunate to get out and encounter a trophy bull elk, especially with friends and family. Now to have my close friends, family, and myself not only encounter but harvest four trophy class DIY public land bulls in one week’s time is just plain crazy.

The Phone Call
I was lucky to have the last two weeks of October off due to a career change and was able to try and get some elk hunting in and take advantage of what little season I had left. I had been shooting my first true long range setup all season and was really wanting to get out and put it to the test. One last trip to the range to check my zeros and shoot a 600 yard group to make sure my drop chart was correct, and it was time to get out and try to find some elk. My brother-in-law and I had a day to get out before we had to help with preg checking for a ranch my father-in-law manages, so we decided to sneak out and see what was happening up in the mountains. We got up at 5 am and headed up to the ATV trailhead where we rode our wheelers in for 45 minutes to get to the base of the mountain. We climbed up the steep mountain above timberline and almost got to our first lookout when we heard a bugle. Both of us stood there dumbfounded, as it was the 4th week in October. As we came over the overlook we heard multiple bugles again and started to see large numbers of elk immediately.

We like to hunt above timberline, trying to catch the herds migrating from the high country down corridors to stage up above their winter range. This can be very rewarding and discouraging at the same time. You will always see elk and sometimes some very good bulls but you can’t always get to them as these elk are always on the move. We got up and started glassing the elk and found some decent bulls but nothing I was looking to shoot. We glassed for a little while longer and found a group with two 6 points that was coming over a saddle on the mountain we were on. We hurried up to one of our last lookouts and set up on them as they came across a ridge at about 900 yards, and we decided the biggest bull wasn’t quite what I was looking for.

We started a fire to warm ourselves up and glassed across the basins to our east and west for the midday portion of our hunt, and came up with a game plan for our evening hunt. I would stay up high and my brother-in-law would go to another vantage point to glass and he would radio me if anything showed up. Within thirty minutes he got on the radio and told me he found a good one coming out of another drainage toward a spot where we could set up for a shot. We scurried down the mountain and set up looking at an open hillside we expected him to come through. I ranged the hillside from top to bottom as we heard the bugles up in the trees and we waited for them to come across. We sat there until right before dark and listened to the multiple bugles coming off the hill but the elk never made it to the clearing. We headed back to the ATVs and headed back down the mountain to the ranch for a few days of work.

Thursday and Friday passed as we worked cattle both days and we were just starting to relax when my phone rang. I had talked to my brother Tim a few days earlier and he had been hunting a very good limited quota area in Eastern Wyoming by himself, so I told him to call if he got anything and I would come help him out. As I saw his name on my phone, I knew that he must have gotten something. I answered and he informed me he had gotten his bull that morning and he was going back in to get him out the next morning. He told me the story on the bull and stated he had seen the bull feed down a ridge and bed down. He then snuck up on the bull to within fifty yards and waited as the bull was sleeping with his head down. He said he had waited for long enough and started to whistle at the bull as he continued to keep his head down and sleep behind a log. He then started to yell at the bull for minutes before he finally picked his head up and presented him a shot. He took the shot and the bull was dead. He joked to me it was ironic that he had a long range rifle and did all that practice all to shoot and elk from bow range with it.

We came up with a time and place to meet the next morning and I got packed up and headed to Casper. I called my buddy Brendon there and he volunteered to help get the bull out as well. We met up with Tim Saturday morning and hiked the 2 miles into where he had the bull quartered and cached up. We did some de boning to the quarters to further lighten up our loads and headed up the 2 miles back out. It was a decent pack out where the first quarter mile was straight uphill but the rest was just a gradual downhill. This was my first experience packing meat with my Eberlestock pack and it handled it great. I had ½ of the meat on mine and Brendon had the other half on his while Tim packed the head and cape out. We got the bull out to the trailhead around 1:00, and headed up to Douglas for some highly anticipated food. After we ate, we parted ways and I headed back up to Dubois to try and get an elk for myself.