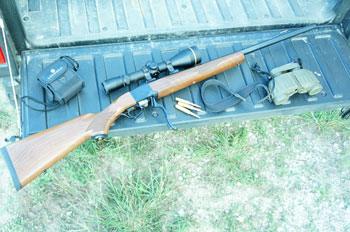 Bill Ruger, 1916-2002, was and will always be a giant in the firearms industry. Like those who lived through the great depression era, he had a tremendous work ethic. Along with firearms he loved to collect fine old cars. He loved the fine lines of these cars. Even though his first firearm design was a pistol, his baby was the Ruger #1. He would listen to hunters and shooters for ideas. There were a lot of hunters that would appreciate a rifle that they could carry in the woods on stalks which might possibly end in a single well placed shot on their game. Bill Ruger’s ability to listen to the needs and desires of shooters and hunters was one of his great attributes.

Ruger #1 ready to head out for a hunt.


The Ruger #1 is loosely based on the Farquharson rifle. It is a hammerless falling block by design. The safety is conveniently located on the tang making it a rifle for both left and right handed shooters. The barrel is held on a hanger type system with the forearm attached by one screw at an angle which is a typical Ruger design. The angle pulls the forearm to the hanger. Being a single shot, the action is short, cutting off approximately four inches from the length of a typical bolt action.

The rifle tested was chambered in a new caliber for Ruger, 6.5-284, made popular by the long range shooters and hunters. The one I received was one of the first off the assembly line. It was so new that Ruger had to wait to find factory ammunition for proof testing. As soon as I found out that Ruger was coming out with this caliber I was on the phone with the marketing folks. This is one of those rifles that really excited me and that is not easy these days with rifles. When it arrived finally I had several reloads ready to go.

The Ruger’s under barrel forearm hanger.


The powders used were the H4831SC, H4350, IMR4350, RL22 and RL19. The bullets I chose were in the 120-142 grain range from various manufactures. This Ruger #1V was scoped with a Leupold 4.5x14 CDS scope. This choice was by design because if this rifle shot well, it would be with me opening day of deer season 2013. After sighting the rifle in at one hundred yards; the load, shoot, load, shoot began till I found that sweet spot which the rifle really liked. First thing I observed was the 6.5-284 preferred the H4831SC. With a twenty-six inch barrel velocities were very sufficient. The worst group this rifle shot was right at one inch for five rounds. Lapua brass was used for all testing and you cannot get much better brass.

The 6.5-284 has a bad rap for being a barrel burner. I suppose if you ran maximum plus rounds through the barrel at a very quick succession; your barrel may not last long, especially if you are shooting for extremely small groups. The #1 is a hunter’s rifle and I doubt the average hunter will shoot eight hundred to a thousand rounds through the barrel during the life time of the rifle. I ended up picking two loads for this rifle. The best load was 51gr. of H4831SC under a 140gr Berger VLD/hunting bullet with an OAL of 3.21”. It would shoot a group of five shots in .389 inch at 2748fps. The Berger 130gr VLD/hunting over 52gr. H4831SC with a 3.19” OAL shot .411” five shot group at 2851fps. You might ask why I do not shoot target bullets. I shoot the bullets that I would use. This rifle will be used for hunting. I did shoot several Hornadys, Nosler BT’s and Barnes. Each did extremely well and the group sizes were almost as tight as the Bergers. Now it was time for me to decide what to have the Leupold engrave on the CDS dial. I chose the 130 gr. Berger. Since most of my hunting is for Texas size whitetail, the 130gr Berger gave me velocity, accuracy and enough terminal velocity for deer. If I ever decide to take it on an elk hunt, it will be easy enough to call Leupold and have a new dial engraved.