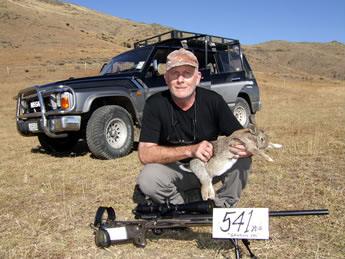 This is the best rabbit cartridge on the market. The one caveat would be that one isn’t shooting for meat! I have been shooting rabbits for 25+ years and have used a variety of calibres and firearms with great satisfaction from muzzle distance off to many 100’s of meters.

The .204 provides a fast flat shooting round with little noticeable recoil allowing one to spot your own strikes. In itself this is a major advantage because without being able to ascertain the fall of shot we cannot correct for windage at long range.

With the advent of affordable rangefinders it is possible to accurately wind on the required elevation for long range targets. Correct windage is another matter entirely as even those with vast experience such as big bore shooters and “F class” can find it difficult to judge wind under variable field conditions. Therefore it is easy to fail in predicting the proper hold off to ensure centre hits.

Long range shooting can be deceiving as a variety of winds can be encountered on one long shot. I had such an experience recently in the South Island of NZ attempting a shot at 460 meters. A comfortable prone position was adopted on property vehicle track [short grass] using a bipod. The rabbit was ranged with my Leica rangefinder and the correct elevation adjustment made to the scope.

The grass at the target range was observed to be almost blown flat so a significant amount of wind was occurring at 460M. My position was experiencing similar conditions and I allowed accordingly for a full mill radian [3.47 MOA] of windage hold off. I knew the elevation setting was spot on from actual verification on paper at 200 / 300 / 400 / 500 M. On attempting 2 shots at the same range I had no result.

No hits observed on the ground and certainly no rabbits toppling! The third shot was finally observed showing a wind movement of only a half mill radian [about 23cm]. I adjusted the windage hold off to half of the previous shots and rolled 2 rabbits in a row in the same vicinity and 460M distance.

These small projectiles at long range give very little strike signature especially if there is even a small amount of rain about. The lesson learned here was the fact that about 150M from the muzzle there was a steep hill on the windward side of the projectile flight line. This hill was approximately 250M across the base and provided a “wind shadow” with little effect on bullet divergence. I had neglected this fact and held on what wind I could see at the target and as well as the shooting position having exposure to the same strong wind.
The Scope – Leupold Tactical MK4 8.5-25 TMR Illuminated.

This scope is fairly new to the market with a TMR [Tactical Milling Reticule]. I chose this scope because the reticule has fine hash marks on the vertical and horizontal stadia. At 25x these hash marks equal one mill radian [3.47 MOA]. Therefore if one knows the distance it is easy to hold off a given amount for either wind or elevation. Consistent repeatability is a basic requirement for success at varying ranges and wind effects.

I have a ballistic programme which prints a range sheet for a given load in a combination of MOA and Mildot corrections. The range solution is combined with a 16kph wind at 90 degrees. From this result one can vary hold off according to wind power and direction. Usually I dial the correct elevation solution onto the scope and hold off for windage according to conditions. Should there be limited time to get a shot off then it is possible to hold over with precision as well using the hash marks on the vertical stadia of the scope’s reticule.

An illuminated reticule on this particular model was chosen for late afternoon or early morning use however after a couple of weeks continuous use in NZ I only used this option once. When I did the target was almost impossible to identify against the hillside anyway given the light conditions.

Because I am constantly dialing elevation, the scope must be repeatable in returning to my preset 200m zero. For example I range a rabbit; consult the programme and add elevation; judge the wind allowance; take the shot and then return the elevation to my normal zero. Thus the exposed tactical style elevation and windage knobs are best suited to my requirements.

Having used a Leupold 8.5-25 LRT for 5 years I can state that this Mark 4 is a noticeable improvement optically especially at the highest power. There is less edge distortion of the image when set at 25X than in my older model LRT. Both these scopes have 30MM main tubes and 50MM objectives with side focus being user friendly when engaging numerous targets at different ranges. When set on high magnification large variable power scopes offer a small depth of field and require constant re-focusing.

The Rifle
I chose the Remington XR100 for several reasons – namely it is a rigid bench rest style single shot without a magazine cut out which means greater rigidity of the action plus it comes with an excellent laminated thumbhole stock also offering consistent stability.
Another reason was that I believed this would be a great basis for a switch barrel in 223 Rem for “F Class Standard”. This is an economical solution allowing a secondary application for the rifle utilizing the same action; stock and scope.

The outfit is complemented with a varmint profile hammer forged barrel of 660MM to maximize the velocity capability of the 204 Ruger cartridges. Growing up on a property in NW Qld, I have shot since a very early age. Shooting has been my central hobby and past time for over 40 years. This is the most accurate rifle I have used so far! Although I have not shot bench rest this is what the American champion Tony Boyer would call a “hummer”.

The Ammunition
After many years of persevering with a wildcat 222 I concluded I wanted an accurate rifle and cartridge for which I could purchase factory ammunition whilst on my annual trip to NZ after rabbits. I have a friend who has carried out some developmental work on reloading the 204 Ruger with quite good results – 5 shot groups at 200M of 25MM.

However we cannot duplicate the results of the Federal Premium 204 Ruger cartridges loaded with 39gr Sierra Blitz Kings. These factory rounds in my rifle are producing consistent results of .2 MOA out to 500M!!

Bits and Pieces
There were two new items of equipment utilized this year which I will never be without for long range shooting in the future.One being a custom level carefully attached to the scope main tube allowing a quick reference as to canting the rifle. After using this most beneficial aid I could not believe how often I was canting the rifle. The level has a couple of spring detents allowing it to be folded against the scope tube out of harms way when not in use.

Long range shots [I believe beyond 300M] can be severely hampered by canting. Consider that when I add elevation for a 500M shot of say 8MOA that this needs to be vertical to achieve the desired strike at that distance. Imagine canting the rifle off to one side 5 degrees and the impact will be to that side and low. When I am targeting a rabbit with a diameter of 75MM then this becomes a serious factor towards success.

Secondly, a cosine indicator resides on the scope tube. This measures the angle up or depression down of the barrel. There is an adjustment needed to adjust elevation calculations should one be shooting up or down hill. Although the ballistic programs carry out a complex calculation, a simple method of explanation is that the shot be treated as the horizontal distance. This will be shorter than the actual distance measured to the target.


Thirdly, I added a Harris bipod with the short legs [most suited for shooting off vehicle bonnets] and swivel function to the fore end. These attach quickly and simply whilst allowing a very steady hold on distant targets. The swivel function is adjustable for tension and combined extremely well with my level to quickly line the rifle up straight and consistent.

Fourthly, a Kepplinger set trigger was installed by our Armourer, Peter Knowlton with a set weight in the region of 100GM. I am a lover of good triggers and like them as light as safely possible. This unit is great and initially I even considered adjusting it heavier which would have been a first for me! After 600 plus rounds at rabbits in May 2007 I grew to like it more and more and towards the end of the trip could really “feel” the set – even at 100GM.

Along the development path I had the rifle bedded and recrowned – both of which were probably not required but were carried out from force of habit and long experience that neither of these practices will harm the performance of a rifle. Should there be a problem with either then it will show in group size and thus I had these attended at the outset.

Conclusion
The happy combination of rifle; scope and ammunition is shooting that well that I cannot bring myself to touch anything to do with it. It is performing better than I ever expected and fulfils the criteria perfectly so the “F Class “barrel languishes in the storeroom currently!!

CRM Gunsports​
I grew up on a 40,000 acre property in Australia and began shooting at 8; shot IPSC competition; sporting clays and hunted feral pigs here in Oz plus half a dozen trips to Africa. Current interest is long range rabbits on annual trip to NZ plus Cape York pig hunting each year. Beginning to compete in "F" class to help read wind.
Join the discussion of this article with the author HERE at the Article Discussion Forum.
Reactions: Brian Ranson