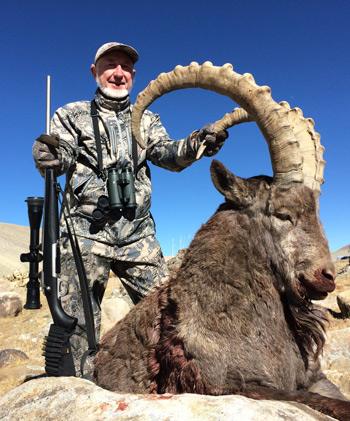 After I was able to successfully complete my Grand Slam of North American sheep, going on a Marco Polo sheep hunt became a top priority on my bucket list. Once I determined that I could afford to do this, the next priority was to research outfitters. The Internet is full of stories about people who went on these hunts and did not get the sheep they shot.

After reviewing many advertisements of different outfitters, I called Dennis Campbell at Grand Slam Club/Ovis. He was extremely helpful. I narrowed my list down to two then called and talked with them. After making my decision -- which was difficult since they were both very good -- I obtained as much information as I could about what to expect for hunting conditions. I was told that shots over 500 yards were common.

I then paid a visit to the Long Range Hunting Store, where Andy Backus was extremely helpful in choosing a long range Huskemaw scope and appropriate Sitka gear. He was also very helpful in teaching me how to obtain the data necessary to have the proper turret for my gun and ammunition in the environment where I would be hunting, which was 14,000 feet of elevation and 20°F temperature.

The Hunting Consortium scheduled my trip to start October 28 and return November 10. They wisely build in an extra day at each end of the trip in case there were travel problems. I experienced these at both ends, missing my outbound flight from Chicago to Istanbul and my return flight from Chicago to Appleton. Trip insurance is a must!

In Istanbul I met the three other hunters who would be at the Hot Springs camp with me. From Istanbul we flew to Dushanbe, the capital of Tajikistan. We were met at the airport and taken through Customs by a Hunting Consortium representative, who stayed with us through the entire trip and acted as our interpreter. We traveled in Toyota Land Cruisers through the mountains to Khorog. That trip took 12 hours. Our overnight stay was very comfortable in a private bed and breakfast.

The next day we drove 7 hours to camp. After arriving and meeting all the staff, we made sure our rifles were still sighted in. Then we had a delicious dinner and retired to our bedrooms in a building that was heated by the hot springs. It was very comfortable.

When the generator came on in the morning and the lights woke us up, we had a hot shower and breakfast and headed out in the Land Cruisers. Each of us had a driver, head guide, and assistant guide; I also had a videographer. The method of hunting is to drive through the valleys and mountains and glass for sheep.

On the first day I saw hundreds of Marco Polo sheep. My guide spotted a respectable ram and we began a stalk. The ground is covered with snow and there are no trees, just open ground and rock. We wore white outfits and walked single-file toward the sheep.

Halfway there we stopped and glassed some more and determined this was not a shooter. Later we spotted another one and made a stalk which I estimated to be close to a mile. We got to within 700 yards when a wolf scared them off. It was getting dark so we headed back to camp and had dinner.

The next day we proceeded in similar fashion. We came upon a recent kill and some wolves. Before I could get set up to shoot, they disappeared into the rocks. That day we traveled very close to the Afghanistan border. I always felt very safe during the entire trip.

Just as the sun was beginning to set, my guide spotted a good ram and we began the stalk. We were able to get within 440 yards. I steadied my Browning XBolt 300 WSM and put the crosshairs of the Huskemaw scope on the ram’s shoulder. The image was very clear at 16-power.

I squeezed the trigger and the 185 grain Berger bullet HSM ammunition did the job.
Unfortunately I was leaning too far forward in the prone position and the scope caught my eyebrow. As I wiped blood from my forehead I asked the guide if the sheep was dead and he yelled, “Yes, great shot!” The Toyota Land Cruiser joined us and suddenly my guide said the sheep had gotten up and was climbing up the mountain.

I steadied the gun on my pack on top of the hood of the car and my guide said 500 yards. I fired and the ram stumbled but kept going. My guide said 600 yards. I adjusted the turret and squeezed the trigger and the ram dropped. For the rest of the trip I kept kidding him about not knowing when an animal was dead. We arrived back at camp after dark and had a celebratory dinner.

The next morning I expected to go wolf hunting but unexpectedly found out they had an Ibex permit for me. It was snowing hard, the wind was blowing at least 30 miles an hour, and the temperature was zero. Visibility was so poor that we had to stop at a local yak herdsman’s shack to get directions. The weather cleared enough for us to spot a group of ibex bedded on a mountainside.

The wind was brutal as we climbed toward them. We managed to get to a small outcropping of rock. The crosswind was blowing at least 20 miles an hour and the snow was swirling. I put my gun on my pack and could clearly see the ibex in the Huskemaw scope. My guide did not want me to shoot while it was bedded so he howled like a wolf. It was 500 yards away. It got up and walked straight away from me for another 50 yards and then turned broadside.

I made what I thought was the proper adjustment for windage but forgot to add another 50 yards distance on my turret. The bullet struck a few inches too far back and low, and the ibex jumped. When I fired a second shot it disappeared over the mountaintop. My guide looked for it for hours but couldn’t find it. I didn’t sleep well that night. The next morning the guide took a dog with him. It kept barking toward an avalanche of boulders. The guide rappelled his way down the slope and found my ibex dead.

The 19-hour drive back to civilization was filled with interesting history of Tajikistan provided by our driver, Abraham.

I cannot say enough about the performance of the Huskemaw scope and customized turrets. Without them, this hunt would not have been the success it was. The Hunting Consortium camp staff did such a great job preparing the capes and horns that the USDA cleared them and I was able to bring them home with me and then to my taxidermist. I look forward to seeing them on my game room wall and reliving this experience time and again in my mind.
Reactions: Hubby45