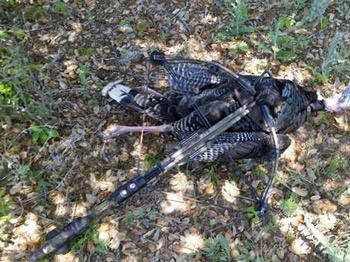 My wife had bought me this great Wicked Ridge crossbow four years ago while I was on a bow only lease in Magnolia, Texas. Over the last several years, I have only shot at one deer, twice, with only a slight nick to his chest on the first shot and a broken leg bone on the second. My grandson luckily shot that poor deer the following weekend for me.

On this day, May 3, 2014, I was going to get to the stand early and call in one of several gobblers I knew was on our 100 acre lease. Thing is, at 6 am, an hour after the alarm was supposed to go off, I decided sleeping in wasn’t a bad thing and I would hunt the noon hour, since the forecast was for a major feeding time. My wife was meeting her sister to take her to look at puppies (I was resigned that we were going to get a new dog), so I loaded up the truck with the decoys, calls and crossbow and headed off to the wild outdoors. The temperatures were already approaching the high 80’s and a nice nap during the midday sounded appealing.

I parked the truck downwind of the blind, grabbed the gear and headed to the huge pop up blind my wife had bought me (Cabela's Hunting Garage Ground Blind, 68"L x 92"W x 82"H) overlooking the feeder (Wild Game Poly Feeder) and game camera (Moultrie Panoramic 150) she had bought me earlier this year as well. The ground blind had been brushed in for a while and I knew the animals had gotten used to it.

The wind should be good for the midday hunt. After the decoys were put out, I set up my oversized bag chair, arranged the calls, loaded the crossbow and begin to communicate with the local turkeys.

Now understand it had only been about 20 minutes since I drove in, parked, walked to the blind and set up for this hunt. First call, I had two gobblers answer me from my left about 200 yards off. I waited a few minutes and called again and I knew they were heading my way. Shortly, I caught them coming towards my set up at about 50 yards and the two gobblers had a hen with them. A few more clucks and purrs and they were on a string line to my kill zone. At 15 yards, the bigger of the two birds stopped and puffed up and as soon as the other cleared, I let the carbon 20” Gold Tip Lazer III bolt fly. At the shot, there was a burst of feathers and the Tom took off, back to my left, in a semi arch and fell over dead within 23 yards of the blind. Unfortunately, it was just behind a limb that obstructed a good view/shot, so I watched the other Tom flog this dead bird for another 20 minutes. I could not get that Tom to leave his buddy alone and come back to the kill zone and he and the hen finally moved back into the brush.

As I sat there in the blind and called to the retreating Tom, I reflected on how fortunate I was to have such a great wife that supported me in my outdoor adventures. I thanked the good lord above for my family and the wildlife that he allowed me to pursue to put food on our table. Although I didn’t get my anticipated midday nap, I wouldn’t have traded this day for anything. It is now another great memory burned into my life and I will cherish every time I get a chance to tell it with my beloved friends and family. And yes, as I thought would happen, we added a 10 month old Boston terrier to our family.


Harold Stephens has been hunting and fishing from a very young age. He has mainly hunted in the great state of Texas, except for one successful hunt in New Mexico for mule deer. Harold primarily hunts feral hogs and whitetail deer, but has had the opportunity to take a couple of Axis bucks and a Black Buck doe. Dove hunting rounds out his shotgun experience and plinking cans with a pistol keeps him occupied while sitting around camp.