Mooning Coyotes on the Nightshift 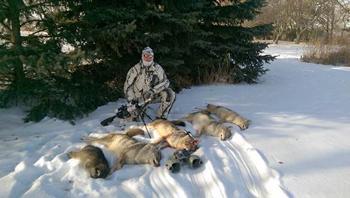 “Mooning” Coyotes on the Nightshift

My hunting partner, Tom Haas, and I had been waiting all year (as we do every year) for an opportunity to night hunt coyotes by a full moon in the winter. To do so usually requires a cloudless sky and little or no wind and, of course, a full moon or near to it. And for those who do not hunt in the state of North Dakota, the odds of that happening on the same day are slightly worse than winning the Mega millions lottery or taking a selfie with Bigfoot. But to our luck, the stars aligned and it happened the first weekend in December of 2014.

We geared up after dinner at the farm at about 6:30 pm and headed out to our first spot. The temperature was about 15 below zero and wind was out of the NW at 2-3mph. Moon rise that day was just before 5:00 pm, which meant we had plenty of shooting light by the time we set up our first stand. We decided to start out on a large slough about 3 miles from the farm. Being careful to approach the lake undetected, we walked in from about 250 yards down an abandoned road and positioned ourselves on the edge of the ice in the snow. I was excited to situate our new FoxPro Shockwave (that we paid for with fur money earned last year with my old first gen fox pro 452B analog which is now my back up call) out front and 50 yards to the left.

I started with a lone howl, then sat for about 3 minutes all quiet, then cued up “lightning jack” on low volume and we were off. About 2-3 minutes straight of “lightning jack” I stopped calling and sat quiet for a minute, then started the call back up a bit louder and ran it for about 10 minutes. About then, I thought I saw a pair of song dogs milling around on the other end of the lake. They looked very small on 6 power so I guessed they were about 400 yards away. They were still hard to see through my Mark AR scope that far in the full moon, so I lifted my Swarovski binoculars and it was confirmed, no doubt about it – coyotes! They just weren’t coming in hard yet.

I took the opportunity to switch calls to “pup in distress”. I pressed the button, and instantly both coyotes stopped in their tracks and looked our way. They took a second to acquire the position of the sound, and it was on! Here they come. I whispered to Tom and pointed out the direction of our quarry as he slowly repositioned and prepared to defend himself. It took the coyotes about two minutes to come into range, as they had stopped a few times to look at another four coyotes responding to our call - another four coyotes that we hadn’t seen yet.
At this point we were enjoying probably the best 18 minutes of our calling careers thanks to the weather. All at once we had six song dogs from 60 yards to about 100 yards out, and bearing down on us fast. We kept perfectly still until the coyote closest to the call stopped and looked around, likely smelling our dirty trap. It turned out to be the last trap he ever smelled as Tom’s .223 rang out in the darkness with deadly precision.

“BANG…WHOP!” To those who don’t know, that’s the greatest sound of all – a confirmed hit. Soon after the first shot rang out, “BANG…WHOP!” was heard as my AR15 connected with a second dog. At that point there was a mad scramble of song dogs as two more shots rang out at running dogs, with neither connecting. As we got up to go collect the downed coyotes, Tom saw one of the coyotes standing out on the lake after all of the shooting and the Foxpro was still playing “pup in distress.” The poor confused coyote was standing broadside about 150 yards out looking at the two newly dead coyotes.

I saw the flash of Tom’s rifle muzzle, and that song dog’s troubles were over, as his lifeless body hit the snow. All told, six or seven coyotes came in and when the shooting stopped 3 lay dead. We loaded up our coyotes and sat in amazement in the pickup after what just happened. We were almost speechless (a somewhat of a rare occasion between us two) as we made our way to the next stand roughly 4 miles away.

We set up on another large slough, except this one was right along a state highway. The road was busy at the time as it was a Friday night and there was a big high school basketball game in town three miles away. We stopped the truck on a field approach hidden from view, and we geared up and headed out. We walked two hundred yards across a soybean stubble field, then climbed down to the lake where we sat in front of some large boulders for cover with the wind at our backs. I started out with the same sequence - a lone howl, then quiet for a few minutes, then “lightning Jack”.

At the fifteen minute mark we switched to “pup in distress”. Once the twenty-two minute mark hit, we were thinking of leaving, until Tom whispered “Dogs coming in from the right”, just like before. Four coyotes were on their way in, when all at once they stopped and looked across the lake – lo and behold, here comes another coyote. Five coyotes total were in plain view, again. Once the first four saw the other dog running, they turned on the afterburners as if they were U.S. Navy jets leaving an aircraft carrier on an intercept mission.

When the first of the four slammed on the brakes 20 yards from the call (which was placed about 50 yards out in front of us) my AR15 barked “BANG…WHOP!” followed almost instantly by Tom’s rifle sending another song dog to his appointment with St. Peter. Or, maybe, the other place south of there, where I am told it is much warmer. At least by my Pastor. Oh! And my Mother. The remaining dogs scattered in every direction not giving us any opportunities.

It was the best opening two stands of coyote calling in my many years of hunting predators. At two back to back call stands the FoxPro Shockwave called in at least 11 coyotes that we could see in our scopes when the shooting started, and possibly as many as 13 to 15 total.

We ended up with our best night to date, and as we cannot use artificial light in North Dakota, we were limited to using moonlight. And boy, was the moon smiling down on us that night! I often think how great it might be to hunt in Arizona where the coyotes are plentiful and the weather is much warmer, or calling some heavily wooded forest for grey fox and coyotes where the wind is calm.

However, we live in a place where it can be harsh just to survive. With wind chills reaching the 30 to 50 below zero range, which can cause your eyes to freeze shut when you blink, hunting anything for any period of time becomes a real challenge. Just trying to sit still for up to 30 minutes when its 30 degrees below zero with the snow drifting around, you can suddenly find yourself freezing to the ground.

In conditions like that, an ill-prepared rifle will downright refuse to function due to something as minor as too much of the wrong weight oil. Sometimes just trying to see with the snow blowing around on the ground is near impossible, especially if you forget your goggles. All of these factors made us realize how many things had to come together perfectly on one cold moonlit night in December, on the frozen prairies of North Dakota, to bless us with such a successful hunt.

That particular night is one that Tom and I won’t forget any time soon, and it will keep us awaiting the next time that the moon is full, the wind is low, and the song dogs can’t resist the charms of the FoxPro. And we will be there to replenish heaven (or hell) with some fresh coyote souls.