Mention the word “Marlin” to anyone with even a casual interest in guns and chances are it will evoke the image of a lever-action rifle. Of course lever-actions are not the only type of firearm Marlin has produced since the company was founded back in the late 1870s, but the fact remains that Marlin and lever-action have become virtually synonymous. Interestingly enough, Marlin sells more semiauto and bolt-action rimfire rifles than anyone else.

The Marlin XL7 as tested in this review with a new Weaver Classic Extreme 2.5-10x50 scope in Warne QD lever rings on Weaver bases.


Anyway, when it comes to Marlin bolt-action centerfire rifles, it’s been a different story. Marlin’s first bolt-action rifle venture was back in 1954 when the company rolled out the Model 322; it was built on a Sako Vixen action and chambered only in 222 Remington. This Marlin rifle boasted the company’s Micro-Groove rifling that worked so well for them in their rimfire rifles. In a high velocity centerfire rifle, however, 16 shallow rifling grooves didn’t work very well, and barrels often shot out in 500 rounds or less. Only 5,800 Model 322s were sold between 1954 and 1959 when the rifle was discontinued. In 1956 Marlin introduced the 422, which had a different barrel and stock, but it was the same basic rifle as the 322. Only 354 of the rifles were sold between 1956 and ’59.

Also in 1956 Marlin introduced the Model 455, its first venture into the arena of the high-power big game rifle. It was built on the excellent FN commercial Mauser action fitted with a Marlin barrel and a stock by E.C. Bishop & Son. The 455 was a good rifle, but Marlin didn’t have the reputation as a builder of bolt-action big game rifles and it simply did not sell. Only 1,079 rifles in 30-06 were sold between 1956 and ’59, along with 59 rifles chambered in 308 Winchester, which was the only other cartridge offered.

It was 1996, 37 years after the demise of all three Marlin bolt-action centerfire rifles, that Marlin once again threw its hat into the ring with the Marlin MR7, a completely new rifle built on an action of its own design and manufacture. The Marlin MR7 was a hybrid that borrowed from the Remington 700, Winchester Model 70, and the Ruger 77. It was a very sound rifle, but offered nothing new to set it apart from those whose features it copied. It had no elegance, no panache; it simply was another ho-hum bolt-action rifle in a sea of other more established bolt-action rifles. The Marlin MR7 died a merciful death before the turn of the millennium.

Which brings us to the present and yet another attempt by Marlin to become a player in the bolt-action centerfire rifle market. Enter the Marlin XL7, a rifle that, like the Marlin MR7, is totally new and of Marlin design and manufacture, but its future looks a lot rosier than that of its forebears. Why? Well, let’s review a test Marlin XL7 rifle chambered in 25-06. Now granted, a 25-06 is at the upper end of what could be considered a predator cartridge, let alone a varmint cartridge, but it is the least potent cartridge for which the XL7 rifle will be available this year (the other XL7 chamberings are 270 Winchester and 30-06). Surely, though, with their track record, Marlin is testing the waters. With the new Marlin XL7, however, I don’t think they need worry about its future. I’m sure a short action and varmint cartridges will be added in the near future to XL7 cartridge offerings.

First off, the Marlin XL7 has the number 7 in its designation. Though it didn’t help the Marlin MR7, you can’t very well expect a bolt-action rifle to sell if it doesn’t have that magic number somewhere in its moniker!

Kidding aside, the Marlin XL7 has a lot going for it, not the least of which is its price. Normally, I mention the cost of a rifle at the end of a review, but in this case, with as many good design features as this rifle offers, its price just may be its strongest point. The Marlin XL7 will sell at a street price under $300 dressed in basic black, and right around $300 with the same stock finished in Realtree All-Purpose Green camo.

Obviously, for an honest-to-gosh big game rifle to carry such an affordable price tag, it has to be a straightforward design and one that is easy to manufacture and assemble. In this respect the Marlin XL7 borrows a lot from the Savage 110. The receiver of the Marlin XL7 is tubular, like the Savage, and employs a separate, washer-type recoil lug that is sandwiched between the face of the receiver ring and the barrel lock nut. In other words, the barrel is fitted to the receiver just like the Savage 110. The Marlin XL7’s lock nut is threaded onto the barrel shank, a headspace gauge is inserted into the chamber, and the barrel is threaded into the receiver (with the bolt in battery) until it snugs up on the headspace gauge. At that point the lock nut is tightened against the barrel lock nut and headspacing is accomplished. The Marlin XL7’s receiver, incidentally, is drilled and tapped to accept the same scope mount bases as the Model 70 Winchester. 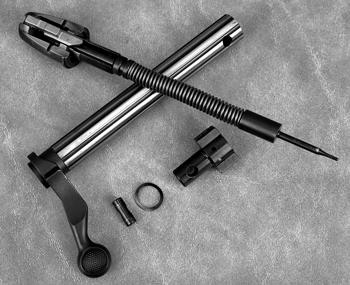 The bolt can be dismantled to the extent shown here without using tools. Unscrewing the striker assembly allows the head to be removed from the bolt body.


The Marlin XL7’s bolt is an investment casting with an integral handle shaped much like that of the Ruger 77. The Marlin XL7’s bolt body carries six longitudinal flutes and employs a separate bolt head. A tenon at the rear of the Marlin XL7’s bolt head slips into the bolt body and is held there by a cross pin that has a hole through its center to allow passage of the firing pin. With the exception of the gas baffle it’s the same arrangement as on the Savage 110, right down to its twin-lug bolt head with a recessed face, plunger-type ejection, an extractor that slides radially within a T-slot in the face of the right locking lug, along with an anti-bind groove that engages a lip at the bottom of the lug raceway.

The bolt stop/release on the Marlin XL7 could not be simpler; it’s like on the Model 70, a piece of sheet metal with an upward extension that juts up just behind the receiver bridge on the left side. Pushing down on the extension pivots the lever out of the raceway. 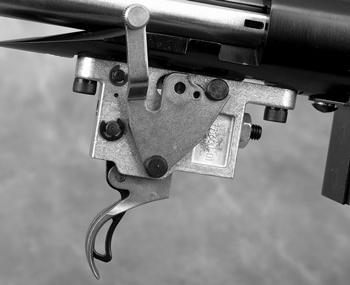 The Pro-Fire trigger is very similar to that of the Savage 110, but employs a side-mounted rather than a tang-mounted safety.


The Marlin XL7’s Pro-Fire trigger is very similar to Savage’s AccuTrigger in that it has a trigger lock that juts out from a slot in the finger piece. Unless this lightly tensioned lock is pulled fully rearward, the trigger will not release. Unlike the Savage, however, which has its safety’s thumb piece sliding in a groove at the bottom of the receiver tang, the Marlin XL7’s is a two-position side safety that does not lock the bolt when engaged. The trigger mechanism is sheathed within a very substantial housing that is bolted to the receiver at both ends. The Marlin XL7’s trigger is user-adjustable down to 21/2 pounds.

The Marlin XL7’s magazine is a blind box affair, which is not only the most economical arrangement, but also results in a stiffer stock than with a hinged floorplate or a detachable box. It’s a sheet metal affair that has a lip at the top front that engages a slot in the bottom of the receiver, while a flange at the rear with a hole in it allows passage of a machine bolt which threads into the receiver to secure the box. The Marlin XL7’s follower is plastic and is powered by a conventional “W” flat spring.

The Marlin XL7’s injection molded stock is a rather good example of American classic lines. The straight comb line is almost but not quite parallel to the bore line; there’s about a 1/8" drop between the point of the comb and the heel of the butt. A nicely shaped cheek piece, molded-in checkering panels with sharp diamonds, a highly effective Soft-Tech recoil pad, and conventional sling swivel studs complete the stock accoutrements. The Marlin XL7’s stock supports the receiver ring and rear tang, but the barrel is free-floating the entire length of the fore-end except at the tip where a mild 5 pounds of dampening pressure is exerted.

To get the test rifle range ready for this review we mounted one of the new Weaver Classic Extreme 2.5-10x50 scopes. It’s one of three new 30mm scopes that will go a long way to restoring this iconic name in the world of rifle scopes. The new line consists of three models: in addition to the one just described, there’s a 1.5-4.5x24 and a 2.5-10x56. All three feature one-piece tubes, multi-coated optics, fast-focus eyepiece, free-wheeling resettable W/E adjustments, side parallax adjustment, illuminated dot reticles, and a minimum of 4" of eye relief. Using Warne QD lever rings and the Weaver bases supplied with the rifle I had the big Weaver atop the Marlin in short order. Out of the box the rifle weighed 7 lbs on the nose; with the scope aboard, 8 3/4 lbs.

Scrounging around my ammo supplies I came up with only three 25-06 loads, but that’s enough to get an idea of how the Marlin XL7 shoots: Remington’s 100- and 120-grain Core Lokts, and Federal’s Premium 115-grain Trophy Bonded Bear Claw. The table above shows how the Marlin XL7 performed from the bench at 100 yards shooting five three-shot groups. Range conditions were good, with almost no wind and temps in the low 70s.

The trigger on the test rifle broke crisply at just over three pounds, and there was no discernible creep present. It is a very good trigger. In fact, it is a very good rifle. No, there is nothing classy or elegant about it, and there are no outstanding or innovative features to be found, but the action is quite smooth and everything works the way it’s supposed to. There were no failures to feed or eject, and accuracy was better than average. In light of the Marlin XL7’s price — and all guns must be reviewed in terms of price — it’s a lot of rifle for the money. I guess you could describe it as, in the world of bolt-action rifles, a worker bee. But what a worker it be!