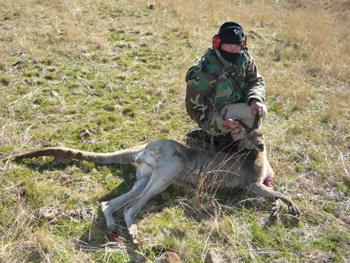 In Australia, I have been shooting since I was about 18. As I did not live in rural areas, I got into my favorite hobby a little later in life. Down under, we have a vast area to hunt in, though not as big as days gone by, thank you to population, anti-gun sentiment and of course our green minorities who just don't want us to shoot kangaroos, though that might be a story for another day.

Kangaroos in Australia are protected by law, but as most shooting and hunting is done on private lands through the use of permits, the culling of kangaroos is allowed as well as are the professional shooters who target the kangaroo for the meat & skin markets. My access is through private property, where the owners have a permit to cull kangaroos. Australia has many different varieties of kangaroos and wallabies, starting with very small rock wallabies, to the biggest red kangaroo found in most outback regions of Australia. Most of my kangaroo shooting is in the central west of New South Wales located on the eastern side of the country, just west of the Great Dividing Range.

The shooting in our rural areas and coastal stretches, where available, is excellent shooting in most forms, varmints (our feral population), consisting of mainly rabbits, foxes, pigs, goats and crows. Deer are widespread along the ranges, and though classified as feral animals (introduced species), they are now controlled using a different licensing system, though culling numbers are usually not regulated.

Our kangaroo species is widespread, with the most common being the eastern grey kangaroo population, which is in most times in plague proportions in our farming community. The kangaroo is a beautiful animal and is very majestic when in full stretch, and of course is on our national coat of arms. They move very quickly when spooked or threatened, though unfortunately breed extremely quick when the seasons are kind and the food supply is in great abundance. Most of my experience in the culling is with the eastern grey kangaroo species which is the most common on the eastern side of the country. These days I rely heavily on a quad bike to get me around, which makes it a very efficient way of moving and a lot easier on the legs. I mount my rifles on carriers across the front rack, making it very easy to get to the rifle when needed.

All types of rifles and calibers are used in the culling of the kangaroo, as they are not that hard to drop when they are stationary, and the shot is well placed. I, like most young guys growing up, started with .22 cals, my favorite being the .222 REM. As spot lighting is allowed in Australia, a lot of culling is done in this manner, which makes it simple and cost effective. But as shooters attempt to push the limits and stretch their abilities, we move up into the more powerful centre fire rifles. Along with that comes all the great electronic assistance used by long distance shooters these days, which make the challenge that more effective and rewarding when a long shot results in the instant kill, which is what all us shooters should aim and set our goals for.

Along with my Remington 700 Adl in .222, I also use a Remington 700 VSF in 308 topped with a Sightron S111 6.5-24x 50 with a Mil-dot reticule. As I rechamber and build my own rifles, I have recently chambered a MAB moly barrel in 6.5-47 lapua on a Weatherby Vanguard action, topped with Leupold VX111 4.5-14x40 scope with the varmint reticule, which would have to be one of the most accurate rifles I have shot in my life. Depending on the area you hunt, you could be hunting out 1000yds+ if you are set up for long distance shooting, though most hunting is done well within the 500yds.

Shooting under 150 yds, I will always use the .222 Rem for most of my shooting, utilizing 50gr Hornady Spire points. Shooting out to the 500-600yds, its starts to get fun, and will always start pushing the rifle and shooter to his limits. This is when I love to use the 6.5x47 Lapua with the assistance of a Bushnell 1500 series laser range finder. The reticule on the Leupold is the varmint hunters, and is graduated for a 200yd zero with markings for 300, 400, 500 & 600yds, as well as windage markings for 10mph and 20mph on all distances. I find this scope brilliant and very well suited to the caliber and velocity of the 6.5x47 Lapua. I hand load all my own ammunition, and at this stage Lapua is the only one making brass for the caliber, which in my books is fine. I only use 120gn Nosler Ballistics tips with this cartridge, and have it loaded for about 2800fps, absolutely devastating on Kangaroos out to the 500-600yds barrier. I also use Harris bi-pods, as they seem to be one of the strongest in my view.

Once I pass the realm of the 500 yds I usually switch to the heavy barrel Rem. 700 VSF in 308 win. Though the 6.5 holds it own and would probably outperform the 308 at these distances, I had already had the 308 set up, so this is why I left the 308 as my primary 500yds+ rifle. The rifle, as I said earlier, has a Mil-Dot reticule which gives me more flexibility with the ballistics program I use on my PDA.

I purchased an ipaq 112 classic for my PDA (personal digital assistant), and currently use a Precision Shooters Workbench ballistics program, as it has a smaller ballistics program designed for the a PDA called the FFS (field firing solution) attached to it when you purchase the main desktop computer version. I have found this program to be excellent and very accurate in the field, and suits my needs to a tee. In conjunction with the PDA, I use a portable weather station for my atmospheric data, being a Kestrel 3500 series, which also performs well in the field, and has given excellent results working with the ballistics program. I am fussy with my bullets and tend to stick with one weight and brand after I find which one the rifle I am using likes. In the case of the 308, I only use 165gn Nosler Ballistic Tops, which have a great BC and weight for the distances and the animal (kangaroos) I am targeting. Velocity is usually around the 2660fps.

Kangaroos are a very well built animal with extremely strong legs and very thick set tail, which can become very dangerous if approaching a wounded animal. Hit in the right place, usually the chest area results in quick kills as they are soft skinned. Drop the bullet a little low, and they are extremely hard to kill, and become very irate and like any wounded animal become unpredictable, so one has to be very wary when approaching them. Our vast area in Australia makes it a great place for the long distance hunter, and with the right equipment and well set up rifle, it can be a very interesting day's shooting.