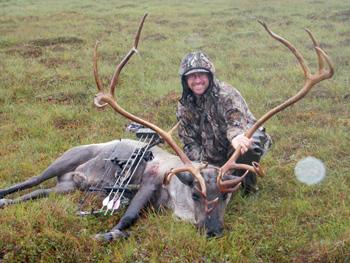 The bulls were spread out 50 yards wide feeding directly toward me. Craig and I had been trying to get close enough for a shot for 6 days so I knew most of the antlers by heart. The younger caribou with the spiky tops were to the left. Several nice bulls were in the middle. The big guy, the one we called Whitey because of his very whitetail looking tops, was to my right. I was just waiting for one of the big guys to get into range and present me an open shot. I was well hidden behind a clump of ferns and I anxiously ranged them every few minutes. 105 yards, 95 yards, 85 yards, they kept on coming. This same plan had blown up a couple times this week with the bulls suddenly changing directions so I tried not to get too excited. This time, however, it looked like it might all come together. At 58 yards, Whitey presented me with a broadside shot. I looked hard and even started to raise my bow, but it was just a little too far for me with the bulls still advancing. This was the last day I could realistically kill a caribou and still pack him back to camp in time for our flight out. I had to make it count.

I might need to start this story with a quick disclaimer: I’ve never had a more successful hunt. Of course, I’ve also never been able to kill three animals on one trip. I’m an active duty Air Force guy who has never lived outside the lower 48. I’ve had good success on elk, whitetails, mulies and lots of small game, but never made it to any exotic destinations. When Craig, a hunting buddy from Utah, called me last fall with an invite to Kodiak Island I wanted to go very badly. He had heard about some caribou on the island plus he wanted to see if he could get a bigger blacktail. I would love to get a blacktail or two. Caribou would be a bonus. My primary problem was I was on a budget. I had just moved to northern Virginia, a very high cost of living area. Craig said the trip would be about $3000. I thought about it and talked to my wonderful wife. She said I should do it, so the trip planning began.

Craig reserved our flyout dates to the bush and put down a deposit. That took care of the last leg of our trip. The commercial airline tickets to get me to Kodiak cost another $1000. Just a side-note, but flying from D.C. to L.A to Seattle to Anchorage is a brutal day. I don’t remember how much money I saved with the extra stop, but it wasn’t enough. The weather had some rest in mind for us, however. Kodiak happened to have its primary runway under construction. That meant planes had to land north or south. The weather was typical Alaska with drizzling rain and fog. Our Alaska Airlines flight into Kodiak the next morning was weather cancelled. We were on standby the following morning and on a confirmed flight that afternoon. We found out the next day the confirmed flight was on an Era prop airplane instead of a 737 so we had a good chance of making it to Kodiak. Craig happened to have an Air Force friend in Anchorage so our delay day turned into television, barbequed pork chops and a comfortable night in his spare bedroom. I was feeling pretty good the next morning.

Like we hoped, the next day our flight made it to Kodiak. The airport at Kodiak is quite charming. It’s about the size of the main level of my house and half the residents were carrying fishing poles. My kind of place. Our transporter picked us up and took us to the airplane docks. We were scheduled for a flight to the south end of the Island that afternoon. We unpacked the boxes we had mailed a few weeks earlier and got everything ready to go. To the credit of the U.S. post office, everything had made it okay. We left our travel clothes and anything we wouldn’t need in Kodiak. The float plane took off and wound through the valleys, keeping under the layer of clouds. We spent some time flying around different areas looking for caribou, but didn’t spot any. There seemed to be quite a few deer around and the pilot recommended a destination that had produced well in the past. In a few minutes we were landing on a remote lake on southern Kodiak. We had the tents set up by the time the pilot left. We only had an hour or so till sunset so we set up the bear fence, threw the gear in the spare tent and got ready for bed. I might also mention here that the caribou on Kodiak are actually escaped reindeer that were brought to the island sometime in the past. I think the genetics are the same and the record books treat them as caribou regardless. The biologist at the Fish and Game office said there were only 250 on the island, so they could be hard to find.

The next morning, sunrise was at 6:30 and my alarm went off promptly at 6:00. We were both fresh and excited to get out, but as usual on the first day of the hunt it took a while to get our gear together. Craig and I started climbing the large ridge behind camp to look for deer and glass the lowlands for caribou. We spotted several deer working their way up the left side before we even reached the base of the ridge. Two were small two-points, but the third was a decent 3-point with good mass. I even removed the spotting scope to get a better look at him. It was a little early to start chasing anything yet, but I made a mental note that he was good enough for my first blacktail if I can get a shot at him. I had ready every article online I could find about Kodiak blacktails so I had a pretty good idea what a good buck looked like.

We had to go through some shoulder high brush at the base of the hills, pretty standard Kodiak Island cover from what I had read, but the real obstacle was the waist high grass and foliage growing most of the way up the mountain. Not only did it make slipping easy, but it was wet. My pants got soaked almost to my crotch pretty quickly. My Gore-tex boots and socks stayed dry for a while, but were also wet by the time we got to the top. Craig had high quality KUIU gear with gaiters so he fared better than I did. We survived, but I made a note to research ways to stay dry (or at least dry out quickly) when I got home.

Once on top, we sat to glass the miles of country. We spotted handfuls of deer in every direction. I pulled out my spotting scope to see if any were worth chasing. Most turned out to be two points or maybe small 3 points. There was one good looking buck about a mile and a half away that was wide and tall. I couldn't count points from that far, but he could be a 4 point. The does seemed to be towards the bottom of the hills while the bucks were near the top. Once we ran out of deer to check, we moved down the ridge a half mile or so and did it all over again.

An hour or two into the morning we swung around a corner of the ridge where we could see the other face and some new river bottom. I hadn't glassed 5 minutes when I spotted the caribou. It looked like 20 or 30 animals bedded a couple miles away near a bend in the creek. We quickly got out the spotting scope and could tell there were some nice bulls in the bunch. Since deer seemed plentiful and caribou scarce, we bailed off the hill and headed toward the bottom. That was my first time walking on tundra. The mogul-like areas weren't too bad as long as you didn't misstep and drop into one of the holes. I didn't care for the sections that felt like a vegetation waterbed sloshing under my feet. We picked our way along until we hit the creek. It was a lot bigger than it looked from above. There was no way we were jumping over it. We worked our way along the edge toward the caribou looking for a place to cross. About a half mile down we ran into a beaver pond that gave us a couple foot gap in only inches of water.

We had the wind in our favor so we picked our way across the flat, trying to keep some cover between us and the animals. We had to rely on the roll of the ground since brush was pretty scarce and crawling was a really wet option. The caribou didn't seem too alert though and we closed to within a couple hundred yards without being noticed. Now the hard part began since they were feeding on open tundra and our preferred range was somewhere around 50 yards. We watched the herd quite a while to see if we could anticipate their movements. It certainly looked random. Sometimes they would wander left or right for a while. Sometimes they would bed down and rest. Sometimes they would just stand in a bunch and hang their heads like they were in some stupor. All in all, I described it to Craig like a group of pigeons--pretty hard to predict.

We picked out a decent route that had some cover along small creeks and would cut the distance and headed out. We cut the distance in half when the wind shifted. Most of the caribou stuck their noses up into the wind and bunched together. Then they acted like we were a brown bear or some similar threat. They stayed downwind where they could smell us and increased the distance to a couple hundred yards. They never did really run. It wouldn't present much of a challenge for a rifle hunter, but it was pretty effective against us with our sticks and strings. We played cat and mouse with them for most of the day, but they seemed alert that we were around and we never could close the distance. We didn't want to run them off so we eventually backed off and vowed to try again after we rested them a day.
Even though the sun didn't set until almost 10:30 we headed back to camp late that afternoon. I had definitely had enough fun for the first day. I was soaked from walking through wet grass and tundra, my legs were feeling a little beat up, my ankles were complaining about the lack of good footing and my stomach wasn't happy that I hadn't eaten anything but jerky and power bars since breakfast. A couple hours later we were drying our feet and eating Mountain House dinners. Pretty good first day if you ask me.
Next page: Kodiak Island Blacktail/Caribou >