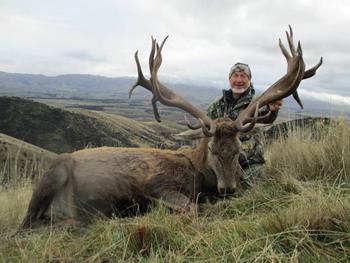 Hunting red stag in New Zealand has always been on my bucket list. Recently I was looking at my emails and saw an auction hunt on the GSCO (Grand Slam Club Ovis) website. It was for a free-range Tahr hunt offered by Carla Lucas and New Zealand Trophy Hunting. I was fortunate to win the bid and my dream of hunting in New Zealand was starting to be realized.

I had recently purchased a Sako Carbon Extreme rifle in the .308 caliber. I paid a visit to my friend Andy Backus at the Long Range Hunting Store in Oshkosh and he helped me choose a Vortex Viper 4-16 scope. I found that the gun was most accurate with Hornady precision hunter ammunition with the new ELD-X bullet. After obtaining range data I ordered a custom turret from Kenton Industries. Range practice confirmed it was right on.

I left Appleton, Wisconsin on Sunday afternoon, June 18, with connections through O’Hare and LAX. With the flight time and the date change, I arrived in Auckland (on the north island) early in the morning of Tuesday, June 20.

About a month before the trip I had filled out the online application for a visitor’s gun permit. I collected my gun case and suitcase and then went to the police office, where an officer inspected my gun and gave me my permit. Permit cost was $25 and had to be in New Zealand currency, which by the way is quite beautiful.

My next flight took me to Queenstown (on the south island), where I was met by Carla Lucas, who drove me an hour and a half north to the town of Wanaka. It was early winter in New Zealand. On the way we stopped at a local tourist attraction - bras hanging on a fence as far as you could see, with a sign for breast cancer awareness.

Wanaka reminded me of Aspen, Colorado. Nestled on the shores of Wanaka Lake at the foot of the mountains, it is where tourists go to ski at this time of the year. My first two nights were at the Edgewater Resort near the southwest end of the lake. The people were all extremely friendly. There were many restaurants to choose from, with excellent food. The people in New Zealand all seemed to be in great physical condition. They pride themselves on being healthy and physically active.

That evening I was visited by my guide, Cam, who explained how the next morning’s hunt would be conducted. I had envisioned a helicopter ride to some mountaintop where we would set up a base camp and hunt. Instead, Cam explained how he and the helicopter pilot would locate a quality animal and set us down without actually landing. We would bail out of the helicopter, which would then take off, and we would be left to stalk the animal.

The hunt started on Wednesday, June 21. Conditions were quite windy and the helicopter ride resembled a roller coaster ride. For the first time in my life, I got airsick. Each time we spotted a Tahr, Cam would carefully look to see if it was a quality trophy. The third one we came across was what he was looking for. The helicopter set us down and we bailed out. That Tahr would not cooperate and I could not clearly locate it in the scope before it went over the next ridge.

I placed the crosshairs on its shoulder, but decided to dial up the magnification for a more accurate shot. The chamois took off. Conditions were worsening so we decided not to continue and our helicopter headed back on a very turbulent flight. The pilot later admitted that we probably should not have flown that day. 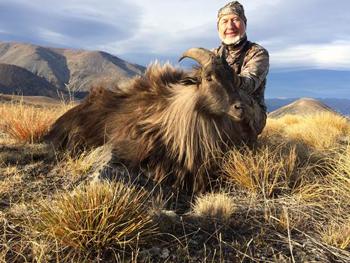 The next day, Thursday June 22, Cam picked me up at the Edgewater Resort and we drove through rain north to Omarama. We spent a few hours in a motel waiting for the rain to stop, and when it cleared we went out and hiked for free range red stag. The terrain was more hospitable. It wasn’t long before we spotted our quarry. They were bigger than I had been told to expect.

New Zealand exports 85% of the world’s restaurant red stag. They are shot from helicopters and the larger ones are preferred because the hunters are paid by the pound. I had decided that I was not going to hunt in a high-fenced area and was ecstatic to see such quality animals in the free range.