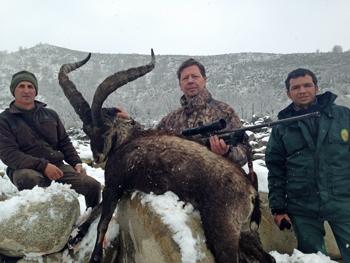 A couple of weeks ago while hunting Barbary sheep in Spain with Iberhunting, a full service outfitter, I met the owner, Antonio Teruel, and we quickly became good friends. When it was time for me to return to Sweden, where besides my regular job I also run a small hunting lodge, primarily for wild boar with eight blinds and baited areas, Antonio mentioned he had received a cancellation to a hunt for Gredos Ibex scheduled for April 26-30. He asked if I was interested. I would only have to pay 2/3 of the price, since this was the third time this hunter had cancelled and he would now lose his deposit. After pondering the pros and cons, I regretfully had to decline his offer. I had my own company to run, dogs that had to be taken care of, and besides I already had three hunters scheduled for a wild boar hunt on that weekend.

As fate would have it, my brother had taken a few vacation days during this time, and he offered to take care of the dogs. I called Antonio in Spain and asked if we could possibly move the dates from April 26 to April 28? That was OK with Antonio. Next I called the three hunters who were booked for a wild boar hunt with me and asked if they minded me taking off Sunday night, and luckily, they did not object. Now things were starting to fall into place. I quickly arranged for tickets, and soon I was sitting in Copenhagen Airport waiting for my flight to Madrid.

As I mentioned at the beginning, this was a hunt I initially had to decline because of previously arranged schedules and time constraints, but with lots of help and cooperation from everybody, I now sit here one day later, at 10:31am Monday morning, and I have just shot a trophy Gredos Ibex.

This is how the hunt unfolded.

Sunday April 28, I land in Madrid where Antonio picks me up. Spring has not yet arrived here, and he tells me we can expect a snowstorm overnight. The drive to Gredos, Southwest of Madrid takes roughly two hours through the beautiful La Sierra de Gredos mountain range with snow capped peaks reaching 6000 feet.

After getting settled at the hotel, I am invited to a six course lunch at a Michelin restaurant, which I do not think possible to find in such a small town with a population of only 400 people. The food and service is superb.

After a well deserved rest, it is time for dinner at the hotel, which incidentally also sports a Michelin restaurant. Two Michelin restaurants in this little town? I am astonished. After another six course dinner with all the accompanying trimmings and wine, it is time for some more sleep. The room I have been assigned comes with a large double bed, and I ask my host in jest if he has arranged additional benefits for me, but alas, I get to sleep alone.

Next page: Ibex Hunting In Spain >