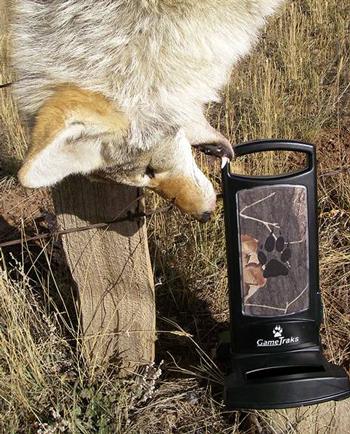 In the competitive world of electronic game callers (e-callers) it takes quite an edge to stand out from the rest. In this day and age there are at least a half a dozen or more top quality high-end electronic callers. So what can a relatively new company offer to help them rise above the competition? Perhaps adding one or two industry firsts, or setting the goal even higher and adding at least 10 new industry firsts. That might work for many of today’s leading edge e-caller companies, but if your name is Ron Dir and you are trying to design a standout e-caller those numbers just won’t do. Ron designed the Game Traks e-caller with 17 industry firsts. That’s right folks 17; that was not a typo. When one considers just how amazing today’s e-callers are, adding 17 industry firsts is nearly mind boggling.

For those of us that avidly hunt predators, coyotes in particular in my case, it seems we are always looking for the latest wonder call. Whether it is a hand call, or an e-caller, there is an insatiable drive to find the best. Then again, the same can be said for long range hunters and their rifles, scopes, range finders, etc. The good stuff out there just seems to attract attention to itself. So it was with me and the Game Traks caller. I had heard about the caller here and there. I saw a few advertisements in various magazines as well. What really got my attention though were how many people that I respected as predator hunters were talking about the Game Traks caller. Hunters from Arizona to Montana, and from California to the east coast were posting photographs of their success with Game Traks. I may not be a genius but it didn’t take me very long to figure out there must be something to this different looking e-caller.

Unlike many of the other e-callers on the market that look like little megaphones or remodeled flashlights, the Game Traks is an upright standing caller best described as a tower. To the best of my knowledge there isn’t another e-caller on the market that looks anything like it. In talking with Ron Dir on the phone he explained his goal was to have “Bose Wave” quality of sound in an e-caller. To help Ron achieve this goal he went with the upright tower style 50 watt speaker.

Besides the amazingly clear sound that emits from the speaker, the truly amazing feature is that it broadcasts that sound over nearly a 360 degree area. It is literally a surround sound system for predator hunting. If that is not enough, one can purchase additional speakers (up to 6 different speakers) and control them all from one transmitter. On top of that, each speaker can play a different sound and all this from one transmitter!

Imagine for a moment a quiet calm morning. Suddenly the silence is broken with the cry of a red tailed hawk. A few seconds later the howl of a lonely coyote. Pause a minute or two and the morning erupts with the painful cries of a jack rabbit in distress. Then, as the rabbit screams in agony, a flock of magpies chime in with a raucous chorus. The entire cacophony of sound is emitting from slightly different locations as it would occur in nature. Seriously, what predator could resist taking a peek?

This would work really well for crow or goose hunters that want to spread the sounds out across their decoys. I can also see this working really well for a turkey hunter in Texas that wants to create the illusion of a flock of hens and possibly a jake or two moving in to breed with the hens. Actually the scenarios would only be limited to one’s imagination. To the best of my knowledge no other e-call company has the capability to create sounds from multiple directions to the level that the Game Traks system can do it. In a nutshell, it’s pretty dang cool!

Now, one might wonder how you could set something like this up without disturbing the area. Again, here Game Traks shines with more progressive thinking. The speakers have been designed with what Game Traks refers to as a Smart Hibernate Feature. This means the hunter can place all the speakers out the evening or night before the hunt and leave the area. In the morning the hunter just has to sneak into position and “wake up” the speakers with his remote transmitter. Imagine the possibilities this could have for a long range hunter. With a line of sight speaker range of up to a half a mile it just keeps getting better.

A long range hunter could set up on a bluff or a cliff overlooking a valley, a flat, or a meadow however many yards away one chooses, up to a half a mile. As long as they had a direct line of sight to the speakers with the remote, they could activate the speakers. One could snipe coyotes, foxes, or crows from great distances. Perhaps even far enough away that the targeted animal would have no clue you are even in its same zip code.

Funny little story about that hibernate mode: During the testing period, I had forgotten that I had put the speaker on hibernate. I left the speaker in my bedroom and had gone down stairs to the opposite end of the house to sit on my couch, by the fireplace, to set up my transmitter for the next day’s hunt. I was happily sitting there selecting sounds and pre-selecting volumes when, all of a sudden, one of my daughters came running down the stairs with a panicked look on her face. She exclaimed: “Dad there are all kinds of terrible sounds coming out of your bedroom!”

I finally realized that the transmitter had awakened the speaker and was transmitting right through the floor and to the opposite end of the house. That speaks pretty highly of how effective the transmitter is, not to mention that hibernate mode does indeed work. I can only imagine what my little girl was thinking as she heard dying rabbit screams, coyote pup distress screams, and barking/growling coyotes sounds coming from my bedroom.

Regarding trying to set up the transmitter for the next day’s hunt as was mentioned in the above story, that brings to light another really cool feature of this calling unit. With the transmitter one can set up for hunt in a particular area before entering the field. One can select up to six different sounds per hunt, along with preset volume and preset time duration for each sound. One can preset up to 18 different hunts with up to six sounds per hunt. That is really amazing and very easy to do. I wish more e-callers had this type of feature.

The Game Traks has so many new and well thought out features that one might feel a little intimidated by it all, wondering if you have the techno-intelligence to operate such a caller. Trust me; if I can do it, anyone can do it. The steps and procedures are relatively easy to follow and after one gets the hang of it, it all becomes second nature. Besides, if one can’t figure something out, (and I did get stumped a time or two, but not too bad) the Game Traks staff will help out in any way they can. In fact, I found most of the Game Traks staff to be exceptionally professional and helpful. This is great news for someone that is as technology handicapped as I often feel.

There are a number of other features the Game Traks system offers--too many to fit into one article. I would highly recommend going to their website to read more about all that this electronic caller has to offer: gametraks.com. Just a couple more items I wish to mention. The remote transmitter is larger than most and feels very good in one’s hands. It is well designed and easy to operate. It has raised buttons, and both the screen and buttons are backlit in red for use at night. Both the handheld remote and the speaker use rechargeable titanium lithium ion batteries.

With the caller I was using, I would put it on the charger before going to bed at night, and the caller worked continuously all day long the following day. It never did die on me when using this method. In fact I’m not sure just how long the charged batteries will last after an overnight charge, but at the very least, all the next day. I used the caller in cool weather, cold weather, and really cold (-25 degrees) and it worked fine. All these neat industry firsts might be fine and dandy, but one might wonder does the caller actually call in animals. I will let the photographs with this article speak for themselves. The caller does indeed call in critters!

As can easily be seen, this caller has a lot going for it. As far as any improvements go, I only had one small thing I would like to see improved. The on/off button on the speaker can sometimes be difficult to operate especially with really cold fingers. (This, in my case, is most of the time while hunting coyotes). I would like to see that changed into an actual on/off switch rather than a small button. Other than that there is very little not to like about this caller.

Game Traks has a large library of sounds to choose from when purchasing the caller, plus it is programmable. You can add your own Wave, MP3, or .GTS sounds with a USB cable to your computer. Included with everything else is a 5 year warranty. If one is looking for a new electronic caller amid the vast array of callers out there, the Game Traks should be given considerable consideration. It can do things that no other callers on the market can do, and should have appeal especially to long range hunters. For additional information see below: