While it is easy for most people to understand the importance of proper fitting of shotguns, there is a common misconception that scoped rifles do not require the same attention to detail concerning fitting the rifle to the shooter. Proper fitting of the precision rifle is every bit as important to the long range guy as fitting the shotgun is to the sporting clays or field shooter.

Every aspect of precision rifle shooting, and in particular long range, is about repeatability. A lot of people don’t realize they have a fitting or repeatability issue. Let us take my favorite guy Andy the Average Shooter (or Andy for short). Now, Andy has acquired a 338 WC (way cool) and the appropriate target knobbed optic. Andy goes to the range all summer long working on loads, shoots lots of groups, develops spot on drop figures out to 1000 yards and is quite confident in his abilities and his rifle’s abilities. Hunting season rolls around, and our hero (Andy) is set up in a great long range ambush position. He has it all laid out: a great prone position, rear bag, all tools laid out for close access, and all atmospheric data is entered into the PDA. Life is good. The conditions are nearly perfect. Andy is quite confident that anything within his range limit of 1000 yards is good to go. Shortly after daylight Andy spots a really nice whitetail buck feeding at 992 yards. Andy calmly dials the elevation knob up 24.25 MOA and leaves the windage where it is because there is no wind. The buck is in a nearly perfect feeding position, ever so slightly quartering away. Andy centers the crosshairs on the off shoulder and the centerline of the body for elevation. This is absolutely perfect. Andy savors the moment for a few seconds and applies pressure until the 1 lb trigger cleanly breaks. Andy’s rifle barely moves because of the muzzlebrake and he picks up the tail end of the trace dropping in on the buck. The trace is perfect for windage and appears to be dropping right into the X-ring. The bullet impacts, much to Andy’s horror, 4-5 inches under the buck’s belly, just barely missing the offside leg, and showers the buck with dirt, rocks and grass. Well, even a buck in full rut understands that now is the time to be in a different zip code as disappears.

What happened to Andy is a mystery to him and everyone he tells the story to. What has happened is quite simple and unfortunately quite common. Andy has suffered from “*** glued to the benchrest syndrome.” Andy has had some rifle fitting issues and never even knew it. Here is what happened to Andy: he spent all of his time on a benchrest shooting. He shot well from the bench, producing consistent groups and drops. Now it never occurred to Andy that his rifle lacked the proper length of pull and cheek weld. Shooting off the bench Andy had gotten in the habit of shooting with a certain feel to the rifle and was able to produce some good shooting, even though the rifle lacked proper fit. Now, when Andy went to the field and went prone instead of shooting from a bench as he was used to, it changed his line of sight placement through the scope. Even though the scope showed no “shadowing” and was clear, he was now looking through a lower portion of the scope than when he shot on the bench. Most people shooting a rifle with lack of cheek weld will tilt the head forward when going prone, causing them to look through a lower line in the scope. This causes the impact to be lower. In Andy’s case at 1000 yards or so this is a big deal.

Look at the two groups below both shot with the same rifle. The one on the left is a regular group shot with proper rifle fit. The group on the right is shot with no cheek weld, shooting one shot each with the line of sight through the top, bottom, left and right of the scope but still with a full, clear, no shadow sight picture. 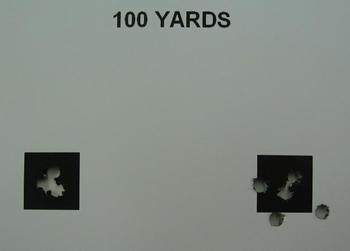 You can see in the groups simply having a clear, no shadow sight picture is not good enough for the long range hunter. Shooting field positions and especially odd field positions will really amplify the effects of poor rifle fit.
Next >
Reactions: corsair4360