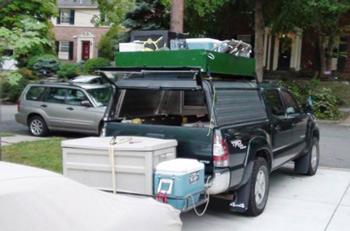 I decided that I would like to try bow hunting elk, being as I had never done that, and to add to the challenge I wanted to make a kill beyond 100 yards. So I purchased a new bow and for a year and a half I had practiced to regain old skills and learn about new archery gear. The bow is a 70# PSE X-Force Long Draw in left hand with a drop away rest and seven pin sight. The sight was set so that 20 yards was at the inside top of the housing and a fiber optic thread was taped to the bottom outside of the housing and was found to be correct for 115 yards. A home made stabilizer is used. Arrows are ACC 3-71s which are overspined for the bow and NAP 125 gr Thunderheads. While I lose some speed and trajectory I carry a lot of weight downrange. Arrows are carried in a hip quiver. By the time I was ready to leave for hunting I felt I was reasonably proficient to 80 yards but that beyond that my skill was lacking.

I drew an archery deer tag in Utah and bought an over the counter spike elk tag which allows one to shoot either a spike elk or cow/calf. The two seasons run concurrently so even though I was not too interested in deer hunting, I was wiling to shoot one if the opportunity presented itself. About a week before the season opened I packed up the truck with all of my gear and headed to Utah.

In the category of what was it that you didn’t know about archery elk season in Utah, is that it begins the last weekend before school opens. Friday night before the season opened was like downtown New York City during rush hour. Just nonstop pickups with horse trailers, house trailers or ATV trailers or dirt bike trailers. And everyone who got there before dark had to ride their ATV down each and every trail where there might be an elk herd. So by Saturday morning any elk with any sense had been pushed off the mountain top meadows and down into the canyon bottom timber. All day Saturday and into early afternoon Sunday there was nothing but the drone of ATVs and dirt bikes up and down the roads and trails. On Tuesday evening the elk began to come back out into the meadows and I saw the spike/cow/calf combination. By Thursday, the larger herds had began to come to the meadows again and I was seeing plenty of elk but they were always in a different meadow on a different ridge. It began to seem like a game of random chance where sooner or later me and the elk would wind up in the same meadow at the same time. The weekend rolled around but the crowds of people did not reappear so things were relatively quiet. Saturday, I saw some elk but could not close on them before they left the meadow. Sunday morning I spotted the spike/cow/calf group on the next ridge over and decided to watch them to see where they would bed down. After about an hour they headed over the ridge into a stand of large pines and disappeared. I then went back to camp and got my gear sorted out for stealth.

About 10:00 that morning I started easing down the ridge line looking for the elk. Very slow, tedious work moving along quietly, quartering back and forth across the ridge looking for bedded down elk. Right at 11:00, I entered the stand of pines and immediately one elk spooked and went down the hill but I could not tell which one it was. I stood very still and looked around for a few minutes being as there were still two elk unaccounted for. Finally, I spotted two eyes and a nose looking right at me. I eased out the LRF and it read 43 yards on the vegetation surrounding the eyes and nose. I could not tell if it had spikes or not but it didn’t matter being as any elk except branched was legal. After about 15 minutes of standing there the elk head disappeared headed downhill. I eased downhill about three steps and tree limbs obscured my vision so I squatted down to get a line of sight underneath them. The elk I had been staring down was there with its body open for a clear shot but its head obscured but I could see enough to know it was not the spike but either the cow or calf. There was not anyplace to move to so the shot had to be made from where I was. Instead of shifting my feet to get into a knelling position I opted to draw the bow from squatting. Somehow I managed to break the 70# smoothly without jarring he arrow off the rest and got the 40 yard pin centered in the peep a few inches behind the elks shoulder. I thumbed the release and felt the string slap the arm guard and knew I had goofed the shot by some amount. From the sound of the hit and the elk’s reaction it was clear that the arrow was fairly well placed even with the string slap. The elk on impact turned 90 degrees away and went off siidehilling. “Well placed” and “fairly well placed” are two different things when it comes to arrows in big game.

So after things quieted down, I went over to the place the elk was standing and there was a lot of blood so I began trailing the blood. After about a quarter of a mile I jumped the elk from a bed and it was clearly the calf but I have no shot. This goes on for about another 200 yards and I jump it again and still no shot but it is weak from loss of blood and does not go far before bedding again. About the third time it is too weak to run anymore I can move laterally to get enough of an angle to get another arrow into it. In the end I used my knife to finish it.

The elk had been hit in the liver behind the diaphragm and had really bleed a lot. Fortunately the elk had never gone downhill but had sidehilled all the time so it was only a 20 minute walk to Skyline drive and the truck. I boned it out in place and packed it out and on ice by that evening.

While I did not make a spectacularly long range shot on an elk, I was pleased that my first archery elk hunt was successful and that I was able to get within bow range of bedded elk. There is always next year for a long range shot.