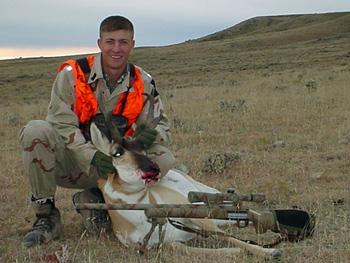 “Don’t [email protected]$&!#% move!” I yelled in a whisper to my dad as the antelope doe stared at us from about 75 yards away. We had just crested over a slight rise and my dad was scanning up the draw to our right as we came over. Antelope in this terrain seem to be able to hide in the gentlest of depressions and the antelope directly in front of us were no exception. The herd numbered around 20 and thankfully it was very early in the morning, opening day of antelope season in Montana. The antelope were not yet as skittish as they would be by the end of the day. As my father and I crested the slight rise that hid the herd we had come over at the perfect moment, while they all had their heads down feeding.

My father was just two long paces in front of me as we slowly walked in the ever increasing light of the cool but still morning. I was the only one with a tag. My father was along for the enjoyment. I had returned from Afghanistan nearly a year prior and this was the first hunt my dad and I had gone on together.

We arrived at the Fort Peck area the day prior to opening day and spent our time driving around to various vantage points getting acquainted with the area and scouting for potential antelope herds. We had found a couple herds with bucks that looked promising, but we kept seeing nice herds in one particular area that we eventually decided to check out in the morning.

After a day of driving around gravel roads and glassing the desert prairie terrain we set up camp not far off the main road and got a fire started to cook our supper. For some reason my father had brought along the highly disregarded (at least by me) Manwich sloppy joe mix and buns. I had actually requested something much different but he had decided to give the ol’ Manwich another try. We both concluded it still needed improvement, at least to our taste buds. We still needed to eat though so we just mutually complained a lot and had some good laughs. Rain set in for a brief moment that evening which didn’t bother us at all. Our tent worked just fine at keeping the rain on the outside.

Morning came early as our alarm clock went off, indicating it was time to brave the cold morning and get ready to hunt. I never have enjoyed slithering out of my sleeping bag on a cold morning. The chilly air just encourages me to get my clothes on quickly and get moving to warm up. This morning was no different as it was October in MT and the temps had been dropping substantially through the night for a while now. These temps are perfect though for hunting and I was eager to get started.

I had already staged my rifle, blaze orange, backpack, and binocular in the truck. As we ate a quick breakfast of toaster pastries and soda pop I checked my gear another time and made sure I had everything. We had a short drive to where we would begin our hike that morning, so we got going before it had even started to get light out. We wanted to be in position well before daylight so we factored in extra time for the hike. Our hike to our set up location was uneventful and we were just setting up as the light was getting good enough to see about 50 yards. After that point, daylight seemed to come pretty fast and we could see further by the minute.

Well into shooting light which occurs 30 minutes prior to sunrise, we saw absolutely no antelope at all. We had set up just below a ridge that overlooked a massive valley. We stayed in position for a short while, diligently picking apart every aspect of the terrain we could see through our binoculars. We were out of luck. The decision was made to get up and slowly work our way along the bottom edge of the ridge, just up from the valley floor. As we slowly worked our way forward we continued to keep our peelers open, as my wife would say. My father walked just in front of me, eager to find the antelope we knew were around here somewhere. This area is perfect for antelope whose eyesight is commonly compared to humans looking through eight power binoculars. In this terrain, they have the advantage as there is very little vegetation, and they can see predators coming from literally miles away.

“There they are!” I thought to myself as I lunged forward to grab my father by the shoulder. As soon as I had a handful of his jacket I pulled him down as I also kneeled by his left side. At that very moment a doe raised her head and stared directly at us. My father had been looking too far up the draw toward the high ground while the antelope had been hidden in a slight depression closer to the valley bottom. As my father and I stared at the doe, she stared back at us. My father began slowly stretching forward into a prone position. “Don’t move” I calmly said in a quiet whisper just barely loud enough for him to hear. He continued his forward progress into the prone. “Don’t [email protected]$&!#% move” I yelled in a slightly louder whisper. This was not exactly the way my father is used to his youngest son talking to him. But he stopped, and I calmed down. My father was now on his hands and knees facing to my right, and half of the antelope herd was now acutely aware of our presence.

I hadn’t even realized it, but I had deployed the bipod legs on my rifle and set it on the ground in front of me as I had kneeled next to my father, cussing at him. My eyes slowly glanced downward at my rifle sitting right in front of me, scope caps still in place and an empty chamber. The barrel was pointing to my left, well away from where my father now remained motionless. I adjusted my stare back to the antelope who were now starting to mill nervously about, not quite sure what to make of our presence. My right hand gracefully moved downward and touched the top elevation turret of my scope. I slowly moved my hand forward and quietly opened the objective scope cap then rotated my hand down under the stock. As I kept my hand in contact with the stock surface I moved my hand rearward until I felt the trigger guard, then deliberately moved upward and quietly worked the bolt of the Remington M700 long action. As I pushed the bolt forward, the rattle of the round seemed to echo as it popped free of the internal magazine, but the antelope remained where they were. After chambering the round, my hand slowly crept over the top of the bolt handle and my thumb moved the safety rearward, engaging the safety. The antelope were now starting to move further down toward the valley, keeping a watchful eye on the strange objects that made them nervous. My rifle was ready though and all I needed to do was point the rifle in the direction of my target and my eye would find my prey in the scope without effort.

The skittish antelope finally had enough and started a half concerned trot away from their current location, but further into the open area. As soon as I noticed this behavior I quickly told my father to lie down. As he did that I also assumed a prone position and I informed him that I was going to put the bipod against his leg and the barrel would be over the top of his calves. There was enough barrel length that I wasn’t concerned as the muzzle would be clear of his legs. This only took a couple seconds and I quickly spotted a nice buck in the herd that I hadn’t noticed earlier. As I suspected, the antelope only ran a short distance and turned slightly to check behind themselves. As the buck came to a stop, he turned his entire body slightly to his left and looked back mostly with his head and in doing so gave me a nice enough quartering away shot at about 200 yards. I often daydream of hunting and had envisioned this exact scenario several times. The mil-dot crosshairs of my Leupold 3.5-10X40 scope came to a steady rest a moment later creating a straight line through the bucks left side to his right front shoulder. My thumb instinctually pushed the safety forward making the rifle ready to fire.

The very first crack of rifle fire erupted from that valley less than an hour into antelope season. My 190 grain 30 caliber bullet impacted the buck a fraction of a second later and he collapsed immediately, not even taking a step forward. The whole encounter after first spotting the antelope took probably less than two minutes, but provided my father and I many memories each time we recount how I cussed at him while antelope stared at us. That antelope season ended quickly for me, but is the most cherished hunt I have been on. Spending time with my father driving the back roads, glassing beautiful terrain and animals, huddling in a tent eating Manwich while it rained outside and spending a brisk morning hunting antelope provided memories that will last a lifetime.

Nicholas Gebhardt has been an active hunter primarily pursuing mule deer, antelope, coyotes and prairie dogs since he was old enough to legally hunt. Nicholas is a precision rifle competitor and uses the knowledge he gains from competition shooting to aid in his ethical taking of game in the field under most any condition. He enjoys custom rifles and is usually in some form or another of either planning or building the next one. Nicholas earned his B.S. in Wildlife Biology from the University of Montana and is a Captain in the Montana National Guard.
Reactions: lyle2231