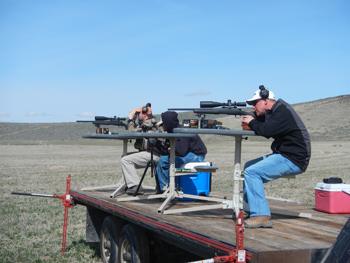 At the shot, we all erupted with shouts, high fives and knuckles. To my knowledge, no one had ever pulled this off for national television—a 1000+ yard shot on a football-sized varmint known as a rockchuck! We were ecstatic!

February of 2013 found No Off Season at the Pacific Northwest Sportsman's Show in Portland, Oregon. The PNWSS is billed as “The Largest Sportsman's Show West of the Mississippi”. Tens of thousands of people and their families attend this huge event each year. No Off Season was there again this year promoting our predator and varmint hunting gear and hunts. But, our neighbors had changed this year as Bob and Chris Beck of Extreme Outer Limits TV set up shop just across the aisle promoting their show and selling McMillan rifles and Nightforce scopes. No Off Season, in addition to predator gear, focuses on long range varmint shooting gear including McMillan rifle stocks, Jewell triggers and other items to help make long range shots on small targets a reality for our clients. No Off Season also specializes in high-volume varmint hunts for Beldings Ground Squirrels (locally known as “sagerats”) and long range rockchucks, a western cousin to the eastern woodchuck or groundhog. We mentioned the possibility of filming some long range rockchuck shooting and sagerat shooting to Bob. Before the show ended, Bob and his friend Chris Brooks of Kershaw Knives stopped by making plans to travel to Burns, Oregon to film an episode for Extreme Outer Limits TV.

Long range rockchucks are a passion of mine. I grew up reading Jim Carmichael’s articles about accurate rifles and varmint hunting. Jack O’Connor’s stories of sniping jackrabbits also fueled the fires. As big game tags became more and more difficult to draw, predators and varmints became more and more of our focus. After all, there are “No crowds, no limits, no seasons…no bad days.” A hunter can pursue varmints and predators on their own terms and their own schedule. Factory rifles eventually evolved with fast-twist barrels and high-powered glass sporting target turrets. “Long range” also evolved from a celebration over a hit at 285 yards to beginning our shoots at over 400 yards. Conservation came into play as well because the limited size of the rockchuck colonies in this area could be wiped out in one day as the equipment became more accurate and more effective. The success of our hunts began to be measured more by the distance of the shots than the number of animals taken. My son, Ben, displays his first 1000 yard rockchuck mount in the living room as proudly as any mature bull elk.

Why not just do some rock shooting? We actually love rock shooting but, well, it’s just not hunting. Live targets add several things to your practice that rock shooting can’t—actual glassing for game, a definitive kill-shot-or-miss and time pressure. Time is always of the essence. Live animals present targets then leave. The closer the hit, the more likely the leaving. Live target varmint shooting more closely emulates the scenarios of big game hunting as well as being challenging in and of itself. With these things in mind, we planned a hunt that would be both a challenge and realistic for an episode of Extreme Outer Limits TV.

The planning included finding a shootable population of rockchucks on private property to avoid public land issues. The spot also needed to provide over 1000 yards shots—not all places do. A friend allowed us the opportunity we needed to hunt his ranch out of Burns, Oregon. We loaded the optics, the portable benches and the Polaris Ranger and met Bob, Chris and Bob’s cameraman, Cole. With anticipation building, we headed out to the ranch.

Filming adds a dimension to the hunt that includes much extra time creating a show that “brings the viewer along” on the hunt. So by the time we actually got set up to shoot, the day’s breezes were already beginning to add to the challenge. Bob decided to start things off with a couple of McMillan Tactical Hunter rifles in .243 Winchester caliber. One of the rifles wore a Nightforce 8-32X and the other was topped with a Nightforce 3.5-15X scope. The breezes not only varied in intensity but shifted in direction actually moving from right-to-left then left-to-right and back again. Needless to say, it made the shooting pretty challenging since we started immediately shooting at over 1000 yards. Chris Brooks started the shooting as Bob used him as a guinea pig. The relatively small 87 grain Berger bullets proved difficult to remain consistent in the changing conditions and the 15X limitation of the scope made locating small targets with coloration similar to the surrounding rocks extremely challenging. Bob made the call to step up to the 6.5X284 topped with a 5.5-22X NF.
Next page: Extreme Shooting and Filming - 2 >