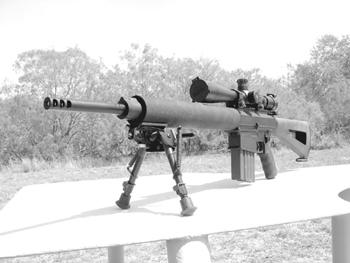 I recently evaluated an DPMS LR .260 AR. The rifle was well built, functioned flawlessly, and was superbly accurate, taking my bolt action sniper rifles to task. The rifle is relatively heavy, approximating 11 pounds. To meet the rising tide of hunters taking to the field with AR’s, Randy Luth downsized the .260 to a hunting version. For whitetails and similar sized soft-skinned animals, Randy has hit the mark.

The more than 3 pound difference between the LR-260 (rear) and the new LR-260L are the shorter, lighter barrel, carbon fiber handguard, and the skeletonized stock.


The popularity of the .260 is rising among competitors in several genres. The sleek 142 grain Sierra MatchKing and 139 grain Lapua Scenar bullets with ballistic coefficients near and above the .6 mark provide an edge to long range shooters. Premium hunting bullets now on the market can move downrange with much the same characteristics, or smaller bullets can provide increased velocity at shorter ranges.

The .260 Remington cartridge provides the shooter with mild recoil and relatively long barrel life. The shorter barrel in the .260 DPMS hunting version does sacrifice velocity, but it is not meant as a long-range rifle. For example, my sniper rifle with a 25" barrel pushes 139 to 142 grain bullets at 2870 fps. The .260 LR AR with a 24" barrel reduces that to about 2750. The hunter version with an 18" barrel slows the bullet to about 2550. For comparative purposes, all were shot and chronographed using the same load of 45.3 grains of H4831sc (a mild load) and 139 grain Lapua Scenar bullets. If one believes that only 1000 ft-lbs of energy is required for whitetail deer, the 260 Remington in the short barreled AR is good to 575 yards. And in the right hands, it performs admirably at long range. A friend, Andrew Smith, took the rifle to one of my 11" wide x 22" tall steel LaRue targets at 900 yards on a recent deer hunt, hitting it time after time until I stopped him. I had only 5 rounds left for the hunt. A few hours later we were both cleaning deer we had taken with the rifle.

Groups with the Hunter version ran about 1.2" with factory ammo. I tried my sniper rifle handloads and it did not like that either. While my sniper rifle load proved well tuned for the larger LR-260, I tried to increase the powder to tune the smaller rifle to get a bit more velocity, but going down hit the node I was looking for. Had DPMS sent two different rifles just like these, the opposite might have been true. It is a matter of barrel harmonics and several other factors. The rifles functioned flawlessly with all loads tested.


Reducing the .308 to 6.5 caliber lets the .260 cartridge fit standard .308 magazines and receivers. Thus one only need rebarrel their .308 bolt rifle to take advantage of the .260’s flatter trajectory (sniper competitors call it a wind cheater) and less recoil. The DPMS rifles shooting the .308 and 260 Remington size cartridges have a beefed up receiver. However, 6061-T6 aluminum has been used to further reduce weight.

The Hunter rifle was fitted with a Custom Miculek Compensator. This reduced recoil as well as allowed the rifle to be kept on target though recoil. As supplied, the carbon fiber stock has a quick release sling attachment. That was easily removed and a Harris bipod installed. Note that the barrel is free floated.


The .260 DPMS AR Hunter version has a carbon fiber hand-guard, shorter barrel, and a skeletonized stock, reducing weight from 11.3 pounds in the LR version to 7.9 pounds in the hunter. Factory ammo grouped in the 1 to 1.5 inch area, about the same as the .260 LR version did with factory ammo. I had tried my handloads that I use in my GA Precision sniper rifle in the LR version, and they shot around .4" for 5 round groups. Thinking that I might have the same luck with the .260 hunting version, I tried them in it as well. My luck ran out. They grouped better than the factory ammo, but a bit more tuning was in order. I spent a time trying different amounts of powder in an effort to tune the hunter. While the LR version liked 45.3 grains of H4831sc, same as the bolt rifle, I wanted a bit more velocity out of the hunter and so tried going up, looking for a node at a hotter powder load. I did not find it, so started going down. It was there that I found the load I was looking for. The first three shots were in the same hole with the 4th a bit to the left and the 5th a bit to the right. I loaded up more at that powder setting and the 260 Hunter hit its stride.

I gave the rifle a work out by shooting two magazines, 20 rounds each, as fast as I could acquire the target and then letting 3 other people shoot the rifle several more times. There were no malfunctions. The rifle stayed on target through recoil, allowing me to see hits. That is a highly important feature in a rifle in my opinion. The addition of a Miculek brake reduces recoil further as well as helps keep the rifle returning straight so the shooter can keep his eye on the target.

The Hunter is fitted with dust cover, forward assist, and a G27 Tactical Pistol Grip. I added a Leupold 3-10x tactical scope to evaluate the Hunter on the range. Yes, the rings are too short, but the only ones available at the time.


The 3.4 pound reduction in weight of the LR – 260L over the original LR – 260 makes it more easily carried. While velocity is reduced by going from a 24" barrel to an 18" barrel, its ability is still substantial at 300 yards. The table below uses a 139 grain Lapua Scenar bullet at standard conditions.

Again, Leupold was kind enough to lend their Vari-X III, 3.5-10x40mm LR with 1/4" click adjustments to the project. I only had one set of rings available for a Picatinny rail that were a bit short for an AR, but they sufficed for the test. This scope has target adjustment dials, which gave me the ability to dial for the longer shots and is equipped with side parallax adjustment.

The rifle came stock from DPMS and is fine as supplied. On my current AR’s, I have changed the stock triggers for better triggers offered as an option from DPMS or the new drop in model from Timney. The new Hunter Series, however, comes with a JP adjustable trigger. Of course, the rifle can be tricked out in any number of ways with other items available at DPMS. All things considered, if you are looking for a long range AR with great accuracy, light recoil, and a bullet in the 123 to 140 grain area, the DPMS LR – 260L Remington will not disappoint you.

The Hunter version is simple and efficient. However, DPMS has myriad add-ons to trick the rifle out in any fashion the owner wishes. Designed primarily as a hunting rifle and not a battle rifle, most of that is just added weight.

The inner circle is 1" outside diameter. The group is 5 rounds. It is .350" center to center of the widest shots.

Noting the size of groups in inches does not always convey the real meaning of a group as well as does some known object. This dime covers the group nicely. The dime measures .703".

Several people used the excellent Deros Rest to try the LR-260L Hunter on a recent deer hunt in South Texas. Both the rifle and the rest worked flawlessly.