Can I Come With Dad? First African Hunt 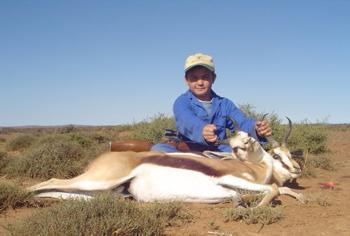 Can I Come With Dad? – First African Hunt

How often have we not heard our youngsters asking this question as we make our arrangements to get into the veld with the manne for a week of hunting and catching up and how often has our answer been an emphatic “No!”? We all want our sons (I have no daughters) to grow up to be fine men but somehow we never seem to give them the chance. When do we expect our boys to make the transition to manhood if we do not provide the mileu and the catalyst? There is no better place than the outdoors for them to get back to basics and find their feet. The veld treats everyone the same and it is amazing how fast one learns to “swim”.

It was with this in mind that a friend of mine approached me with the idea of getting our sons out there for a hunt dedicated to them. The main focus was for them (not us) to shoot a Springbuck and bring home the biltong. My two older boys are 11 and 14 and Kevin’s lads are 12 and 14 – a perfect scenario.

What would I have given to be allowed to hunt at that age?

I have a deep love for the Karoo and the Eastern Cape so when Kevin suggested Aberdeen as a possibility I was very happy and immediately agreed. A Springbuck hunt on the open plains close to the Camdeboo is truly something special and every hunter should have that experience at least once. It does, however, make for some tricky hunting and shots can be in excess of 200m. The very nature of the area does not allow for walk and stalk unless you really want to get tired and come home with nothing. Voorsit jag is the order of the day and it has its benefits because you can lie next to your son/s (I have no daughters) and tutor them. It gave me a deep sense of satisfaction to see all the training I had gone through with my sons pay off as they matured in front of my eyes and told me to “chill” as they made their own decisions and prepared to take the shot.

It all started on the Thursday 1 May as we left Cape Town in the early hours of the morning to head up the N1 to Beaufort West (where we sighted our rifles) and then on to the bustling metropolis of Aberdeen. (The roadblock outside Laingsburg is a story for another day but take a tip from me and check that the registration number on your licence clearance disk is the same as the number plates on your vehicle! Mine was not and I was almost arrested – you can imagine how happy I was). We arrived later than anticipated on the Thursday so we went straight to the veld pulling on hunting gear as we walked in order to get in as much time before the light faded. I had my two sons with me and I set Jonothan up on the mini tripod shooting sticks (poor man’s Harris bipod) and got him comfortable enough to move around if required and still be rock steady for the shot. Now, this was not Jono’s first buck but it would be his first Springbuck so he was nervous. He had done a great deal of range practice and had chosen to shoot my .270 rather than my .243 – a decision I was not going to talk him out of because he was doing the shooting. I had loaded my .270 with 150gr SST Hornday points and he prefers it to the supercharged Sierras that I shoot. I was to back him up with my .243 and Nicholas was patiently waiting his turn with his Krico .222. It was about an hour later that the buck finally came past close enough for Jono to get a shot in and he took his time and placed a shot behind the shoulder that saw the ewe stagger and fall. He punched the air with delight and my chest exploded with pride. What a way to end the day. Nicholas was bleak but he knew that there was the promise of the whole of Friday still to come.

Friday dawned a stunning day and soon we were back in the veld. Shooting positions were assigned and little hearts were pounding excitedly as the Springbuck started moving past. My 11 year old Nicholas was next to me and was itching to see some action. He was shooting 50gr Sako’s in a Krico .222. (Let no one ever tell you that a .222 is not enough gun for Springbuck!) Nicholas had also shot buck before, a black Springbuck ewe and a Rowland Ward Mountain Reedbuck but this was to be his first regular Springbuck. He was so excited that he pulled his first shot and then gave himself a lecture for not squeezing the shot off. Miss! After that things changed and Nicholas ended up shooting two beautiful rams at no less than 172 and 212 meters. I was impressed and proud. Jono had gone off with Morne the land owner and did his old man proud by dropping another beaut ram. Kevin’s son Nick had to wait all day but finally got a shot in and dropped his buck near the end of the day.

The sad story of the trip was that Jason did not get his buck and had to learn the hard way that hunting does not always include shooting. It is a hard lesson to learn and the year ahead will be a long one as he waits for the 2009 trip. He did well to overcome his disappointment so soon and will look back one day and see the value in the lesson. Well done, Jay.

I have been on my fair share of hunts but this one had something really special about it. It was wonderful to watch the two young lads of mine and Kevin’s bond with Dad and learn men’s things from men. (Watching Dad wash dishes was an eye opener for them but please do not let our wives know or we will be roped in at home).

It is from us that our kids learn the basics in life so let’s get it right and get them out there and next time they ask “CAN I COME WITH DAD?”, think of all the benefits for them and you and maybe say “yes”, and then see the joy in their eyes. I did and I cannot wait for next year.