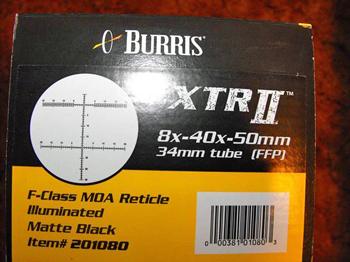 Several months ago, I saw an announcement that Burris was now offering a high powered variable for long range shooting such as the popular F-Class. I contacted Burris and asked if they had any for testing and the answer was that they would have some available in May or June. I received mine on D-Day (June 6th). The model that I received is XTRII 8X-40X-50MM with a 34 mm tube. It features a reticle called F-Class MOA.

Not since 1971 have I used a first focal plane scope, but there are reticles now available that remove many of the negative aspects of this design. Since the hash marks subtend the same distance regardless of power setting, one can use the reticle as a range finder at any power. Of course the reticle is magnified as the power is turned up and vice versa. This reticle features 1/2 MOA hash marks and has a second horizontal "crosshair" that is 20 MOA below the primary one. This allows one 20 extra MOA for shots that can't be dialed. (see picture above)

I mounted the new scope on my trusty BAT Benchrest rifle using some 34 mm rings from Leupold and a BKL adapter to attach to my Davidson bases.

When testing a new scope, the first item of business is to test the tracking and ability to hold point of aim. For this I use a test that I call “shooting the square”. After picking a single aiming point, I fire one shot followed by moving the adjustments 32 clicks up (4 MOA). After firing shot number two, I move it 32 clicks right and fire number three; then I move it 32 down and fire number four. After a final movement of 32 clicks left, I fire shot number five and compare it to number one. Also, I shoot variable scopes at several different power settings to see if there is point of aim changes at various powers.

As can be seen in the photo, this scope passed these tests.


This scope features a lighted reticle, for which I have little need, but I installed the battery provided and tested it. It worked as advertised.

My next test was to shoot it in competition. The only match near me was a 300 yard score match at Jonesboro, LA (about 80 miles away). The match consists of two, 10-shot targets. I managed a 94 on the first target and 96 on the second for a 5th place finish. The scope performed well (better than I did). The mirage was bad and I turned the power down from 40X to 35X for the second target.

For my next outing, I shot a 600 yard match at Pioneer, LA (about 50 miles away). For the 600 yard matches, I use the same BAT rifle but switch from the 6 PPC to a Dasher. The barrel that I used was a Brux HV that is 28 inches long. My load consisted of 32.5 grains of Varget pushing a 105 grain Berger Hybrid and sparked by Federal 205 primers. After zeroing the load at 100 yards, I cranked in 11 MOA of elevation and this got me close at the 600 yard distance.

The day of the 600 yard match (June 21st) brought hot temperatures and heavy mirage. This should be a good test for the scope. There were 39 shooters from Louisiana, Mississippi, and Tennesee and many had premium glass on their rifles. Although the mirage was bad, I managed to shoot the complete (20 round) match at 40 power.

During the course of the match, I had the chance to look through many of the scopes there and the Burris XTRII was as good as any and better than most as far as clarity. Of course the Burris was focused for my eyes and the others were not, but I was very pleased with the optics. I finished second with a 186/4X score and the winner had a 187/2X. It was a good test for this tactical scope.

It seems that many of the newer scopes feature a zero stop feature, and this scope is no exception. After zeroing the scope, one must loosen two allen screws and turn the turret to read zero and push the turret down until it bottoms out and re-tighten the two screws. It will not allow the shooter to turn the turrets lower than this position. Personally, I don’t use this feature but I realize that many do, especially those who shoot several different distances during a match.

Further Testing
After shooting this scope on a 6 PPC, then a 6 Dasher, I decided to try it on the .30 BR. With the extra recoil generated, I could see if the hand fitted inner parts that have triple springs would do as well as they did with the lighter recoiling chamberings. The scope handled the .30 BR without a hitch. The scope has performed so well that I will shoot the Louisiana Varmint For Score State Championship using this scope on my .30 BR rifle.

Are the premium scopes available today worth the asking price? Let me answer that with another question. How serious are you as a competitor? The list price for this scope is $1802, but I have seen it advertised in three places for $1199. Each shooter must decide if the cost is reasonable, but I believe that many will give this scope consideration for their long-range needs. Good shooting…