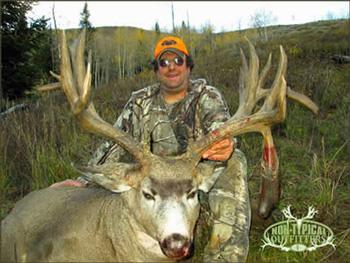 By Robb Wiley
Of Non-Typical Outfitters

The hunt for Snag began in 2011. I actually found Snag before I found Magnum (the giant 257 inch buck we killed in 2011). Snag was younger than Magnum that year. I estimated his age to be about 4 years old. Magnum was aged at 6 1/2 years old when he was taken in 2011. I was only able to locate Snag a handful of times over the next few years. He was a very secretive animal, like most cagey, old, monster bucks.


In 2013 I didn't see Snag even once. I wondered, at the time, if the giant had died on the winter range or been killed by a lion. I was pretty sure no other hunter had legally killed him, as the taking of a buck of that magnitude never stays quiet long. Over the years we have had a number of clients who enjoyed the quest for Snag. As always, hunting for a trophy animal of this caliber, on public land, in a general area, is amazing. It is a true testament to the unbelievable magic of the western Wyoming mule deer herd. I try to never take for granted the gift of having bucks like these living in our backyard.

I finally located Snag again during the summer of 2014. I was able to photograph him that summer as well. We scouted and hunted for a combined 26 days for Snag without another sighting until the day we killed him. He had, once again, proven to be the secretive, cagey buck that I had grown to respect. Our guides and I took turns and worked together trying to glass the giant buck. I had spent a ton of solo days in the area this giant buck called home. Hunting for an animal for this length of time, with not one sighting begins to shake the very foundation of the hunt, to say the least. I would be lying if I did not admit that I was beginning to wonder if we would ever wrap our hands around the rack of this monarch. I started the season hunting Snag with a great friend and hunting client, Tim, for an entire hunt with no sightings. Tim ended up killing a gorgeous 198" heavy, nontypical on the last day of his hunt.

After so many days, weeks, months and years of searching. we began to wonder if Snag was a "mover buck". A "mover buck" doesn't really settle down in one location, it moves all through fall. The famous Wyoming deer, Popeye, was probably a "mover". He was a deer that was easily located in the summer but during hunting season he was never re-located. Tons of hunters knew where Popeye summered and many believe Popeye simply moved to a completely different area during the hunting season. Other famous bucks have fallen into this category. A buck living near the town of Afton known as the "Drama Buck" is speculated to be a mover buck. At Non-Typical Outfitters we have killed other mover bucks over the years, but after 26 days of searching high and low, I had run out of gut feelings, goose bump intuitions or any other ideas of where Snag was.

During a last week, pre-hunt guide meeting, I called on all our guides to join the hunt for Snag (that is, if their clients for the week wanted to). I shared all available intel with the guides. We had one week to make this dream come true, or Snag would likely die on the winter range as he was no longer a young buck. One of the many things that separates Non-Typical Outfitters from the rest is our ability to work together as one team. We all want to be the guy who brings the giant back to camp, but working together, we always have a better chance of getting those giants killed. So with the "all call" to the guides, we went different directions to cover some of the same ground covered earlier as well as previously uncovered territory. Some of the clients elected to simply go after other bucks because it had been so long since we had laid eyes on Snag.
Next page: Buck Fever Hits A Snag >