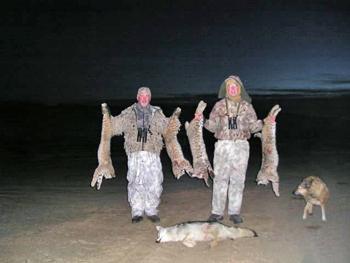 “I’ve got two coyotes coming from across the draw.” Carl whispered from the far side of the big boulder we flanked. Moments later, a bobcat appeared on top of the rimrock. “Cat,” I whispered back. Even though this was Carl’s hunt, he unselfishly told me to forget about the coyotes and take the ‘cat. Like molasses I slowly adjusted my rifle and bipod for the steep uphill shot and the big bobcat disappeared at the shot. There was little doubt it was down but it was well after dark before I worked my way to a break in the rim and got to him, a big male that would bring some serious change at the fur auction.

Another day my son Ben and I made a stand that could have been as productive for coyotes as for bobcats. This time I was the one watching downhill for coyotes while Ben watched the rim for ‘cats. Several minutes into the stand, Ben shot. A couple of minutes later another shot rang out. I gave the stand a few more minutes but curiosity got the best of me and I went to see what the shooting was about.

As I approached Ben, the smile on his face betrayed the fact that he had scored. “Dog or ‘cat?”, I ask. “Cats,” Ben responds, “Two of them!” The retrieval was a little hairy but Ben had an extremely rare double on bobcats! He killed a nice coyote two stands later and, almost miraculously, the very next stand after the coyote, Ben and I doubled again on bobcats. Four bobcats in one day might not be highly unusual in Texas but it’s unheard of in the Northwest. I joke that we should have gone to town to buy lottery tickets!

Bobcats are special. Their unique fur is sought after for the beautiful spotted belly. The hair is like silk. They are an amazing trophy and currently one of the highest value furs in North America. Bobcats are also unique in other characteristics that affect the way a hunter pursues them. The coyote hunter must make adjustments based on bobcat biology, physiology and psychology to increase his success on ‘cats. And, since we’re going to school, we’ll add some geography to the mix also.

Geographically, the bobcat is spread across much of the US and Canada. There are few states where a caller cannot pursue ‘cats. State laws vary in the level of protection afforded the bobcat. Check your local game regulations to ensure you are within the laws for your state.

Biology
Biologically, fur quality varies depending on latitude. Bobcat pelts prime much more slowly than those of coyotes. In my home state of Oregon the season opens the first of December but pelt quality increases into February. The fur of the bobcat is silky and has no guard hair therefore it doesn’t rub like coyotes. There is no concern about pelt quality reduction as the winter progresses.

So, what adjustments should the coyote hunter make when targeting ‘cats? The first is changing locales. Even though their distribution is large, bobcats are not as numerous as coyotes. It may seem obvious but if you want to call ‘cats, you need to be within earshot of ‘cats. Scouting and experience will tell you where to go. Scat and tracks help identify bobcat areas.

Bobcat scat is similar to coyote but more segmented, like a Tootsie Roll. The ends of the scat are more blunt than that of a coyote’s as well. Bobcat may cover their scat and many times will use sandy areas for their ”cat box”. Check road culverts where loose soil has accumulated for ‘cat scat. Tracks show no claw marks. Their retractable claws leave no marks. Bobcat tracks are more round in shape than those of the coyote.