Behind The Scenes With Best Of The West TV 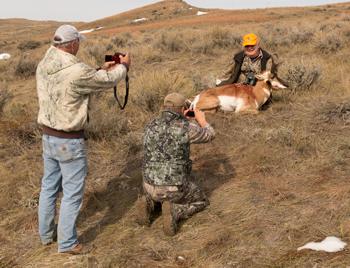 Behind The Scenes With Best Of The West TV

Have you ever wondered how those outdoor TV shows operate in the field while filming a hunt?

I visited with Jack Peterson of The Best of the West last January at the SHOT Show in Vegas. I had met him the summer before in Cody, Wyoming and we'd spent a half day touring the new BOTW facilities and then having a great Mexican lunch together.

During the Cody facilities tour I saw the "production schedule board" on their wall. It was a complicated looking chart with dates, names and places from around the North American continent and the world all displayed on a very large white board. It showed where they had film crews right then or in the coming weeks. If I remember right a film team was overseas in Africa or New Zealand at that very moment.

When discussing where they'd be filming hunts in 2013 Jack suggested that I book a hunt with Matt Burch's Four Horse Outfitters near Montour and Upton, Wyoming and BOTW would film it for their TV show. Ironically just 10 days earlier I had spent a day on the Burch ranch hunting coyotes with LRH member Fonzy Haskell who works there. I came away very impressed with the land and knew I would be back some day to hunt big game.


The Burch family owns something like 160,000 acres of prime ranch land and it is one of the largest spreads in the entire state. With a mix of good grass, sage brush and treed bottom land, its high ridges and challenging gullies make for outstanding deer and antelope habitat. They even have a huntable population of elk.

Just a few days before I departed for my antelope hunt, Fonzy had sent me a photo of a nice bull elk that had just been taken. The elk hunter's family on that one single day had shot deer, antelope and elk. I don't quite know where else you might do all that in one day.

Elk shot the week before


The land has been in the family for several generations and I sense that the Burch family have been very fine stewards, improving the operation significantly with each generation. Many years ago as a young and dreaming man I had thought I may have wanted to be in the ranching business someday. So over the years whenever I come in contact with some of the really cool people of the western states I enjoy learning just a little more about ranching and the unique culture that distinguishes the men and women of the American West.

I rolled into the hunting camp late in the day on a Friday after 900 miles on the road. I knew that the weather had been very bad in the days leading up to my arrival. Here and there I saw small signs of the snow storm from the week before. They'd had a couple feet of snow that had melted but with several more recent days of rain. This was the same system that dumped even more snow in western South Dakota resulting in a very large number of cattle deaths in SD.

My last half day of travel had been in 20 to 40 mph winds with a fair amount of rain. At one point the pickup truck in front of me lost its crossover tool box. Suddenly there it was whipping through the sky just off to the side of my own vehicle on its way into the ditch. A few miles further on a pickup stopped to refasten its tonneau cover which had started flapping in the wind.

I had been hoping to check the zero on my rifle upon arrival. They have the best target setup for their hunters that I have seen anywhere. There are 12 inch square steel plates at 400, 700 and 900 yards. A shooter can use a solid bench -- or as I did -- get prone with no tall vegetation in the way. It was a little muddy so I used the shooting mat that I usually travel with.

Part of the reason for the target quality is that BOTW presents some of their shooting classes on the Burch Ranch. They also offer a BOTW shooting class coupled with a subsequent antelope hunt. That would be a blast. No pun intended.


On the evening when I arrived, it was a little dark by the time the wind died down enough to shoot, but I took a couple of inconclusive shots anyway. The next morning it was nearly still at first light and two other hunters and I shot our guns in much better light. Then I headed out with Fonzy and one other antelope hunter named Jack. (Not to be confused with the other hunter named Jack whom I rode with the second morning.)

The plan was for Jack to be the designated antelope shooter that first morning while I waited for my turn to go out with the film crew for my own antelope hunt. We planned to meet up with the film crew later in the day but the muddy conditions threw a huge curveball at us.

It was an exciting morning, not only because of the hunting but due to the muddy conditions. At one point I remember saying it is only a matter of time before we are stuck. Mid-morning one of the other hunting vehicles did actually get stuck and it took a lot of time before a rescue vehicle was able to break off from their own hunt and get the other one unstuck.

I felt sorry for the added pressure that the mud placed on both the outfitter and on the BOTW film crew. The ground was saturated with the melted snow and then heavy rains in the two days before I arrived. The hunts were already behind schedule for weather reasons before I and the film crew showed up on Friday, and now on Saturday the mud was still a serious foe. It was only later that I fully understood the extent of the pressure that the teams were under.

In any case, we saw lots of antelope on that first morning. Jack with guide Fonzy eventually set up on a nice buck and got off what looked like a great shot right into the shoulder of a slightly quartering buck. The buck had been standing right next to a fence and at the shot it turned and jumped over the fence. We were flabbergasted. When the buck was eventually brought down we could see that the bullet had passed through the chest and somehow missed the lungs. That was one tough antelope!

Jack and his tough antelope buck


The plan had been for me to meet up with the film crew and start my own antelope hunt that afternoon. But weather and mud trumped that plan for that first day. Normally there are about 50 miles of ranch roads that are used for hunting. On the two days I was there we were severely limited in our access to perhaps 4 miles of ranch roads.
Next page: Behind The Scenes With Best Of The West TV - 2 >