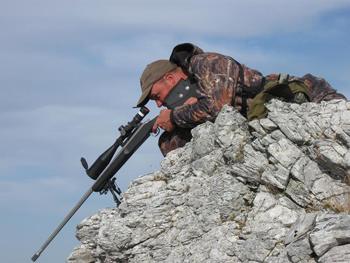 On August 27th 2008, my hunting partner JR and I flew into the Nome, Alaska airport. We met some friends of mine to go on a long range barren ground caribou hunt near the Arctic Circle. Tony met us at the airport and took us to meet Chuck and Jack at Dexter, Alaska where the base camp was located.

We spent the entire first day and half of the next packing gear in preparation for the 8 day hunt. We loaded 2 Polaris Rangers, a Polaris 6x6, 3 trailers/tankers and enough gear to spend a month on the tundra on a trailer and in an old U-Haul truck. Now when I tell you a mountain of gear, I mean a mountain of gear. These guys believe in being comfortable in camp. One trailer had a freezer, Vacu-Pak and generator for processing the meat at camp!

With our pile of stuff loaded, stacked and strapped down we drove to the end of the road. Only in Alaska do you truly come to the end of the road where there is a sign that says, “End of the Road”. At the end of the road we stayed in a cabin that belonged to a friend of Tony’s. Early the next morning we left in an ATV caravan for our hunting area. This was a unique experience for me as I am not used to traveling 6+ hours by ATV to get to my hunting area. This is where I got my first taste of tundra. For those of you who have never seen tundra it is very much like taking a boulder field and covering it with wet sponges. How something so soft and wet can be so rough to cross I’ll never know.

We saw a few caribou, musk ox, moose and even a red fox on the way into camp. We arrived at our destination (the “secret” camping/hunting spot) about midday. Midday is a relative term in Alaska this time of year. It was in reality almost 5:00 PM, but felt like noon. We got a monster sized wall tent setup, cots, kitchen, gassed up the ATV’s, loaded hunting gear back into the ATV’s and waited for nightfall so we could get on with tomorrow’s first day of hunting. I waited and waited and waited, finally it got dark around 11:00-11:30 (you could still see color on the horizon though).

The next morning finally came and I was up and ready to get to where we needed to be by first light. The old “pros” almost laughed me right out of camp. It seems that this is not as critical or even important as it is hunting deer and elk in the Northwest. So at the ripe hour of 9:00 AM we left camp in search of caribou. I had expected to see the mass migrations you read about in the magazine articles, you know hundreds of caribou at a time moving in front of you. This was a little different. What we ended up seeing were small groups of mature bulls. I did not see a single cow caribou the whole time we were there. It is critical that you have migration routes timed just right for this action, as you are on the very tail end of the action and close to missing the last of the migration pattern in your area.

Sometime around noon, I spotted with my binoculars what I thought were 3 caribou. JR broke out his Leica spotting scope and discovered that they were in fact 3 Artic wolves: 2 grays and a nearly all white one. This was good news and bad news. Good news for JR. He had a wolf tag. And bad news for me as I did not. Big barren tundra is very range deceiving. We drove below a ridge line until we were almost in sight of seeing the wolves again, and moved over the ridge to glass and locate them. Tundra lesson # 1: the terrain is so flat and rolling that simply getting to the top of a “ridge” can take several hundred yards. Once we located the white wolf, we set up for a shot.

Tundra lesson #2: unlike the Northwest, in most places just because we could see them well did not mean we were in range. My Swarovski range finder gave me nothing. So out in the open we simply stumbled over the tundra (because that is all you can do) and got set up again where it looked “good”. This time I got 3 consistent readings: 1985, 1992, and 1987 yards. Well, that was a head scratcher. We figured we needed to cut the distance in half to get the shot into the high % category. Again, we simply moved straight toward the wolf and ranged as we went, having no other options. We finally got set up at 963 yards and felt pretty good about our setup. The wolf lay down on the ground facing us and watched our activity. I assumed he was trying to figure out whether or not we were something he could eat.

We entered the conditions into the PDA and looked at the wind. We made our best estimations and then stayed on top of the wind while waiting for the wolf to stand and give us a good shot. Quite some time later, the wolf got bored with us and stood to leave. When he turned broadside and stopped I told JR to “send it”. I was shocked to see the round impact the ground low and the wolf head across the tundra grabbing gears. Later we found JR’s zero to be almost 2.00 moa low. This was strange, since in over 2 years the rifle has never shifted zero. Lesson learned about flight to remote destinations: always zero when you get there no matter what. It was an unfortunate finish to a unique opportunity.

It was later in the afternoon when I spotted the first group of caribou. They were maybe 3000-4000 yards away (a bit far no matter what you are shooting!). It was at this point that I got tundra lesson # 3: you don’t just take off at mach 2 over the tundra, it is slow going and you have to lead the caribou’s direction quite a bit to intercept them.
We rocked and rolled over the tundra as fast as our kidneys would allow and finally closed the distance to a little over 1000 yards. Now it was time for tundra lesson # 4. (Pay attention; you will see this material again) Ranging anything over 600 yards on the rolling tundra was difficult. Getting a consistent reading was almost impossible.

We finally got a good reading at 1028 yards, but the caribou had moved quite some distance by the time I got dialed in. The good news was they actually closed the distance some and were now at around 927 yards, so we thought. I dialed for 930, looked quickly at the wind, and held 2.00 moa right. I fired my 300 gr SMK from my 338 Edge, and from the bull’s reaction the bullet went high, completely clearing him and landing behind him. Tundra lesson #: 5 bullet impacts are nearly impossible to spot.

The BNGN (bad news/good new) was I had missed, but the bull ran closer to us, turned broadside and looked back at the impact spot. My “ranger” said he was at 827 yards. I dialed for 825 and now, somewhat flustered, fired without checking the wind that had obviously picked up, causing my impact to hit the bull good for elevation but a little further back than I’d have liked. The bull spun and trotted into some willows, where we followed it up and collected it. I had taken a pretty good bull, but not my crowning moment as far as shooting was concerned.

Shortly after loading my bull into the Ranger, Tony spotted a set of caribou antlers sticking out of the tundra well over 1000 yards away. We drove to a closer spot where we could again locate the antlers. JR and I moved to about 400-500 yards from the bull but could not get an accurate range on the antlers only. We figured the bull to be bedded down at 450 yards but could not confirm it. JR set up for a 450 shot and we waited for the bull to rise.

We didn’t have to wait long and the bull got up and turned to walk down a water course. JR sailed a 300 gr SMK from his 338 Edge through the heart, and the caribou ran a very short distance and went down within sight. We drove over and loaded the second caribou into the Ranger and headed back to camp. When we arrived at camp, Chuck and Jack had each shot pretty good bulls and the skinning, hanging, etc. began.

On our second day of the hunt Tony had yet to shoot a bull and was itching to use his 338 Allen Mag I built him special for this trip. We had not been out of camp an hour when I spotted a group of caribou bulls about 7 or 8 in number. We moved within 700 yards of them with the group moving toward us. By the time Tony got set up, they had closed the distance to 400 yards, not a challenge with the equipment at hand. Tony dialed for 400 and drilled the biggest bull and rolled him with one shot. We loaded up the bull and hauled him back to camp to hang with the others.

Barren ground caribou have a lot to offer the long range shooter and many challenges to offer as well. We learned several things about varied terrain and hunting a new species of animal. Caribou tags are over the counter, do not require a guide, and are a great long range hunting experience. I highly recommend going on at least one caribou hunt at some point in your hunting career.