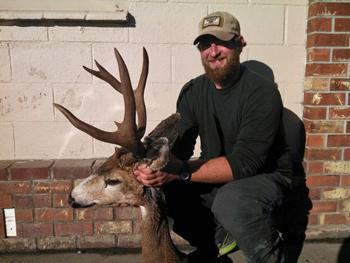 There are many areas accessible for hunting by road which hold plenty of quality game. Each year I see pictures of monster bucks taken in easy-to-access country. So why would anyone take the extra time and effort to hunt the backcountry? Each “backpack in” hunter will have their own reasons, but a sense of adventure is sure to be near the top of everyone’s list. There are fewer hunters (especially without stock animals) to compete with. Unless weather is poor you are constantly enjoying breathtaking views of mountain vistas. Trading in tires for Vibram soles slows your pace and heightens awareness of your surroundings. As the miles pass you discover what it truly means to “get away”. These days there seem to be more stresses, pressures, and just plain stupidity to “get away” from!

Our society seems to increasingly cater to the lowest common denominator. We have rules and laws to protect the dumbest among us. We are not allowed to take even the slightest risk, no matter our level of skill or experience (unless we want to risk other people’s money). The wilderness is exactly the opposite. There are no laws restricting your path of travel to the safest possible route. There are no warning signs to protect the dimwitted. You can accept risks, but nothing will stop you from experiencing the rewards or consequences associated with them (and I’ve had plenty of both). Having a little more skill or knowledge can pay big dividends. There is no handicap imposed out of a sense of “fairness“. Mother Nature doesn’t hand out participation trophies, but there are some trophies to be had. This experience can be taken one step further by going solo.

In the 2013 season I missed out on my beloved “high buck hunt” in September since I was hunting mountain goats in Alaska. While I feel this was a very good excuse, I couldn’t wait to get back into Washington’s Cascades. I was lucky enough to get six consecutive days off during the “main season” and I knew exactly where I wanted to go. In 2011 I started watching YouTube videos by Steve Isdahl (user name Proguide66) on black-tail deer hunting. The videos are intense and they rekindled a long extinguished flame. From the time I was about 15 up until my early 20’s I was obsessed with black-tails and had little interest in harvesting anything else. I took four mature black-tail bucks during that period (three of them solo) before I moved on to high country mule deer. Adding fuel to the fire, during the 2012 main season I saw a very large 3x4 black-tail buck bedded in some cliffs just 120 yards away. The problem? I was hunting bear since I had filled my deer tag with a young muley on the high hunt a month before (had to make a quick decision and misjudged him). I resolved that I would attempt to harvest a mature black-tail in 2013.

My dad had discovered some quality black-tail country many years before I started hunting. This particular area is quite remote as there are no trails. We call the area “naked man” because on one trip my dad met a man who wore no clothing, save socks and boots. Imagine my dad’s surprise! The naked man explained he was shocked that he wasn’t alone in this pristine wilderness. It’s not the easiest area to access or hunt, but once you’re in, you will have the whole area to yourself. If you were to see someone else (I haven’t yet) you can be sure they are certifiably insane. Back in 2011 my dad picked up a shed antler from a true monster black-tail in this area. If his other side matched he’d easily go over 140”. The bases on the shed were not super heavy either, so we were thinking he was getting close to his prime. That’s more than enough motivation for me!

At first light I began climbing from the road. 6 hours later I arrived at my predetermined camp. I didn’t take the best route, and paid for it with a little extra time and effort. I was hoping to see several deer and at least one buck every day. Well, the first two days of my hunt I was totally skunked. I found plenty of sign but I did not see a single deer, not even a doe. I had snow in places but it was not fresh. Black-tail hunting can be tough. This is not the first time I’ve been skunked. I was hunting hard, probably harder than ever. When hunting mule deer I consider myself skunked for the day if I do not see a buck. This almost never happens! I was discouraged for sure, but I knew better than to give up. I was getting lots of knowledge based on tracks, rubs and trails about where certain bucks were “hanging out”.

The third day was a breakthrough. I moved slowly through the woods at first light, using my binoculars constantly. Only a few hundred yards from my camp I picked up slight movement. A little dark in the woods still, it was hard to make out details. So I just watched silently for several minutes. I was looking at a good mature 3x3. He was only about 16” wide but he was quite tall. Normally I would drop him in his tracks (I generally don’t pass on mature black-tails). I already felt like I knew his area as I’d spent some time trying to decipher his trails and rubs on the previous two days. I figured I might try to find him on my last day if I couldn‘t locate a bigger buck.

Having a very positive attitude about my abrupt change of luck, I turned and started to climb through the woods heading to the ridge top. I saw several does and stayed with them until I was confident there wasn’t a buck nearby. I had to move through a portion of meadow (which I try to avoid). The meadow was very loud as all the plants had been frozen and crunched under my feet. I felt like I was in a very good area at the top of the ridge and was moving painfully slow even though I was making plenty of noise when I did move.

About fifty yards away I hear a deer crashing, and then stop suddenly. I strained to pick out the buck through my binos. He had a great looking frame as far as I could tell. He looked to be 20” wide. I couldn’t make out much more. The twigs and branches blended with his rack so well. Was this the big buck I was after? I could tell for sure he was legal but little more. I kept adjusting the focus knob, hoping the details of his rack would become clear. There were at least four layers of thick brush between myself and the buck.

I was considering taking a shot through the brush. He swung his head, looking directly toward me. I just couldn’t chance a poor shot through brush even though he wasn’t far. The wind was in my favor and I hadn’t moved a muscle, but the buck knew better and took off. I didn’t think I’d have a chance of catching him again that day, and I wasn’t convinced he was the big one.
Next page: Backpacking for Cascade Black-Tails - 2 >