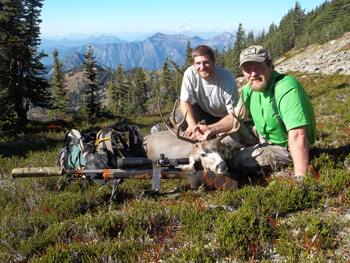 For the 2011 hunting season, I carried a 14.5 lbs rifle into the wilderness, a custom 270 Winchester (see article). It was as accurate and ballistically capable as it was heavy. A 28” varmint contoured barrel and AICS were the biggest culprits in the obese nature of this rifle. Not yet thirty years of age, I can carry the extra weight with little negative effect overall. The long barrel when traveling cross-country was probably the greatest setback. By the time the 2012 hunting season was weighing heavily on my mind, the thought of taking my 270 into the wilderness led to almost involuntary back stretching. Perhaps a gear upgrade would be appropriate in the rifle department. The 270 was meant to serve in match shooting as well as hunting. My next rifle would have no double duty stipulations.

Ron (of Benchmark Barrels) and I started kicking around ideas for a more appropriate alpine hunting rifle. I was thinking of a 23” varmint contour, Ron was thinking 25”. Based on our past experience with the cartridge, we were both thinking 7WSM. I used one for competitions 6 years ago, and had taken one buck at 550 yds with it. Ron has also used the 7WSM in competition and has taken numerous game with his “7’s” all the way out to 857 yds. Even Ron’s nephews Caleb (10yrs old) and Jarred (16yrs old) took bucks at 506 yds and 430 yds respectively with the cartridge. The 7WSM is a hard cartridge to beat when it comes to hunting. The comparatively poor barrel life isn’t a major drawback for a dedicated hunting rifle.

Another option was thrown into the mix when Ron and I started testing and demonstrating suppressors for Cascade Armory. Not only do suppressors cut down noise and recoil but they’re just down right fun to use. Spotting for a shooter using a suppressor is noticeably nicer. You expect the harsh crack of a braked magnum, but instead there’s no muzzle blast and the noise level is similar to a .22lr. We thought it might be nice to run the rifles suppressed for hunting. Although we often split up, in the past we have seen two good bucks together. A suppressed shot might allow a little extra time for the second hunter to collect. A suppressor could be removed and stowed away allowing for easy travel through thick trees or brush.

The idea behind our Alpine 7’s is absolutely nothing new. Many long range hunters have already “been there, done that”. Many high country hunting rifles use light barrel contours. I just couldn’t get myself to ask for anything lighter than a Remington varmint contour. I know one can often use much lighter contours and still achieve excellent accuracy (I’ve got a fluted number 5 contour in 260 rem that’s exceptionally accurate). Going with the varmint contour was simply insurance that the rifle would shoot very well, insurance that is paid for by carrying a little extra weight. For the suppressor it’s also nice to have a little more meat on the barrel to provide a better “shoulder” for it to bottom out against. The next item I had to decide on was the stock. I would have used a Grey Bull Precision stock, like the one Ron used on his rifle, but there were availability issues at that time. I was interested in trying a Manners stock, but I just couldn’t afford it. After a lot of searching I found a decent compromise, the Bell and Carlson Medalist M40 style. It was only $210. The stock has a semi vertical grip, a higher than usual cheek piece, an aluminum bedding block and comes in at around 2.6 lbs. We both went with quick clip DBM systems, and Leupold Mark 4 scopes.

With load development Ron and I parted ways. He decided to stick with the 168gr Berger VLD’s we’ve had so much success with in the past. I decided that with the much shorter barrel and the use of H4350 (a fairly fast powder for this cartridge size) the 140gr Berger VLD might work very nicely as well. The 168 would have less wind drift but the 140’s made the rifle slightly less “hold sensitive”. I settled on a load of 62gr of H4350. This gave me a muzzle velocity of 3150fps. It proved to be exceptionally accurate. I would often shoot a few groups to zero or check zero. I would always seem to get at least one screamer group in the .1’s (for 3 shots). The rifle was consistently printing in the .3’s and better. Long range testing was equally impressive. Due to the use of the lighter bullet I was not intending to shoot game much past 750yds even in perfect conditions. Out to and even beyond that distance making first round hits in practice was simple.

Ron and I spent a lot of time in the months leading up to hunting season practicing with our rifles and scouting for high country bucks. The closer we got to opening day the more confident we were in our equipment and our options for good bucks. Some of those scouting trips were adventures neither of us will ever forget. As old men we will likely look back on these times as some of our best days. With everything going so well, and expectations so high, we couldn’t have predicted a turn of events. With an unusual heat wave (record setting dry spell) and unprecedented wildfire activity in Washington State the hunt didn’t start out on a positive note. Bear season starts over a month earlier than the “High Buck Hunt”. Unfortunately for us, there had been some activity in the canyon where we expected our big bucks to show up. This is simply a reality when hunting public land. Even when you find an area that most aren’t willing to go into, there are some who know how to use horses, llamas and other stock animals to get in many miles. The heat (and possibly also the smoke) seemed to make the deer limit their movement.

We still managed to see legal bucks every day, some better than others, but nothing that we felt like taking home. We hoped that things would calm down and the bigger bucks would make an appearance. They didn‘t, even so, there was plenty to hold our interest. That high country holds a lot of wildlife. We saw several elk and even called in a nice bull (from 600yds to under 80yds) one afternoon by whistling and raking trees with branches. Most days we saw at least four different black bears, and a coyote or two. Even mountain goats made an appearance. After a few days with no big buck sightings we decided to move to another area. Our other spot was miles away and the heat made travel during the day inhospitable. Analyzing our options we decided to do most of the hike at night or at least the portion that followed a trail making travel easy with our headlamps. So we hiked into the early morning, making camp in time to catch a few hours of sleep.