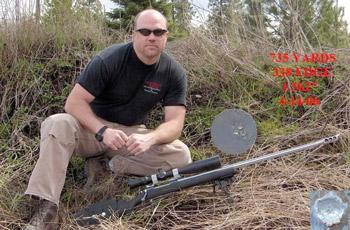 The 338 Edge is simply a 300 Ultra Mag necked up to .338”. This is a simple process requiring no more work than a standard .338 reload. I choose this option for the 338 Edge for several reasons. First, the round had to run through a Remington 700 long action, use a standard magnum boltface and launch very high BC 338 bullets. I settled on .338 caliber for the Edge early on for its BC and weight.

When I started searching for a suitable case for the Edge, the 338 Ultra Mag case was the only realistic choice. When Remington released the 338 Ultra Mag it occurred to me that there could be some confusion about what you could chamber in the rifles, so I named the round the 338 Edge mostly to avoid confusion of the 338 RUM vs. 338-300 Ultra issues.

Jacob Gottfredson wrote an article about my 338 Edge test rifle that published in the October 2000 issue of “The Accurate Rifle”, this article on the 338 Edge can still be viewed in the “snipers paradise” website. Since initial development of the Edge we have been refining the 338 Edge to become the most practical “bang for the buck” available to the long range hunter/shooter/tactician.

Our first refinement to the 338 Edge was to move to 30” match barrel of extreme quality. We chose Hart barrels based on reputation and our experience with them and have never looked back. We currently use others as well for the 338 Edge but the Hart tubes are the overwhelming majority used for the Edge.

With the longer barrels used for the 338 Edge we started running heavier bullets specifically the .338 Sierra 300 gr. SMK. We can run the 300 SMK .338 bullet 2800-2950 fps depending on the load and individual rifle. Our initial push was to develop a 338 Edge bullet rifle combo that would penetrate 3/8” mild steel @ 1000 yards with extreme accuracy. Below you see the results of a 338 Edge bullet cratering in a piece of ½” T1 steel at 735 yards. This bullet /speed combo in the Edge will penetrate 3/8” mild steel at 1000 yards.

What has become our standard load for the 338 Edge runs right at 2800-2830 fps. While you can run faster, this 338 Edge load combo gave extreme velocity spreads of low teens and single digits. Also since we were using a Hodgen “extreme” powder for the 338 Edge when we tested temperature sensitivity we found it to vary less than 30 fps from 20-90 degrees. No other combo we tested came close to this kind of consistency in the 338 Edge. From my position I will gladly give up 100 fps (or less) for this kind of performance in the 338 Edge. To put this performance into perspective, running the 300 grain .338 SMK at 2800-2850 fps and shooting a big game animal at 1000 yards with the 338 Edge is just like putting your 308 Winchester right against the fur!

Notes: Accuracy alright, ES all over the chart

Notes: 92-94 gr. is our standard load for most rifles but is a maximum load. Accuracy is unbelievable.

We developed and launched a line of muzzlebrakes based on testing of multiple designs that took us over 2 years R&D time. You can from a good position watch your bullet strike at almost any distance past 500-600 yards with your rifle scope. This makes spotting your own shot possible.
Despite having designed the Edge and HTIR (Hard Target Interdiction Rifle) platform for military and police application we found out right away that launching a 300 gr. SMK at big game at long distances was hugely rewarding, not only was the accuracy outstanding but the 300 gr. match bullet had great terminal performance at distances out to and past 1000 yards. So began the world of the 338 Edge in long range hunting.

338 EDGE FIELD PERFORMANCE
With our standard load of the 300 gr. SMK @ 2800-2830 fps we have come to expect sub 1” groups at 300 yards from our rifles. This is not an exception but the rule. It is not at all uncommon for our customers to record groups under 4-5 inches at 1000 yards. Again this is the rule not the exception. The exceptions are the letter or photo we get of 2-3” groups at 1000 yards. I have shot back to back 3 shot groups at 1276 yards under 5 inches (see below) in near perfect conditions.

I have witnessed others shooting rocks at extreme distance (1708 yards) and printing 3 shot groups in the 12 inch range. These are possible but exceptional. In field and hunting application I have spent considerable time in testing and practice with the 338 Edge, having run it out to 2000 yards in practice and taken numerous big game animals past 1000 yards with it. In a world where more/bigger is better, the edge has found a home with those who are seeking big (but not the biggest) long range horse power, unbelievable accuracy, great terminal performance, easy loading, and cost effective solution for long range hunting.

We have built over 60 338 Edge’s in different configurations at this point, 700 repeaters, 700 detachable box setups, 700 solid bottom single shots, 700 light weights, and customs actions BAT, Lawton, Nesika, etc. Most have been in similar configurations for long range hunting. Most wear the Leupold MK4 or Nightforce NXS optics and weighed in around 13.5-15.5 lbs. Our main focus lately has been to develop a shorter lighter long range hunting version of the “Edge” and we hope to have completed this project and be testing by fall of 2008.
Shawn Carlock is a veteran law enforcement sniper and the current USPSA national precision rifle champion. He runs his business building custom rifles and conducting precision rifle training for civilian and law enforcement interests.