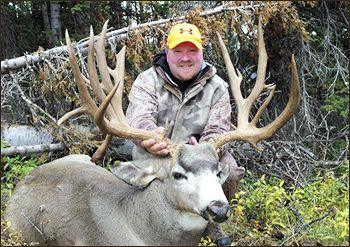 It all began as a dream over 25 years ago. Ever since I can remember, the thing I looked forward to most throughout the year was hunting season. You see, I was born in Wyoming, which means that the chances are better than not that you grew up hunting, fishing, and enjoying the outdoors that we are blessed with here in our state. I just could not wait to go hang out with my dad, and whoever else might be going with us, and walk the hills in search of the plentiful game.

I always remember nagging my dad to shoot the first animal that we saw, and many times out of sheer frustration he would do so for me, even though I knew he probably wanted something bigger. It was these early hunts where my passion for hunting grew into somewhat of an obsession for me. At times it was all I could think about. I was constantly browsing the Cabela's catalogs and hunting magazines or books that I could get my hands on. I knew at this time my Dad and I would be hunting partners for life.

As my appetite for big game hunting grew, I knew that I wanted to start taking more mature trophy animals because of the challenge that it presented. I began doing a lot more scouting and spending a lot more time in the outdoors as time went on, but still, I was having a hard time finding animals that I wanted. It is for this reason that I started to look at doing some guided hunts. Unfortunately, life had eventually taken over and work soon became my priority, leaving little time to put in the effort needed to harvest trophy big game. I was just getting to a point in life where I was going to be able to physically and financially do what I needed to make some of my hunting dreams a reality, when the unthinkable happened.

In the summer of 2004, I was working on a rig outside of Baggs, WY just like any other day. I went to work not really thinking one way or the other if life would be any different when I finished my day – but this day it was. That evening I had a piece of casing fall on me. It ended up breaking my neck and back, crushing my hand and causing various internal problems and severe head trauma. I was life-flighted by helicopter back to Casper, where they began putting me back together.

I remember little from my time in Casper, other than the doctors coming into my room and squeezing my feet and legs to see if I had regained any feeling in my lower extremities. They were telling us that I might not walk again. I remember thinking to myself, "This can't possibly be happening…" I couldn't stomach the thought of not being able to do the things that I love. The only thoughts that really kept me going were my family and my desire to someday get back to the mountains.

God willing, I began to regain feeling as my nerves healed and the surgeries took hold. I was then flown to Denver to Presbyterian St. Luke's to spend the next couple of months getting more surgery and recovering from the accident.
Next page: 240 inch Wyoming Giant - 2 >