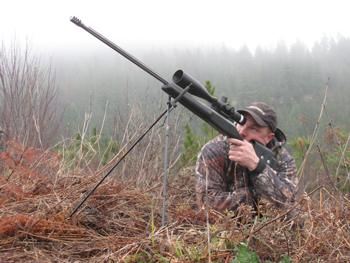 1. Get your rifle as close to the ground as possible. The higher your body and your rifle are up in the air, the less stable you typically are. Not all field positions allow you to be right on the dirt, but be there whenever you can. Even if you do not use a bipod on your rifle, simply being prone and unsupported is a better position than sitting, kneeling, or leaning against a tree. The closer you and your rifle are to the dirt, the more stable you will be. Now, getting low may not always be possible, so be prepared for other unique field shooting positions, but try to stay low whenever possible.

2. I use a bipod on my rifle whenever I can. In keeping with my preference for being low, I use my low benchrest bipod when ever possible. My preference is for the Harris “S” series with a pod loc. With this, I can even from the standard crappy hunting position get the rifle locked in level using the lock and the Anti Cant Device. It has been my preference whenever possible to have the rifle’s front end supported, so all I have to worry about is the rear of the rifle.

3. While I like to be low, it is not always possible, and while I like bipods on my rifles, they will at times not allow the shot to be made. I am not a huge fan of shooting sticks. I’d much rather be low to the ground, but sometimes that is just not possible. When the only way to get the shot is to take a high position, I break out the sticks. I have practiced with shooting sticks quite a bit, and while they help the high position a great deal, I cannot shoot as far effectively with them as I can with a bipod.

4. Use rear support on your rifle anytime you can. If I am over the bipod (like I hope to be), I always use a rear support. I carry a small nylon bag filled with polly beads just for this purpose. I have used ammo boxes, fanny packs, a piece of wood and even a rock for rear support. My point is this: 99% of the people I have seen shooting with their hand as a rear support shot their rifle much better with a solid rear support. Rear support allows you to let the rifle ride the bag a little during recoil, tends to keep the rifle pointed at the target after you fire, and is consistently more solid than a hand.

5. I carry some seemingly odd gear at times. Several years ago, I started carrying rubber coated tree hooks for archery in my pack for odd shots, like sitting on the side of a steep canyon trying to shoot straight across. When I say steep it was even too steep to use standard length shooting sticks. The other scenario is a steep uphill shot. Even if you can get the front of the rifle up high enough, it is still an awkward position prone behind it. I have found it a much more comfortable position to screw the step into a tree and shoot from a sitting position with the tree hook as front support for the rifle. Is this as stable as prone with a bipod? Not for me, so my effective distance decreases some. I can still shoot a substantial distance from this position. If you don’t have one in your pack it is not even an option.

6. I practice from odd shooting positions. Part of this comes as a necessity for tactical long range competition, but spills very nicely over to the hunting field. Practice shooting your rifle over a log that is 20 inches in diameter. It can be pretty effective if you learn a solid position to use with it. Practice shooting 90 degrees to the rifle. This is a common occurrence in steep country. Practice shooting steep angles or positions that put you at a steep angle to the rifle. This usually affects your cheek weld and can affect your impact. Shoot over your pack, sticks, logs, rocks and anything else that is common in your hunting area.

7. Practice uphill and downhill corrections. Use an Angle Cosine Indicator and learn to really dope the uphill and downhill shot. Again, this takes some more time behind the rifle in the field to confirm you’re doing it right. Along with this practice, you can tune your rifle position for these shots.

8. Make sure your rifle fits you. This is more important than people think. Too long of length of pull will have you stretching to gain a full view from the scope, and does not allow for consistent mounting of the rifle. Too short causes a craned neck position and causes the same inconsistent scope alignment/rifle mount. Cheek weld: This is the big one. Too long or too short ultimately causes improper and inconsistent cheek weld. Lack of a proper height comb or lack of adjustable cheekpiece is the most common cause. The bottom line is if you don’t look through the rifle scope the same you won’t shoot the same. Consistency is precision.

9. Use an ACD (Anti Cant Device), I have them on every precision rifle I own. The evils of canting your rifle become painfully apparent at long range. I get guys in my shooting class every year that come without them and tell me they never have trouble keeping the rifle straight. They usually do well at the range of the bench at the known distance range, but it is often a different story when we start field shooting positions. Back in our crappy shooting position that we are typically blessed with while hunting, it is difficult to keep the rifle in a level position when you’re not in one yourself. Anti Cant Devices are cheap insurance.

10. Get off the range. Once I have the initial accuracy tests done on a long range hunting rifle, I do a few things. I quit shooting groups unless I believe there is a problem with the rifle. I shoot field shots at targets like steel plates that are vital zone size (I don’t care if I can hit a 3 foot place at any distance) and rocks that are again vital zone sized. I shoot these shots from real field positions with my hunting equipment. This kind of shooting practice goes a long way in preventing a failed shot that is taken in the heat of the moment from what seemed like a good position when, in reality, a little practice with your rifle would have let you know it wasn’t.