I knew this would catch you like a fish!
Last year my uncle passed on, he was a Vet and fought like hell in Korea, he was a guy that would never back down from any person.
Well about ten years ago he showed me the com to his safe and would let me and my brothers wipe his rifles down..this started when I was about 10 so lets go back 45 years ago.
we went with heavy hearts and went through his safe( he never got married or had kids as he called them Bratts) there were 6 Remington Springfields and 4 M1Garands. Two of the springfields had been drilled for peepsights the rest are in new condition thats right in new condition...not a scratch,dent,ding nothing he started building a Sporterized Springfield and its
just about done, I get to finish this. He got a stock from some one it looks like a Remington stock in grade 5 wood, and I may need some help...I got the bolt jeweld I stuck some Williams peepsights on it the front sight is a ramp type, bolt handle has not been touched. I have taken some great care not to screw this up.when you pull the bolt back it only drops about a 1/4 inch.
it's tight. after removing all the parts I ran it through a media blaster, this did very little so I used some very light sand blasting and some steel whoole and after all the parts were done
they went into a can of light oil. the safety has been changed, the rifle is all blued..if the Rifle isn't a shooter I would like to change the Barrel but who cut Barrels to replace the Springfield
taper. The trigger is now a timney..what else can I do?
S

I'm guessing on some of this, but a Remington made Springfield could be a 1903 or a 1903-A3. If it's an early 40's 1903, the original rear sight would be an open type near the back of the barrel. It would have all or most all forged parts, and a 4 groove barrel. If it's a Remington 1903-A3, the original rear sight would be a small peep sight on the receiver bridge, and probably a 2 groove barrel.

Some of these rifles, both 03's and 03-A3's were accurate enough that the battle sights were the limiting factor, including some with 2 groove barrels. Generally though, 4 groove barrels are preferred. I don't know of any of the custom barrel makers who offer a pre-threaded and short chambered Springfield 5-shooter barrel. The barrels have a coarse pitch square form thread and all the military barrels had to be thread timed to make up and clock in the sights at 12 o'clock and the extractor cut at 3 o'clock and still headspace on any one of several million rifles. Pretty impressive machine work! They also have a conical breech and the extractor cut that complicate custom barrel installation. A custom barrel doesn't have to be thread timed though. Any 'smith that does pre-64 Winchester M-70's can do a Springfield.

A long time ago I used to see a lot of Springfield based NRA match rifles and even a few (outwardly unaltered) in Service Rifle matches. Many of them were as good or better than their shooters were with iron sights.

My recommendation would be to bed and float it into the sporter stock and shoot it. The Timney trigger and the Williams rear sight will be as good or better for accuracy than the originals. If you can find a globe front sight that will fit, it will help also.

You have a pretty good chance that the rifle will be better than its sights and shooter. With ammo that it likes, 1 moa is very possible if the original barrel is in new condition with a good crown. I predict that you are going to be pleasantly surprised at what the rifle can do.

Incidentally, check out the going prices for vintage, original, as new Springfields and Garands. They have been better than investing in gold. Don't sporterize any more of them.

This rifle is a sporterized Remington US Model of 1903 made between 1941-1942 in New York. I am pretty sure that is the way it came from the factory except for the bolt looks worked-on.

I got 1.56moa group with the Lyman sight but the cases were for my Eddystone and fit kinda tight. I haven't tried a group with the new cases but I bet they shoot better.
K

My Brothers said the same thing..the only reason I got my pinkies on this one, is he started and never finished it.
He left bunch of other Rifles too! lots of Deer rifles,94s .3030 and 32special, 95 in .3040, Ted Williams shotgun and a 1200 Winchester.
J

Since this post spurred my desire to develop a load for the Springfield,I'll post the group I got today. 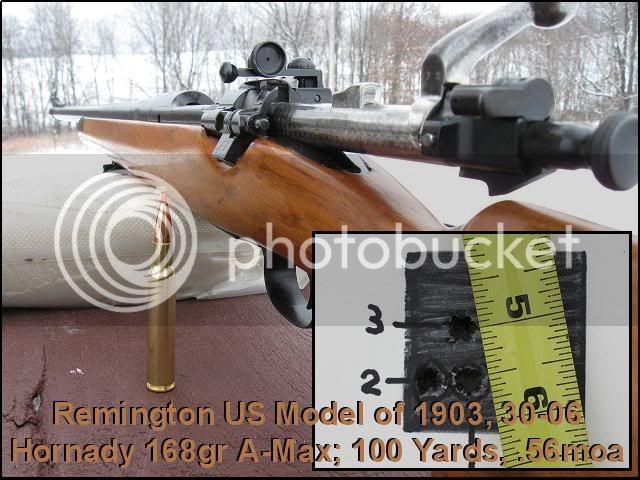